I happen to love surprises. And because my wonderful husband knows this so well, he put together a day full of them for my birthday last week.

To begin the birthday adventures and our Christmas holiday trip, we left the Bay Area in the afternoon on Tuesday and amazingly arrived in L.A. with no traffic at all in under six hours (which is unheard of, if you know anything about the freeway between NorCal and SoCal). That evening once in L.A., we picked up some food and headed to Dave’s sister’s condo in the Los Feliz neighborhood, which just so happens to be close to nearly everything. After a late dinner and unpacking, we hit the hay early to prepare for the next day of fun.

On the day of my birthday, when I woke up, Dave presented to me a pile of envelopes — one for each surprise activity of the day. The theme: Stars!

The first envelope included two tickets to a Warner Brothers Studio Hollywood Tour experience — my first chance to explore the behind-the-scenes of Hollywood, outside of everything that I saw as a Disney cast member years before living in Florida.

Because Dave had let me know the night before I needed to be ready early, I was up, and dressed in my “fancy” casuals, ready to go by 8 a.m. That gave us time to walk just a few minutes to an incredibly tasty breakfast at Stamp Proper Foods just across the street from the condo, where we were staying. I pretty much wanted everything on the menu, but settled for the best avocado toast I’ve ever had, layered with sprouts and spice. Dave ordered a breakfast burrito, which was so big he couldn’t finish it. With happy and full bellies, we left the restaurant and walked to our car and drove the 15 minutes to the studio in Burbank for activity number one. 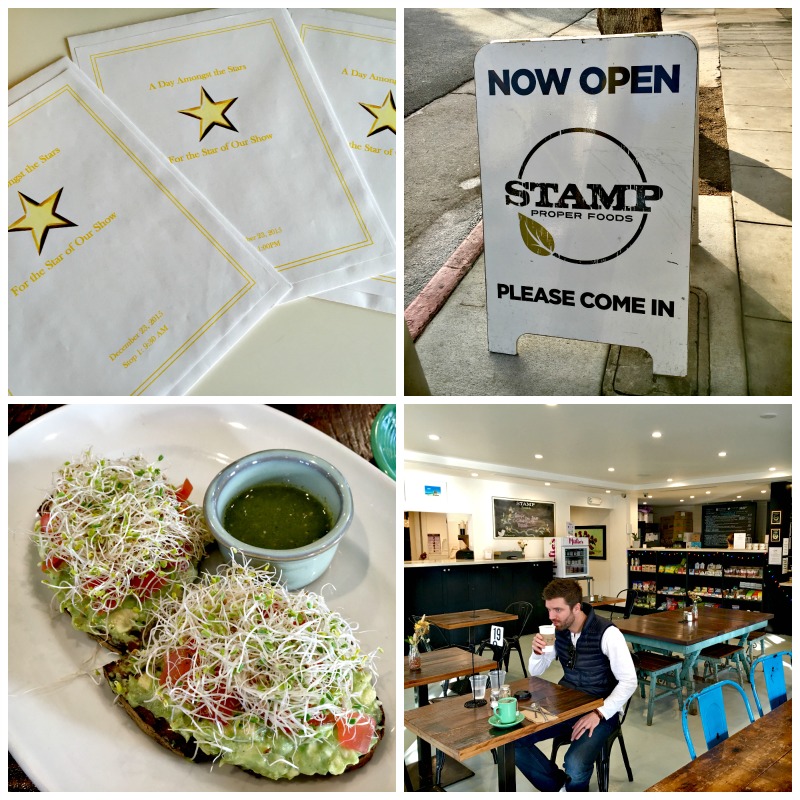 Our studio tour began with a welcome video, then we boarded a trolley, which we jumped on and off of for more than two hours, as we toured the Warner Brothers backlots. During the tour, we not only visited sets used for shows like Gilmore Girls, Hart of Dixie and Friends, which were very memorable and recognizable, but also tons of popular movies. Warner Brothers shoots as many TV shows and movies as possible on this particular backlot site, but also allows other companies to rent the areas out to film. 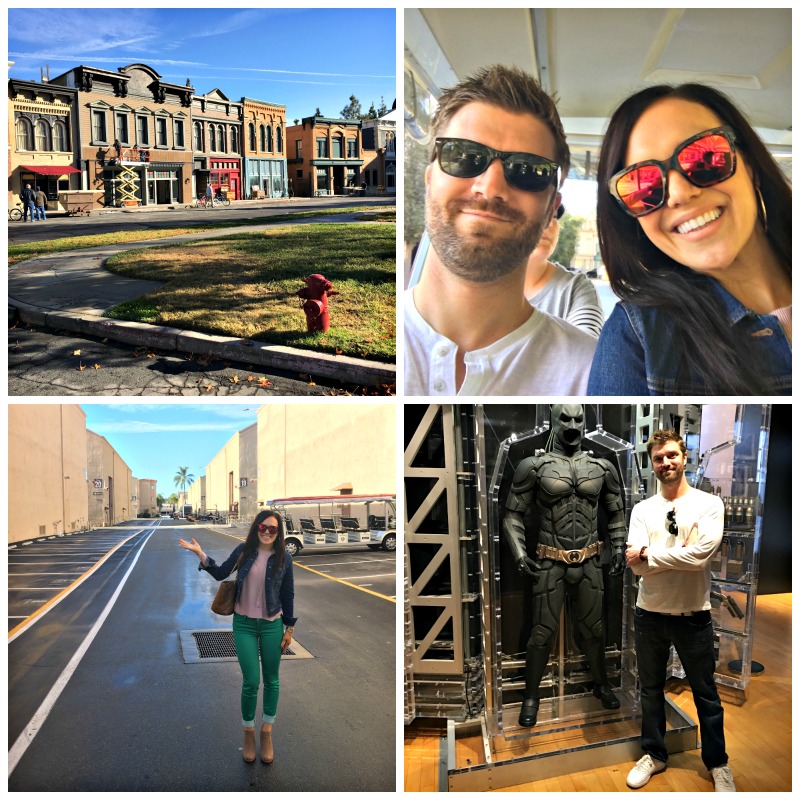 Shown above: The town scene used for “Pretty Little Liars,” “Hart of Dixie” and more, and a shot of Dave standing next to Christian Bale’s actual “Batman” suit.

Most of the buildings are just front facades, and you really can’t get into them at all, which is pretty cool. And the buildings that can be filmed inside are left totally stripped down, awaiting the next production.

During the tour, we also got to visit the inside of the Big Bang Theory set (a show, which neither Dave nor I watch), and Conan O’Brien’s TV set (which looked totally old in person). 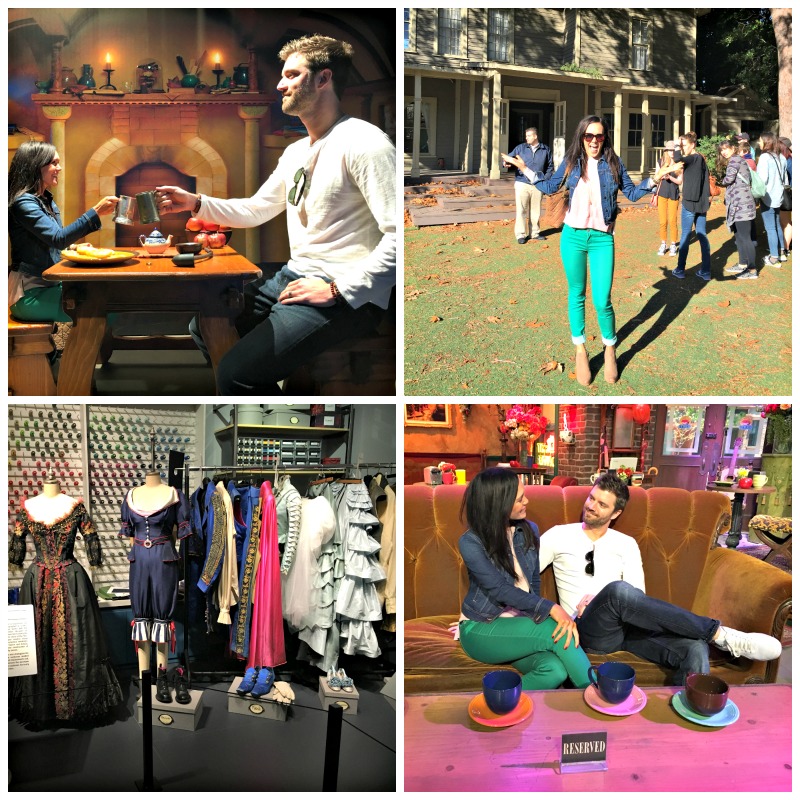 Having some fun in the effects exhibit, look at that perspective? We also checked out the “Gilmore Girls” house, tons of real costumes and sat on the “Friends” couch in Central Perk.

The tour ended with some time in an interactive Warner Brothers experience, where Dave and I listened to a soundtrack production of the movie Gravity, which pulled apart all of the elements that go into producing sound for a movie. We also looked at real costumes from films, held an Oscar (quite heavy) and did some other cool activities. Overall, the Warner Brothers Hollywood Studio Tour is a totally fun excursion. Even though we had no big celebrity sightings, we learned tons of interesting factoids and had a great time. I’d highly recommend it!

When we arrived back to the condo, I opened my second surprise envelope, and it included a picture of Rudy, letting me know that we were going to an outdoor lunch and were able to bring our little pup. The reason behind it? I constantly ask Dave if we can bring Rudy wherever we go, so the ability to include him in my birthday was something that made me very happy.

We walked a few blocks down from the condo to The Alcove Cafe & Bakery, for a most delicious outdoor lunch, (and the site of the amazing blue velvet cake, I was introduced to last year on our first visit to LA). We sat in the cute courtyard, split a tasty chicken salad, each had a day-time adult beverage and then split a huge slice of carrot cake, which was just delightful. Rudy was a very good boy and sat in our laps the entire time. 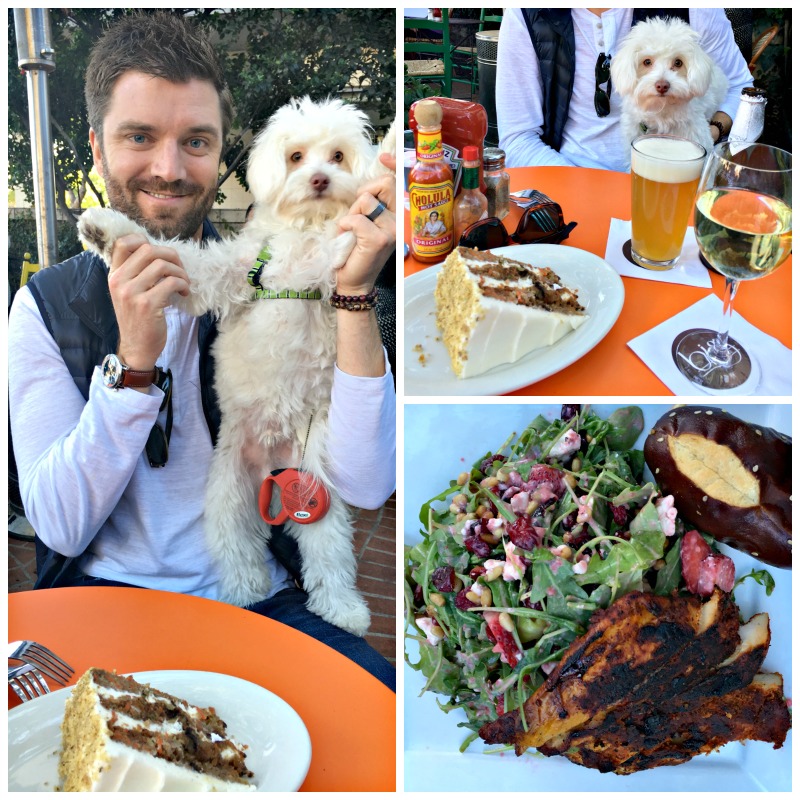 If you’re looking for a good setting and even better food, try The Alcove.

From there, we took a little drive up to the Griffith Observatory for a chance to see infamous Hollywood sign. But it was incredibly busy, so we didn’t end up getting out of the car to hike to the vista spot after all. It’s an activity we’ll put on our list for the next time we’re in the City of Angels, just not around a holiday.

In the early evening, I did a wardrobe change and got ready for the final two events of the night. My third envelope included a picture of SUR Restaurant, and the information that we had an early dinner reservation. And if you don’t know why this is exciting, you’ll see why soon.

We hopped in an Uber and pulled up just a few minutes late for our planned dinner at SUR on Robertson Blvd. First of all, the restaurant looks exactly like you see on TV on The Real Housewives of Beverly Hills, as well as Vanderpump Rules, which are two Bravo shows frequently filmed on site. (And ones I admittedly love to watch!) 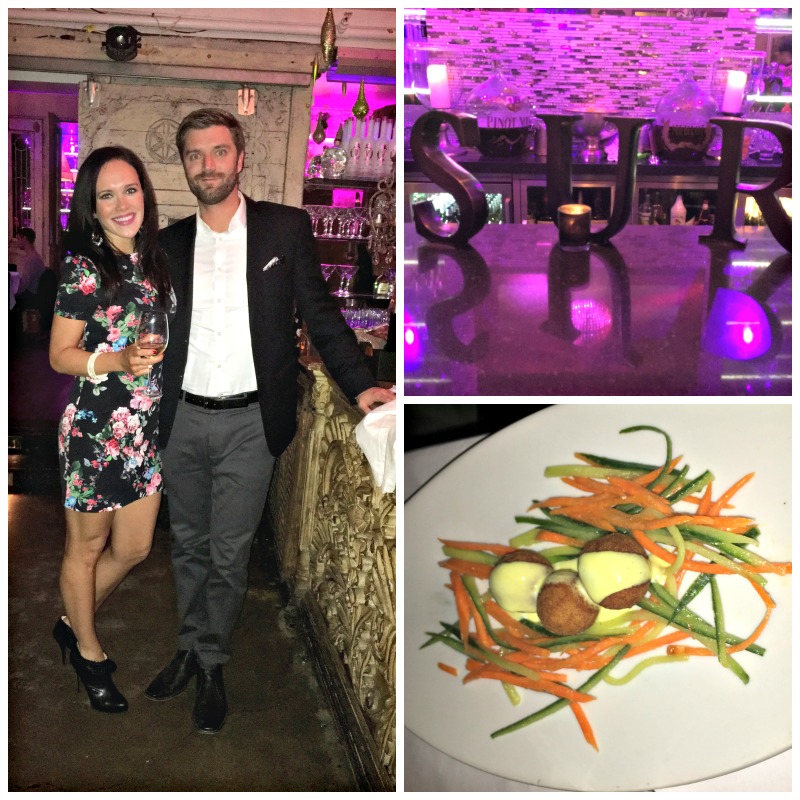 It was super dark and intimate in SUR, so not the best place for photos, but just a few to give you an idea, including the best appetizer of the night.

The interior was so well done, the menu was excellent, and all of our food was delicious. I was really hoping to see a ton of the SUR staff, who star on Vanderpump Rules. But believe it or not, many of those people do not work regular shifts at SUR these days, especially after the show became more popular. However, I did see some supporting characters, like Christina (a waitress who is incredibly tiny in person), and Max Vanderpump (who delivered the appetizers to our table — so it proves Lisa Vanderpump really does make her son work).

The best parts about dinner other than the setting? Dave was texting with my family (who were all together at home in Florida), and they sent me videos singing happy birthday to me. They even had on birthday hats in the videos. I almost cried while watching them, but had a big smile on my face. I missed them during my birthday, but watching their videos helped a lot!

Over the two hours we spent at SUR, we split a couple of appetizers, got our own entrees, and sadly had to high-tail it out of there before dessert to make it to our final event of the night.

The best thing we ate? The fried goat cheese ball appetizers, which I knew to order based on the thoughts of the waitresses on the show. Overall: This foodie gives SUR two thumbs up!

I opened my fourth and final envelope while having dinner at SUR, and it included two tickets to the If/Then production, staring Idina Menzel at the famed and historical Pantages Theatre. I hadn’t heard of the musical before, but the description excited me from the first looks of it — as it’s about a woman who moves to New York and follows what would happen in her life as she made certain choices and their outcomes, which is where the “if” and the “then” come into play. 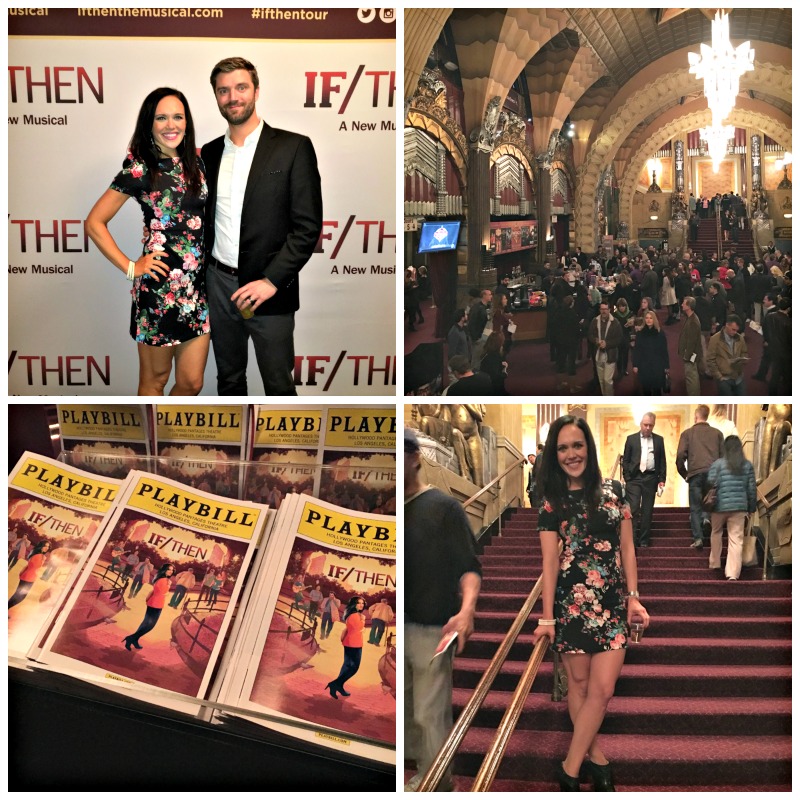 The Pantages Theatre is an incredibly memorable setting for a show.

The theatre, where the play was taking place, was just gorgeous. I absolutely loved the scene, gold ornate structure, red velvet stairs and more. We had some good seats on the lower level and enjoyed the singing, dancing and storyline during the two-hour-plus show.

Idina Menzel (who you may remember from singing the Frozen theme song, as well as Wicked) has some serious pipes, but her voice is so nasally that at times we couldn’t really understand what she was saying. Overall: I LOVE seeing plays, especially ones with great singing and dancing, and this one was super enjoyable.

After the play, we went back home, and Dave and Rudy sang happy birthday to me with a candle-lit blue velvet cake, Dave had gotten earlier at The Alcove. We changed into our jammies and ate the cake, so incredibly content from a day of adventures, perfectly fit for the stars. He did good, my friends. Really, really good! That night, I went to bed one year older and pretty darn grateful for the love in my life.

Have you ever been to Los Angeles?

What would you want to do on an ideal birthday?