I love Saturdays, and I love seafood.

What do those two things have to do with each other? On Saturdays, Dave and I always go out to dinner, and I always order some sort of seafood.

Last night, Dave and I joined some friends for a birthday dinner at Catch restaurant in the Castro neighborhood, which is a ‘hood we hardly ever visit. I ordered a mouth-watering halibut dish and a cucumber cocktail, which were both amaze. 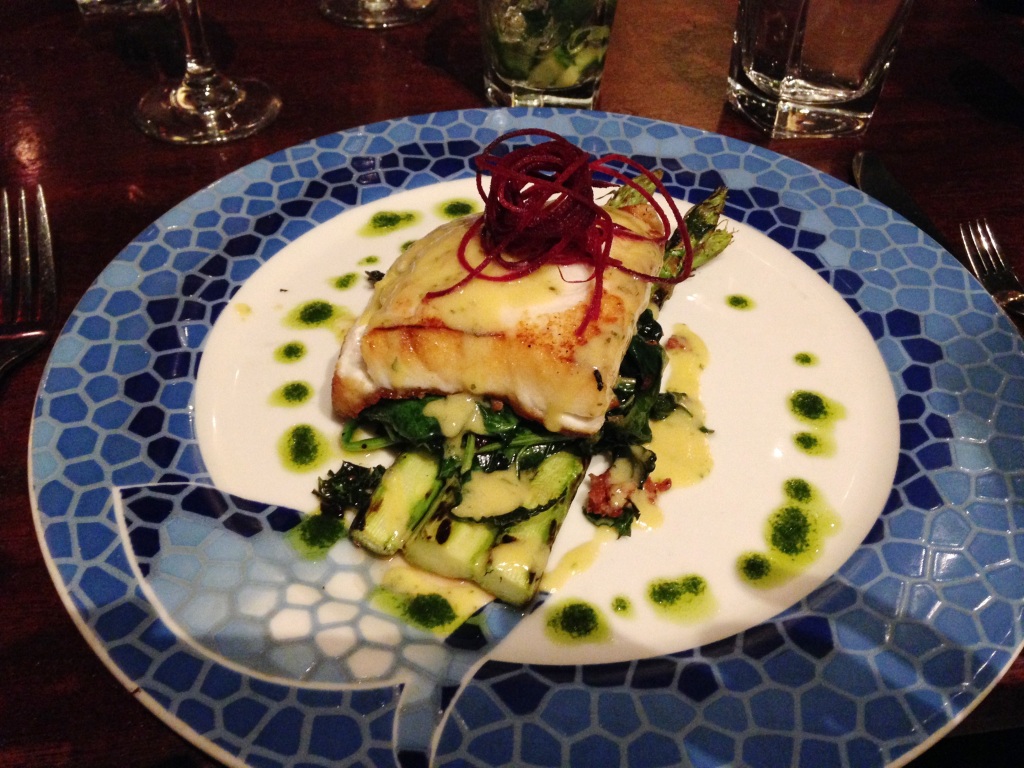 We were there to celebrate our friend Laurene’s birthday. Mike and Laurene are fellow Floridians (Florida State Seminoles, unfortunately) and are the first friends we met after moving to San Francisco. Although we’ve known them for more than a year, we had never met their group of friends until last night. Good people keep good company, and their friends were just as welcoming, chatty, interesting and fun as they are.

There were 11 people in our party, and nearly everyone had some roots or ties to Florida. It was nice to talk about where we were from and share common stories of moving to San Francisco, leaving behind the comforts of the ‘burbs and living a life full of work, fine dining and exploring in Everyone’s Favorite City.

After dinner, the group went to two different bars.

The first stop was a staple gay bar in the Castro, Lookout, where we had to pay a $3 cover. (Why not just round up to $5?) Lookout sits atop a major intersection, and offered great views of the Castro neighborhood. Perhaps that’s where the name Lookout comes from? The decor included a few disco balls, neon lights and, of course, TVs playing a loop of videos featuring scantily clad men dancing.

Here we are at Lookout with the birthday girl …

One of the highlights of Lookout was the colorful and thick straws used in the drinks. I like to use straws, and these were noticeably high-quality. Props to Lookout for that.

The second stop was Swig, a modern bar in the Union Square neighborhood, where there were some great tunes playing.

The highlight of Swig was the photo-booth in the back of the bar. All of the girls in our group decided to cram into the booth with the birthday girl sitting in the center. This was probably the funniest time of the night because there was no warning before the camera went off, and what came out from the printer was a hilarious spread of photos in which we all looked clueless. When we pulled out the final product, we died. In fact, it was one of those laugh sessions that makes your face hurt.

We agreed that the birthday girl got to keep that little gem, so this photo-of-the-photos is all I came away with, and I knew I wanted to share it with all of you.

After a long dinner and patronizing two bars, where it is possible I consumed more than the recommended amount of one alcoholic beverage per hour (whoopsie), Dave and I walked home and entered our apartment close to 2:30 a.m.

And THAT my friends, is the latest we’ve ever stayed out in the City.

People often ask if we like living in Charlotte af

With Thanksgiving coming up in the U.S. next week,

Real talk on food. Every once in a while, I like t

A first for everything. Before we moved to Charlot