Happy Monday! For some of you, it’s a holiday off of work today, but for others, it’s probably business as usual. No matter what your day has in store, I hope you’re starting off refreshed from a nice weekend.

My weekend was just fabulous. On Friday night, Dave and I went to dinner with some friends at Bartlett Hall, which was a lot of fun, and on Saturday, we spent the day wine-tasting in Napa. I’m definitely going to share more details from that trip, but I won’t get into it all right now. Suffice it to say, good times were had.

Because it’s Monday morning, we’ve got to talk fitness. I attended an event yesterday and picked up a few things worth sharing with you all about yoga.

I saw a lot of yogis yesterday.

That’s right, there were hundreds of yoga lovers armed with yoga mats convened at a hotel in downtown San Francisco for Yoga Journal LIVE! San Francisco. Yoga Journal LIVE! holds five events across the nation each year bringing together people who practice yoga from all different levels, along with inspiring speakers, workshops, community programs and more. Although I was invited to check out the full four-day conference, I was only able to make it to the conference on Sunday afternoon. I wanted to go check it out, because even though I’m still an intermediate yogi at best, I’m really trying to get more into it. 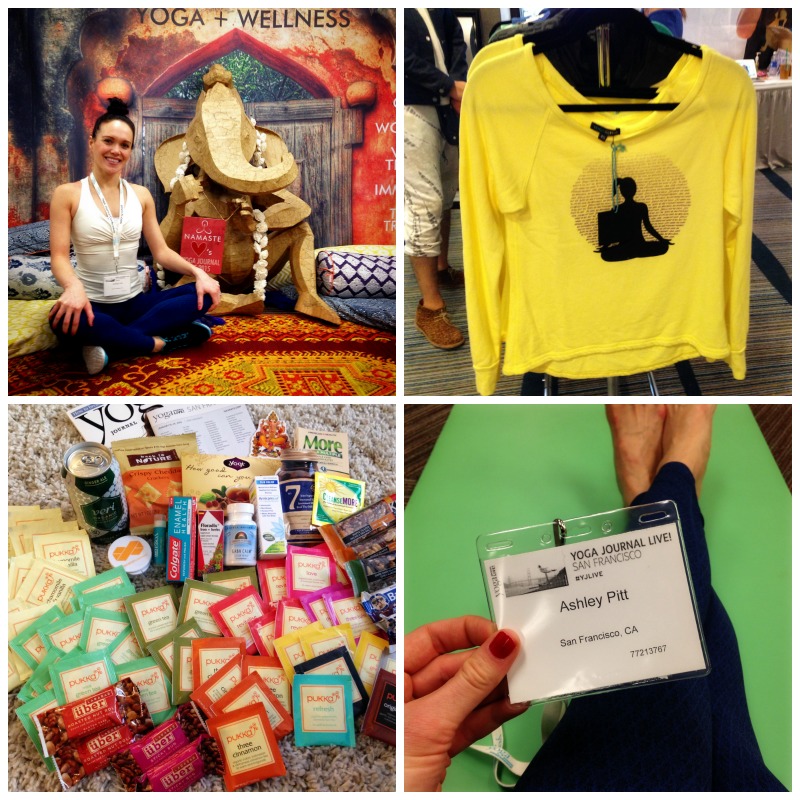 Shown above from top left to right: Me posing with a cool namaste statue, a cute sweatshirt available for sale by a vendor, a look at all the loot in the Yoga Journal LIVE! swag bag, and the one picture I took within the yoga practice ballroom before my session.

During my short visit to the conference, I went to a workshop and yoga class and traversed the exhibit floor. While all of the colorful clothing, in-shape yogis and health-conscious products were fun to see, the biggest thing I came away with is what I learned in the workshop.

Learning to “bandha” and brace the core

The class I chose to attend was “Core Strengthening and Core Integration” led by Deborah Burkman. This class was designed for mixed levels and included some lecture and practice. At the beginning of the session, Deborah asked the attendees how many were yoga instructors and about 80 percent of the class raised their hands. I wasn’t quite sure what I was in for, especially because almost everyone really looked the part, but I held my own and made it through just fine.

Sadly, we were not allowed to take photos in the sessions, so I don’t have a lot to show from there visually. But the learnings? There were a lot. And some of it went over my head. While the main topic of conversation was a term called “bandha,” which I’ll describe later, here are some other high points:

Other than this, most of the talk was about “bandha” — something I’d never heard of until yesterday.

Bandha is a term in yoga meaning “to lock off.” You have to learn to breathe properly in order to perform bandha, which is sort of like pulling your belly in to brace your core during practice and keeping it tight. You can practice bandha in different parts of your body, including your pelvic floor, mid-abdomen and throat. We focused on the mid-abdomen bandha, although advanced yogis focus on all three.

During the two-hour session, Deborah not only spoke a lot about how “bandha” helps you perform better, but she also showed the class examples of what it looks like and feels like to have bandha or not, while going through yoga flows and poses. She and her assistant walked around touching our midsections to see if we were in bandha or not. And I’ll tell you what, it wasn’t as easy as you would think to get into the right position all the time. I realized that although I know to brace my core, I may not be doing it as much in yoga as I should.

We started out practicing breathing and went through some yoga flows, trying to properly stay in bandha with our cores locked in. We also practiced Chatarunga, which is the yoga push-up to low plank move, quite a few times. True story: Deborah gave us some pointers that helped me to fix my Chatarunga and feel totally different.

Here’s what she told us to do: When you set up, hands under shoulders in plank position, squeeze your armpits in, push your hands into the ground to activate your shoulders and lean a bit forward, eyes up as you lower your body down slowly. Of course, all of this is done while in bandha, with your core locked in. Yes, this seems like a lot of weird information, so maybe you had to be there to get it. But I definitely feel like my entire yoga practice will be improved by this one fix, due to the fact that most of the classes I attend include a ton of Chatarungas. So thanks to Deborah for that!

After the session, I walked around the expo a bit more before calling it a day. While I would have liked to tried some more classes and workshops, I think I learned enough in just that singular session. I mean, I didn’t want to bite off more than I can chew, or bandha.

Funny thing, as I was walking down the empty streets of the Financial District heading home from the event, I ran into the fabulous Caity and Kat, who were taking a stroll with Kat’s dog. As usual, I was frazzled, slightly sweaty and carrying a lot of bags – a complete mess. As usual, they were both impeccably put together. Oh fashion bloggers, how do you do it?

Staying on top of my 2015 goals with yoga

Nonetheless, my relationship with yoga is ever-changing, and it’s heading in the right direction. As I set out to do in my goals, I’m practicing at least once a week, getting a little more flexible and really trying to keep it up. Oh, and I now have my own yoga mat and some cute yoga clothes, so that helps too. Namaste! (If you’re into yoga, head over to my fitness page to see my reviews of local yoga classes.)

Alright, if I lost you there with all that yoga talk, here’s a look at all of the ways I worked out during last week. 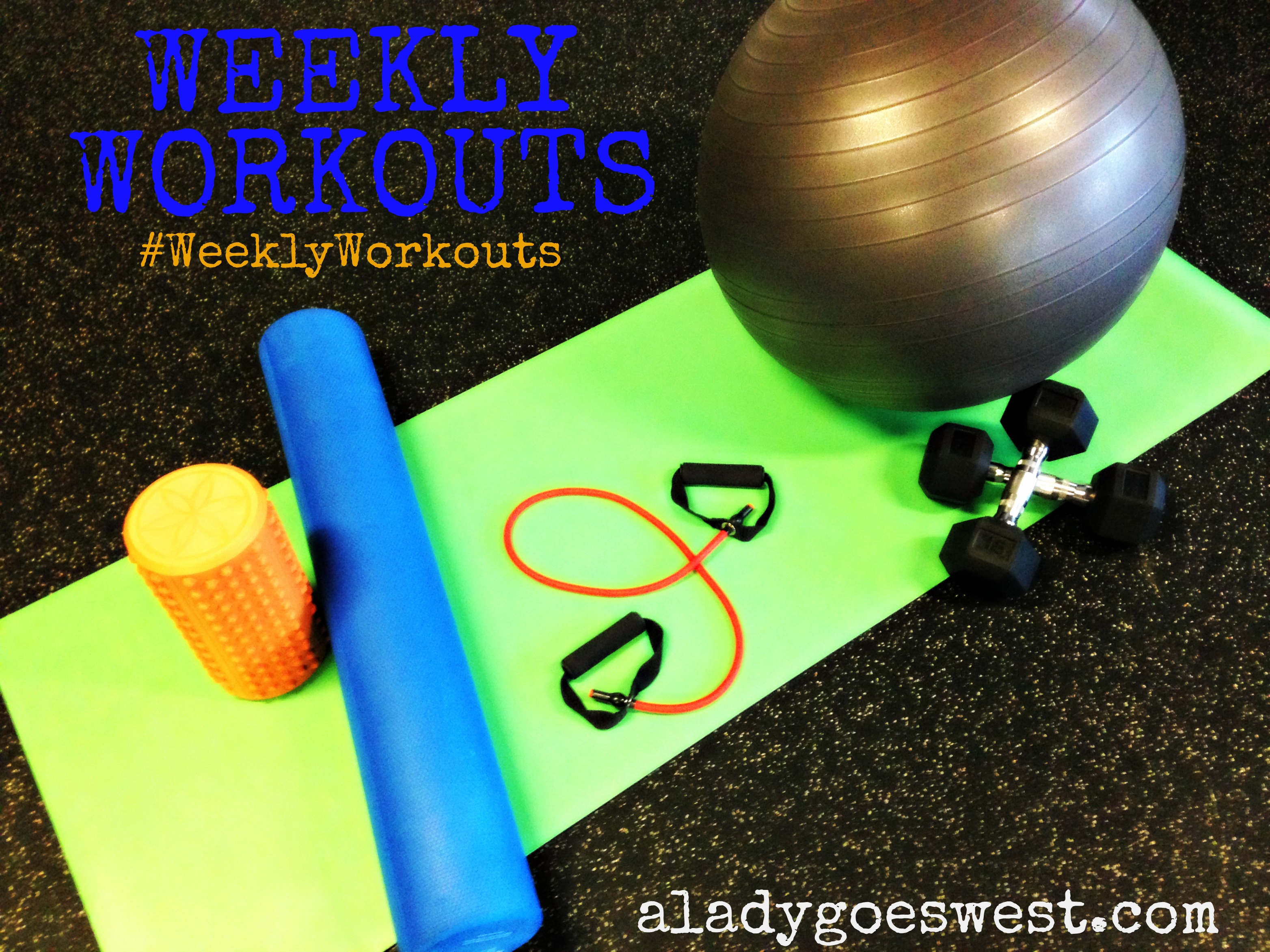 This past week, I had a great selection of workouts. I hadn’t taken a Les Mills GRIT class in more than a year, so was glad to be back in the group fitness room for that session, which was super intense. I also did some yoga, Pilates, a bootcamp utilizing ropes, kettlebells and medicine balls, a weights session, two BODYPUMP classes and a BODYATTACK class. No two days were the same, and I used a ton of different tools. Even though I did something every single day, the volume of workouts this past week was much less. Only 30 minutes on Monday, 2o minutes on Saturday and very light exercising on both Friday and Sunday with Pilates and yoga. Neither was strenuous, nor lengthy, which means it was like built-in recovery. I felt good!

I only got in two straight cardio sessions this week, which is more than the one cardio session I got in the week before, but I probably should have done a third. However, everything else was pretty balanced. I’ll call this week a strong one.

Oh by the way, thank you for everyone who entered my giveaway to win the RumbleRoller. Congratulations to fellow blogger, Becky, who was the winner!

That’s that, friends! It’s a holiday for both Dave and I today, so I’m not quite sure what we have on tap. I hope you enjoy your day and come back soon to check out my recap of our trip to Napa.

Do you ever practice yoga? What’s one workout you did recently? How was your weekend?