A while back I mentioned that Dave and I are on a mission to take advantage of our great City. Even though at times we’d rather sit on the couch on Saturday afternoons, we’re making an effort to see all there is to see and get out there more, like we did the first year we moved to San Francisco.

On Saturday mornings, I teach my regular BODYATTACK class each week. And although a weekend is always better when it starts with a good sweat session, teaching that class does mean we get a later start on our adventures. Nonetheless, this Saturday, after I got home, we packed up a backpack, put on some summer clothing and hit the road for the annual Hardly Strictly Bluegrass Festival in Golden Gate Park.

Hardly Strictly Bluegrass is one of the few totally free and open-to-the-public festivals that takes place in the huge San Francisco Golden Gate Park every year. Because it was one of the hottest days of the year in the City, the estimated 700,000 people who attended along with us, were sweating, donning their tank tops and seeking shade under the tall trees of the park. Golden Gate Park is in the foggy part of the City and is oftentimes much cooler than other parts, but not so much this weekend.

It was a fairly long cab ride to get over to the other side of the City where the park is located. And because it was so busy,  we actually hopped out of our cab early and walked through the park to the Lindley Meadow, where the festival was taking place. It was pretty weird to arrive to an event and not have to go through a line, hand over your tickets or have your bags checked, but neat at the same time.

We quickly moved through the crowds and found a sunny spot, set out our blanket and enjoyed some adult beverages and nibblies in a sea of people. There was no alcohol sold at the event, and so you were allowed to bring in coolers of beer and wine, but no glass bottles. We followed the rules of course and came with a Styrofoam cooler, red solo cups, beer and bubbly. Food was available for purchase, but we didn’t buy any, because we came pretty stocked. 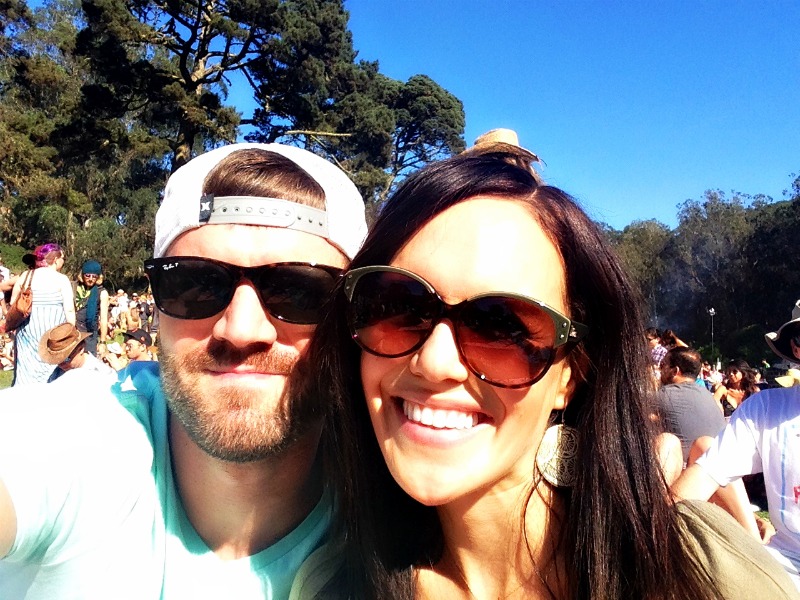 Happy campers excited to experience another festival in the City. 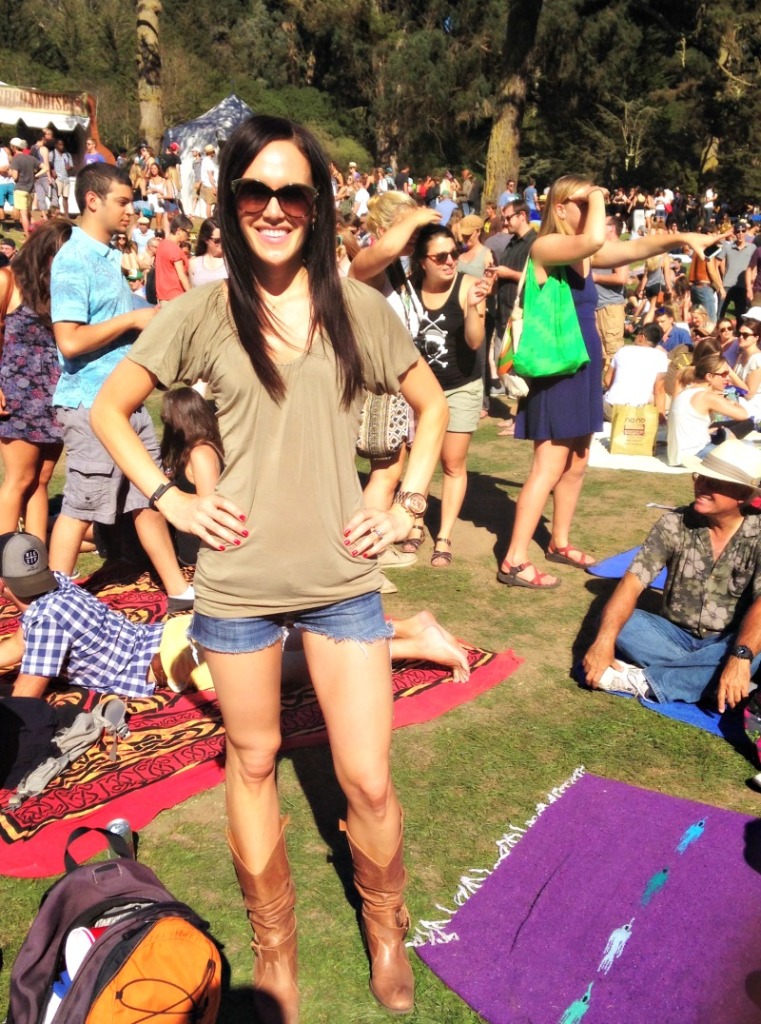 I haven’t pulled out my jorts in a long time, and I enjoyed every minute of them.

I couldn’t believe how hot it was. The temperatures nearly reached 90, and in direct sunlight that meant we were getting a little bit sweaty, which is just not something we’re used to anymore. But it was worth it, because we got to take in this scene …

Awesome panoramic shot of the stage and crowd at Hardly Strictly Bluegrass.

There were seven stages and more than 100 performing artists over the three-day festival, but Dave and I chose to stay at one stage and only caught a couple minutes of live music. We arrived during a break and then left during a performance. Clearly, we weren’t there for the bluegrass, although we did hear some banjos playing, and they were lovely.

I think I say this every single time Dave and I go to a festival or event, but the people watching was to-die-for. This was one of the best. We sat back on our blanket, chatted and just took it all in. San Francisco never disappoints.

During that time, I saw some people walking around with a coconut drink and had to get to the source of it. There was a dread-locked guy, who was popping open real coconuts, pouring in rum and selling them for cash out of a small cooler. Clearly he was a rogue salesman, but I couldn’t pass up the opportunity. Even though I only had $10 to my name, I put it all towards a coconut for Dave and I to share, and I’m so glad I did.

I got to drink some of the real coconut water out of the coconut before the clever vendor poured in the rum. And after we finished it, I ate all the yummy coconut insides. What a treat. 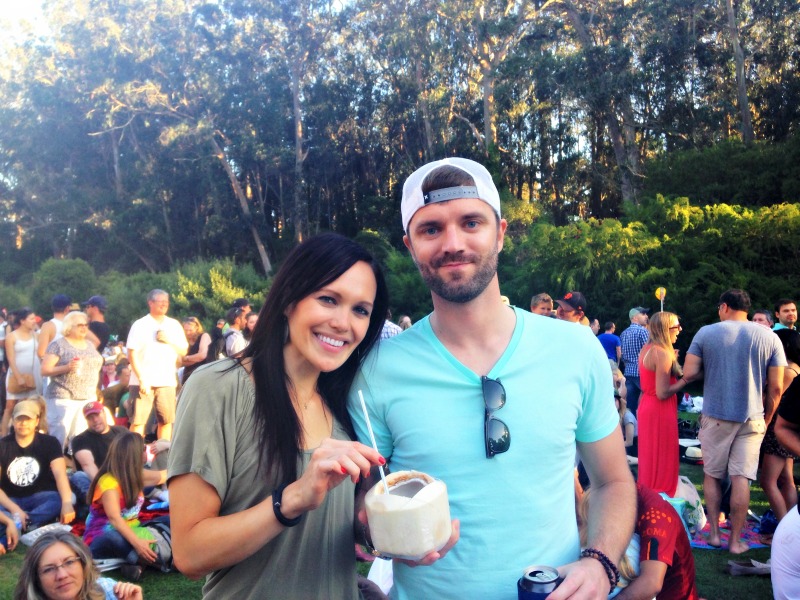 The best $10 ever spent to get this coconut filled with rum.

Catching the sunset at Ocean Beach

We sat around for a couple hours, eventually making friends with our neighbors, and then had the crazy idea to head to the beach for sunset. We packed up and left right when Chris Isaak (probably one of the best known acts of the weekend and a local Bay Area native) was hitting the stage.

On our walk to the beach we found an abandoned skateboard. I hopped on it, and Dave assisted me down the sidewalk for nearly a mile. It was hilarious.

It was just under a mile to get to Ocean Beach, and we arrived at the perfect time. We weren’t the only ones there to enjoy the sights. It was warm, breezy and as orange as can be as the sun drifted down under the horizon. Such a gorgeous view … 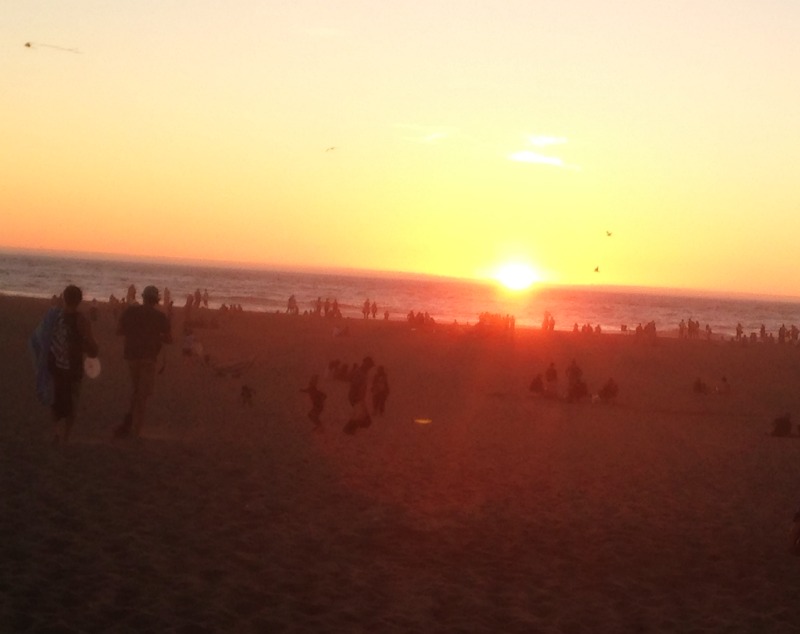 The sun setting at Ocean Beach just before 7 p.m.

After the beach, we grabbed dinner and dessert nearby and took a cab home. We were tuckered out and in our beds by 10 p.m., a little sun-kissed and super happy with our choice to attend the festival.

Saturday was one of the most fun days we’ve had in a long time. We got out, we laughed, we explored, we drank some random rum-filled coconut, we skateboarded and we put our toes in the sand. All in a day’s work. City living sure is a good time.

Have you ever been to an outdoor music festival? When was the last time you enjoyed the sunset? And finally, do you own jean-shorts? Because yes, I do.