Hello, hello, my friends! I hope your week is off to a great start by now. This is a busy one for me, seeing as I’m teaching nearly 20 group fitness classes over the next six days (three complete on Monday)!

Today, I’m here to tell you about a few fun things I did over the weekend, which all deserve their own screen-time outside of yesterday’s post about balance and my weekly workouts.

A beautiful day for a rooftop workout with POPSUGAR

On Saturday morning, I drove to the North Beach neighborhood of San Francisco to participate in the first POPSUGAR Class FitSugar, held on the gorgeous rooftop of the San Francisco Art Institute. 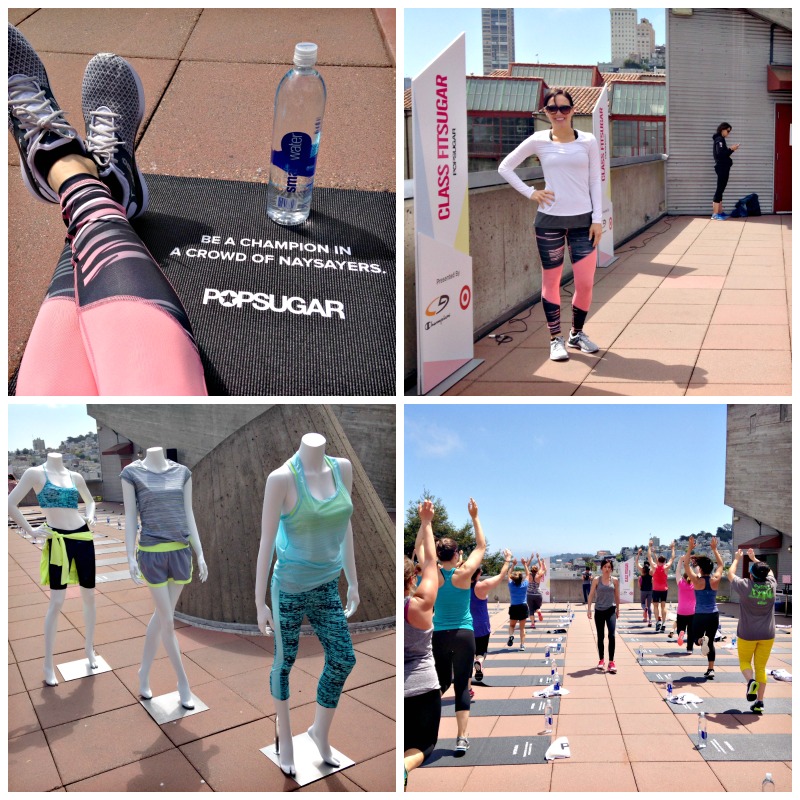 Scenes from the breezy rooftop, where the Class FitSugar took place.

This event was sponsored by C9 by Champion for Target, and all of the attendees received an adorable hot pink sports bra. I wore mine yesterday to teach classes and loved it!

POPSUGAR’s FitSugar site is launching a newer and convenient way to search, source and find workouts, and to kick off that initiative, the team is hosting a few free Class FitSugar events throughout the year in different cities. Because POPSUGAR is headquartered here in San Francisco, of course, we were lucky enough to be the first. (Oh living in the Bay Area sure has its perks!)

The class was taught by Lisa Corsello, who is the owner of a group of studios around the Bay Area called Burn. While I’ve never been to a Burn studio before, I know that the one-hour workout is a mix of Pilates, cardio and strength-training, using various equipment.

Lisa took us attendees at Class FitSugar through an abbreviated 30-minute bodyweight workout, featuring Pilates-inspired core work, burpees, push-ups, lunges, jumping jacks and more. While it wasn’t terribly difficult, I enjoyed those moments of “burn” in bottom-half pulsing movements, which reminded me a bit of a barre class. I also enjoyed the stretching and breathing that Lisa emphasized. There was some upbeat music on the speaker and incredible views, which totally elevated the experience. Lisa moved up and down the aisles, motivating people and keeping us in motion without a break for the entire session. Good stuff! 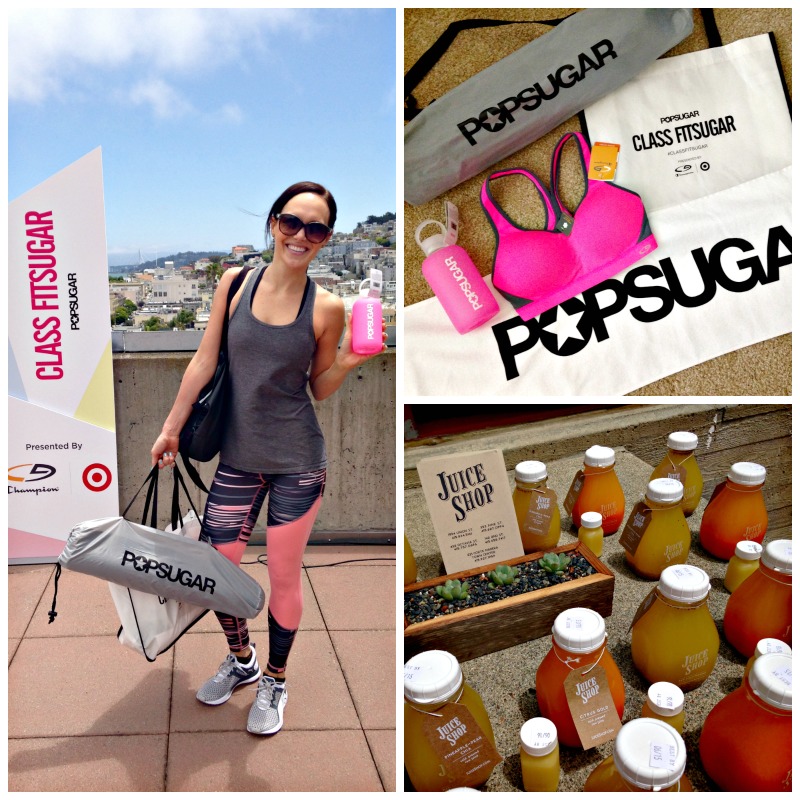 Just look at that setting and all the POPSUGAR-branded swag? A good time indeed!

After class, I not only talked to Lisa, but I also chatted with a few of the POPSUGAR gals. I grabbed some fresh juice, then collected my swag and drove home. I really appreciated the invitation to take part in a fun and totally free event by POPSUGAR, and I look forward to more.

As I was leaving on Saturday, the North Beach festival was in full swing, (a fun event that Dave and I have attended before), so the traffic was pretty rough getting out of the City. Yet, I was still home in time to join Dave for some afternoon relaxing …

On Saturday afternoon, Dave and I laid out by the pool for a bit, which is a completely bizarre thing for us. While living in Nob Hill in the heart of San Francisco for the past few years, we not only did we not have access to a pool, but it was also far too cold for that kind of thing. However, just over the Bay Bridge in the East Bay where we live now, the weather is completely different. We enjoyed soaking up some Vitamin D and even met a new neighbor while lounging. I was pretty tired after all that sunshine, and once we came inside, I fell asleep on the couch for a bit with Rudy (our new little maltipoo) in my arms. I woke up to find that Dave had taken a funny picture of the two of us snoozing.

On Saturday evening, Dave and I put little Rudy away in his crate, then the two of us went out to dinner at Eleve in downtown Walnut Creek, a Vietnamese place, which looks really cool from the outside. We had an 8 p.m. reservation and were seated at a cozy table in the middle of the restaurant. 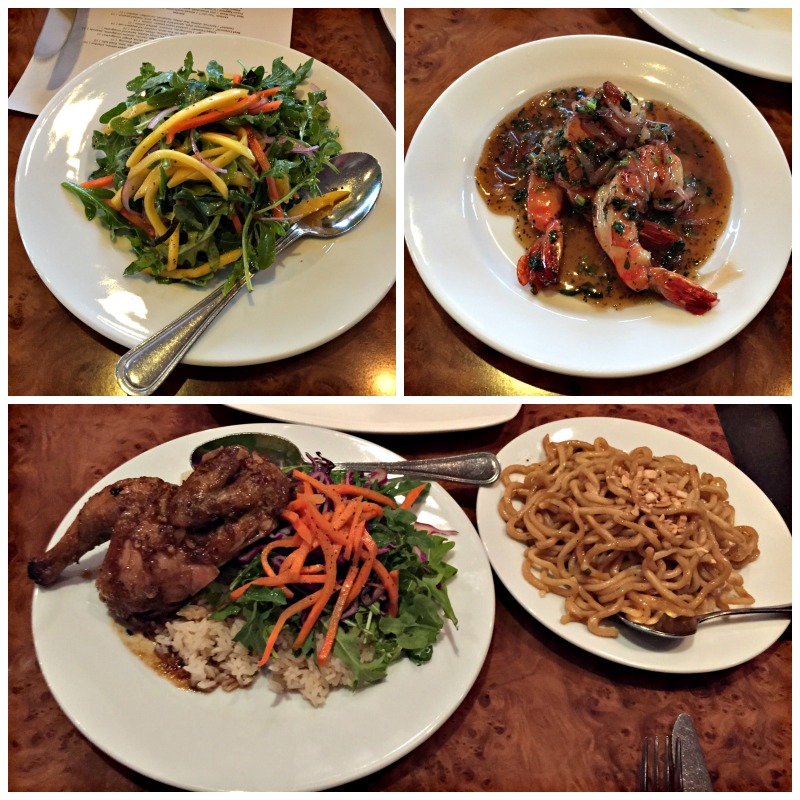 Because the menu was designed for sharing, we ordered four “small plate” items at Eleve, including a mango and arugula salad, sautéed prawns, half of a roasted hen with rice and salad and some incredibly delicious peanut garlic egg noodles. I didn’t want to get the noodles, but Dave insisted, and let’s just say I was the one who finished them off!

Eleve was a little brightly lit for our taste, but the service and food were both excellent. Another great dining experience in the East Bay, which makes us foodies very happy.

Getting a “W” at home in Oakland

On Sunday, we both did some chores and work for the first part of the day, then headed to the Golden State Warriors Finals game in the afternoon. Dave left much earlier than I did, because he had to work at the game. However, I hitched a ride with friends and took the BART to Oracle Arena in Oakland, enjoying every minute of the scene. 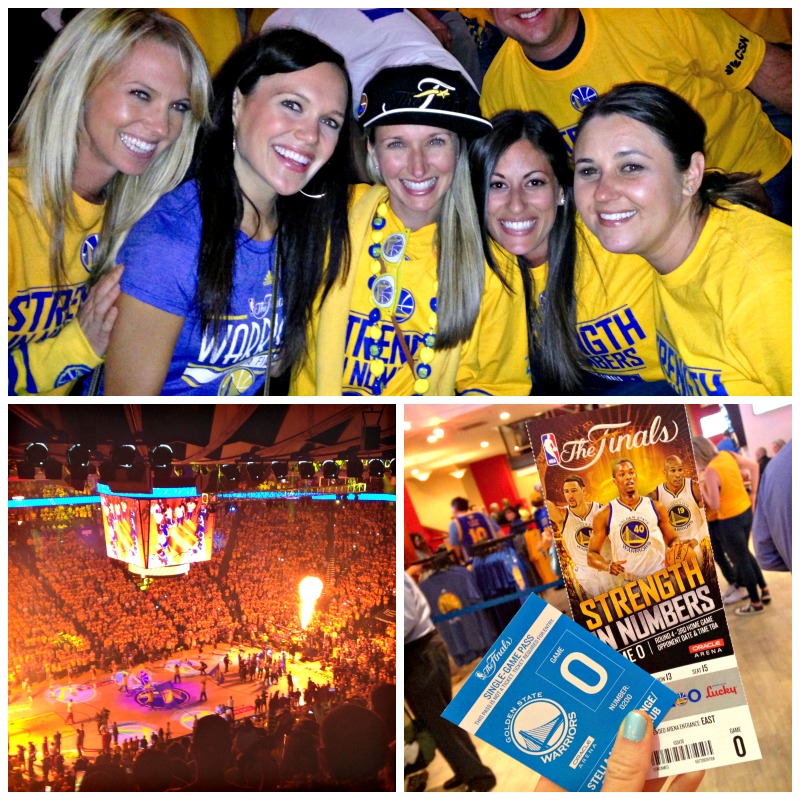 The usual crew, I sat with a bunch of other wives of Warriors employees, and we had a great time together cheering on our team.

The fans were crazy, the game was fun, Metallica played the national anthem, and the Warriors won! Even though I had fun at the Finals game last Sunday as well, it’s much better to be on the winning side. We sure are grateful to be a part of the Warriors world right now. Tonight is Game Six, and if the team wins, they become the champs! Go Warriors!

And there you have it. Some special weekend activities worth sharing. I’m off for now, my friends. This morning, I’m teaching two early Orangetheory Fitness classes, doing some work and then teaching BODYPUMP tonight. Enjoy your day!

What’s the coolest setting you’ve enjoyed for a workout?