Hello! I have so many class reviews to share with you, that I figured I’d pop in on a Sunday. And before I get going: Yes, there was an earthquake last night in the Bay Area, and no, Dave and I didn’t feel the shakes. Although plenty of our city friends did wake up and feel their buildings wobble, we slept right through the natural disaster and nothing seemed out-of-place when we woke up.

Now, on to one of my recent class experiences …

Here’s what I came away with: There’s a workout out there for everybody.

Last week, I attended a noon “ele_SCULPT” class at Elevate Fitness in the Hayes Valley neighborhood of San Francisco, and it was definitely different than any other class I’ve ever attended.

Elevate Group Fitness is a fairly young local company with two locations in the City, offering three different types of “ele” classes, which are all a fusion of Pilates, yoga, barre and resistance training.

When I hopped out of my cab at the studio’s street address, I was actually entering a wellness spa. 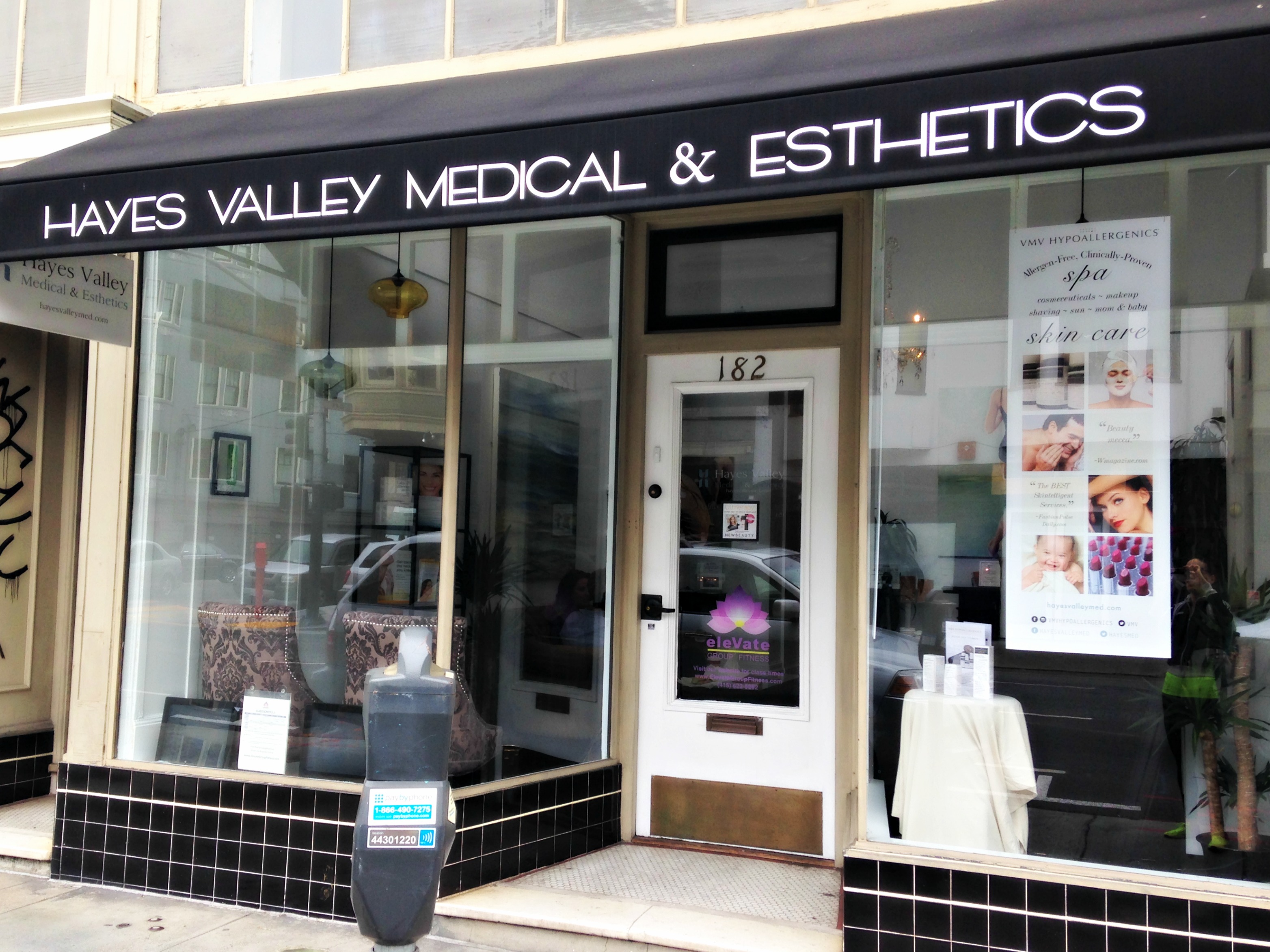 That’s because the Elevate studio occupies the basement floor within another operation. Unfortunately, that set a negative tone for me. When I entered, the receptionist told me to wait for the instructor to get there and had me take a seat. Customer service disconnect for sure.

However, just a few minutes later, the instructor, Jada, arrived, had me fill out a waiver and took me downstairs to an awesome studio space. Things started looking better … 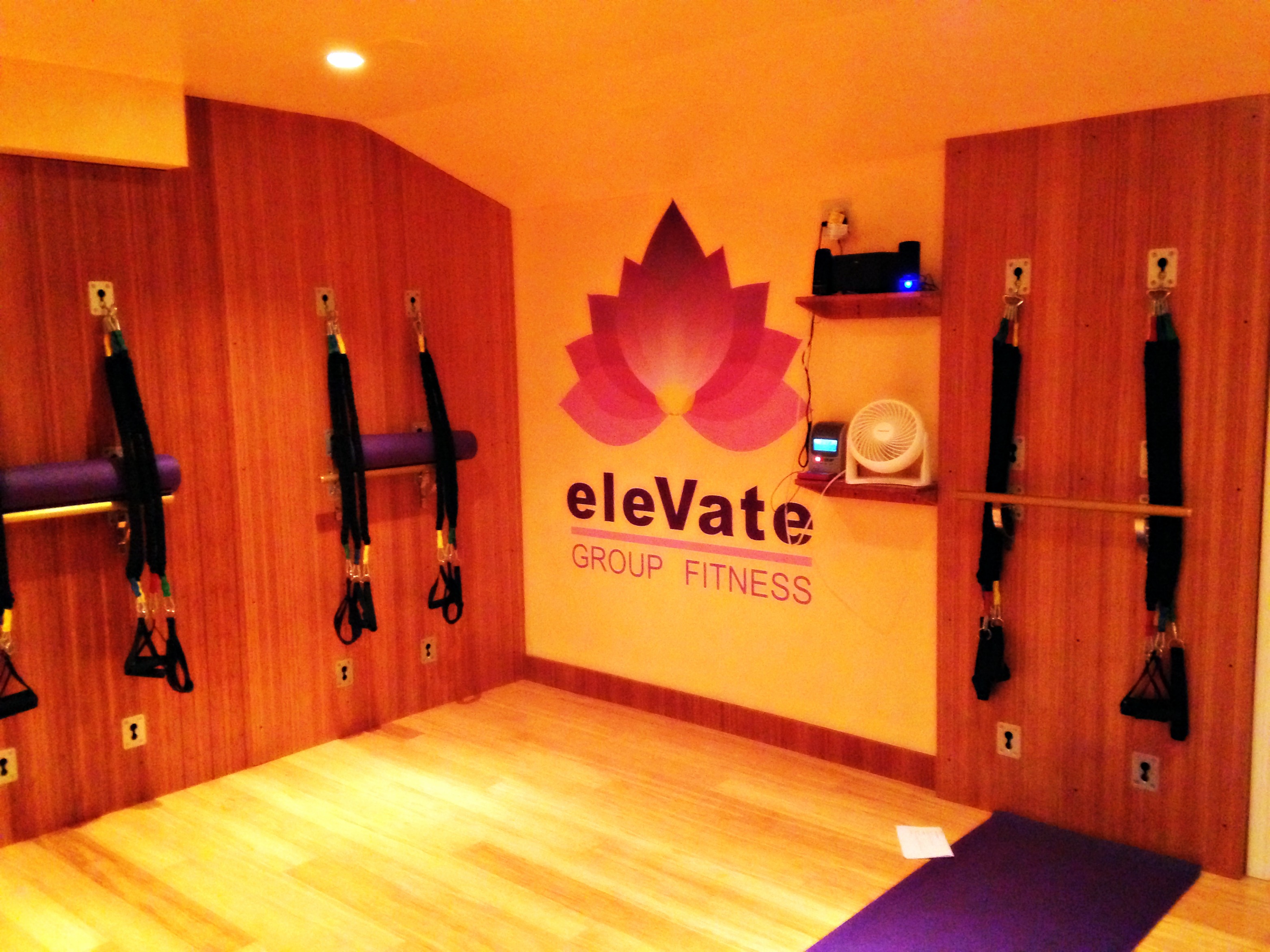 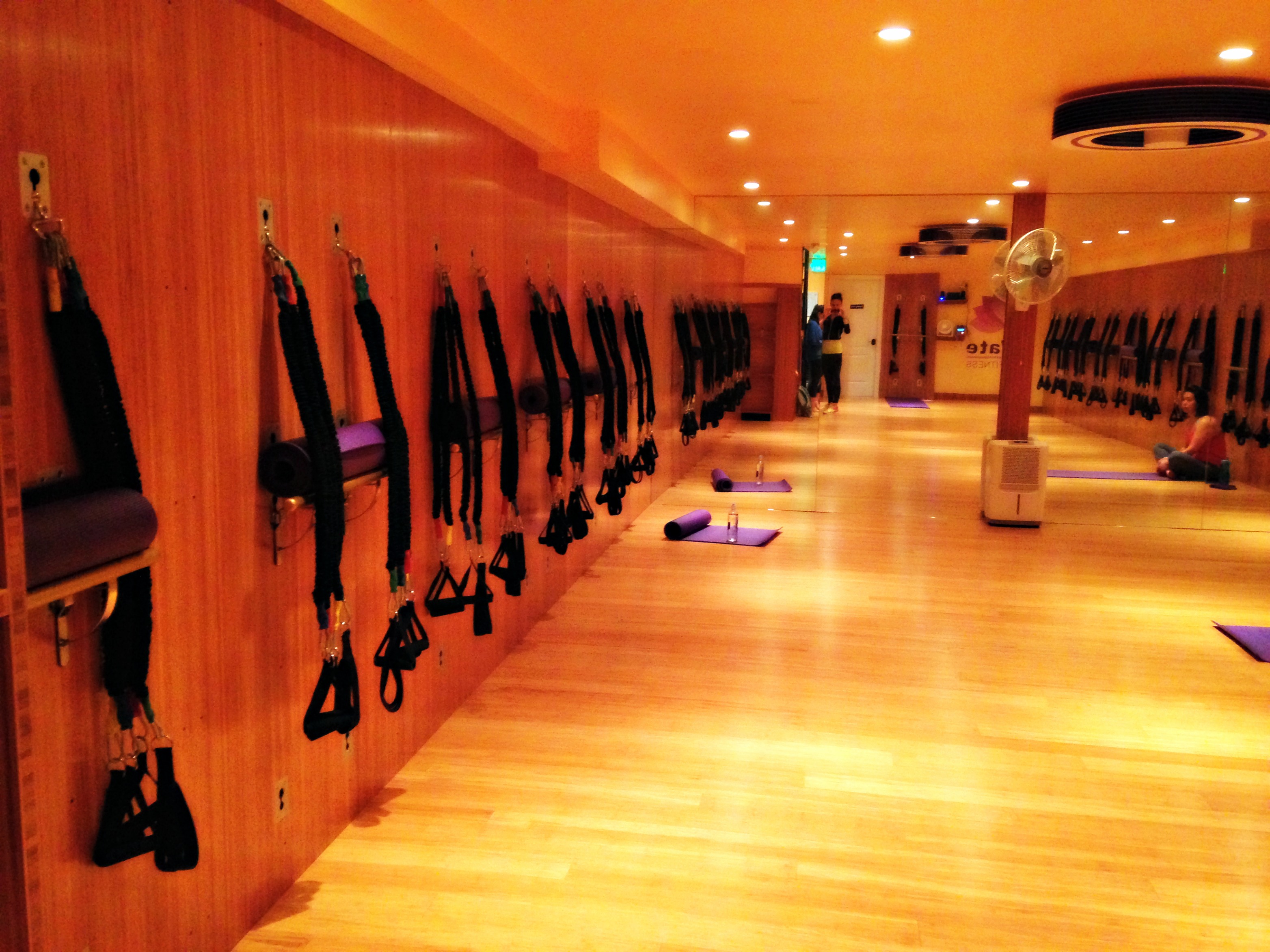 The space was much larger than I expected, especially from the looks of the wellness spa lobby above. While it was a little dark, it seemed to fit the mood. It’s set up with 16 stations on the wall, meaning all classes max out at that many students, giving Elevate a small group feeling.

Once I was able to sneak in a few photos, I took off my shoes, stored my backpack in a cubby and went to a station to await further instructions. There were only three other participants (all women) that day, and we all waited in a seated position on our mats.

The instructor put on some light techno-spa-type music on an iPod dock and we got moving. She stood at the front of the room and did all the moves with us and didn’t need to use a microphone.

The class started out with the instructor saying a motivational quote, which she read from a piece of paper. She pulled that same paper out at the end of class and re-read it. While I appreciate the effort in that, it just didn’t stick for me, especially since she actually fumbled on some words. (Am I being too harsh here? Perhaps that whole lobby thing was still bothering me at that point.)

Moving on, I really liked the equipment and efficiency of setting up in front of a station with so many tools. Each station on the wall includes resistances bands of different difficulty levels, a mini barre and a mat. We moved the barre and bands up and down on the wall as needed throughout class. It was all very user-friendly. 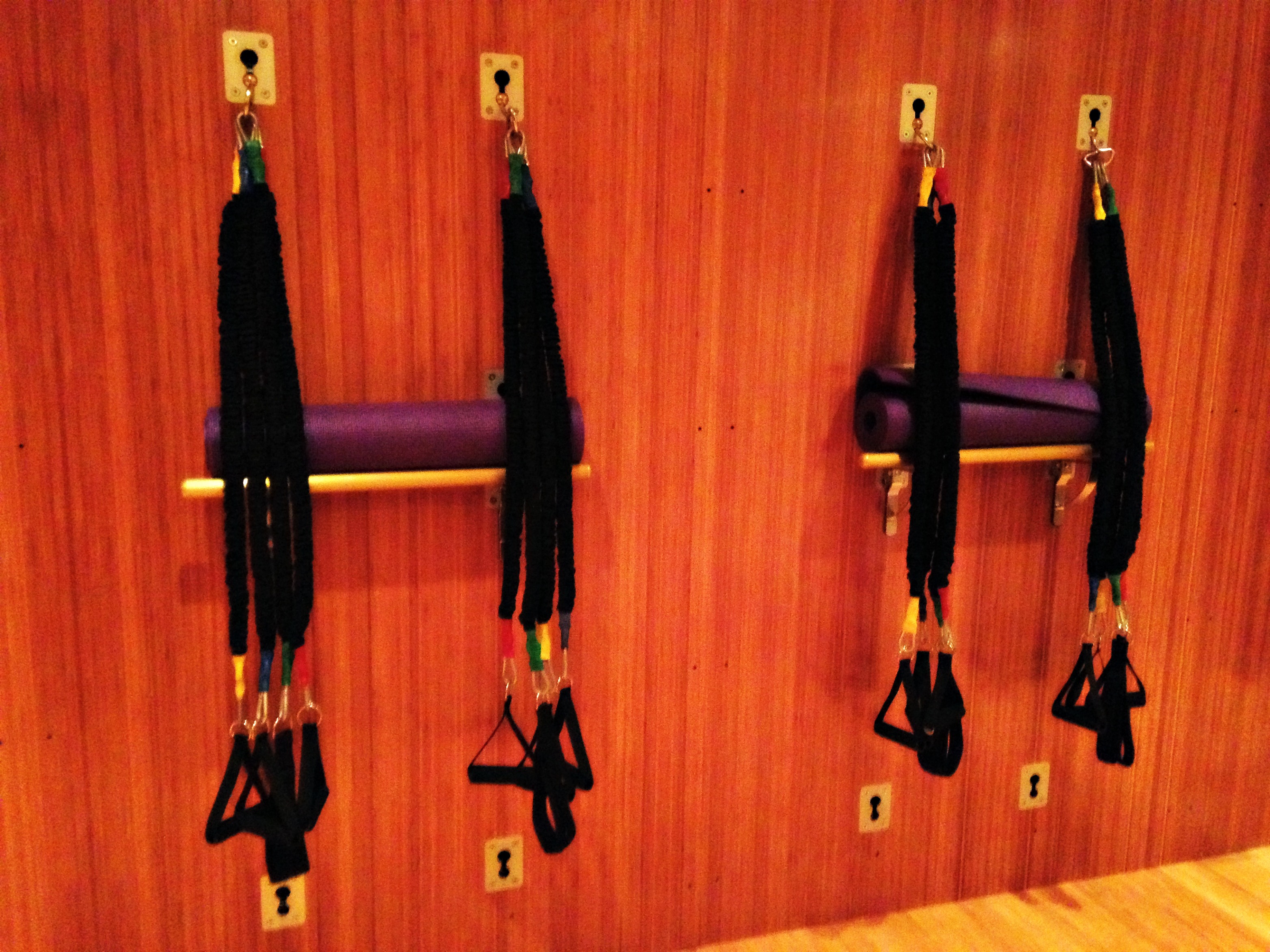 The class moved fairly quickly, but it seemed like we tried to do too many different types of things, thus not spending enough time on anything. This is completely opposite of the hard work I’ve done as of late in Cardio Barre and Pure Barre, in which total muscle fatigue is achieved in each set.

For instance, we started with about 10 minutes of yoga to warm up, then we did a 10-minute cardio section with jumping jacks, burpees, side arm raises and leg lifts, which was not hard at all. Right before my heart started beating quicker, we moved to our little mini barres and did some squats and lunges. From there, we used the resistance bands on the walls for arm work, including rows, chest presses, tricep presses and bicep curls. Then, we went down to the ground and did some plank variations for the core. And we finished up with crunches and more stretching. The class ended in a meditation and a traditional yoga closing.

Everything we did was very gentle, with only a moderate amount of effort required. I got my heart-rate up a bit, but even when using the heaviest resistance and taking the “level two” options offered by the instructor, I never felt fully exerted. But I felt good. While the class definitely offered a variety of cardio, light resistance work and stretching, it just didn’t seem all that cohesive, especially because at the end of every section we took a 30-second water break.

For someone who gets bored easily in a class with one format of exercise, ele_SCULPT would be great. But for me, not so much. I looked over the Yelp reviews of Elevate Fitness before and after I took the class, and apparently I’m alone in my thoughts. People seem to love this gym and this style of workout. The other reviews are all very positive.

And of course, there is a place for Elevate Group Fitness classes out there in the world. You don’t need to go hard during every workout, and sometimes you want some variety outside of strictly yoga for mind/body moving. The fact the bands are incorporated means there is a little strength-training (which everybody needs), and it because it’s all low impact (outside of those burpees in the cardio section, which didn’t seem to fit), anybody could do it.

I won’t be going to another Elevate Group Fitness class, but I’m glad I experienced it. I came away refreshed, and felt like I got a taste of a workout that I may choose to do a little later in life when my body decides it’s no longer going to let me teach BODYATTACK anymore. But hey, let’s hope that is many, many, many years away.

The best part? As a first-timer to Elevate, I was given this lovely purple bracelet for my efforts. 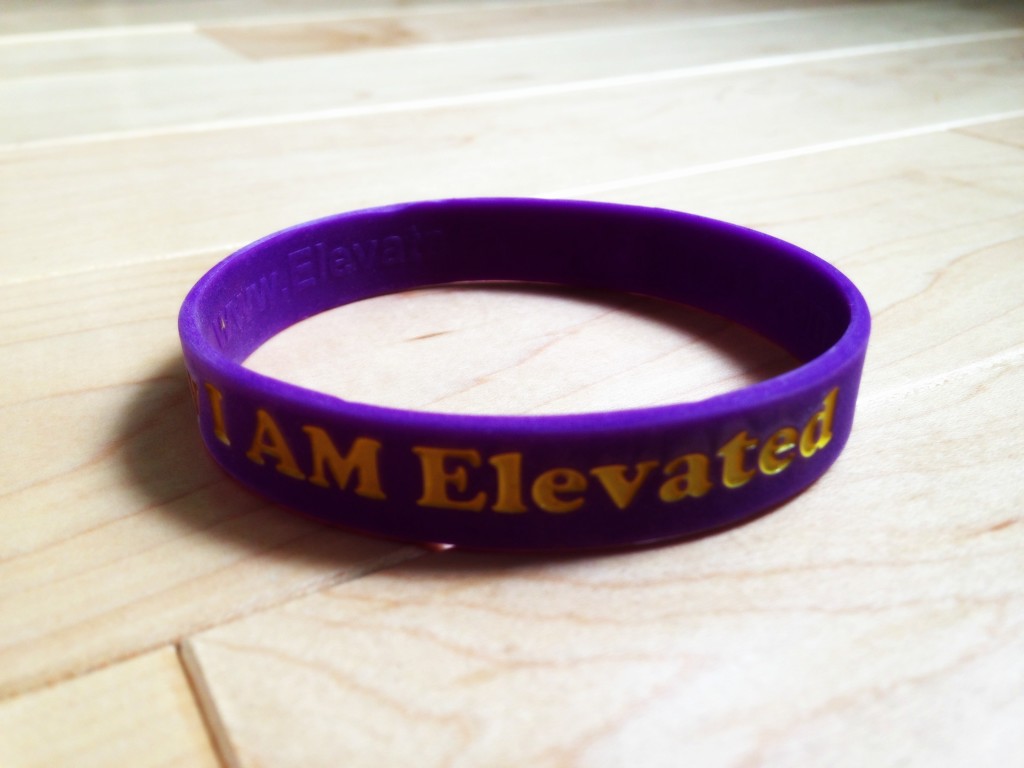 That was a nice touch!

* Disclaimer: I attended the class at Elevate Fitness for free, as part of my complimentary one-month membership to ClassPass. Learn more about the ClassPass program in San Francisco in my post about the service.

Do you prefer big group fitness classes or small private experiences? Have you done a workout recently that just wasn’t for you?