That’s right, I took a TRX class at the flagship TRX Training Center. It just so happens that the nation’s only official TRX Center is in the Russian Hill neighborhood of San Francisco and on my walk home from Equinox.

I booked a spot during the lunch-time hour last week to try out the “Circuit Challenge” class.

Although I had walked by the TRX Center many times, I’d never looked inside or went in, but I’ve always been intrigued by it. It was much bigger than I expected. There were two floors, including a ground-floor studio, where my class took place, and a huge second-floor studio. There were also locker rooms, restrooms, meeting rooms and displays of merchandise. Everything stuck with the yellow and black theme, and it was very unisex. It reminded me of what I would expect a gymnastics studio or Olympic training facility to look like. Clean, industrial and brightly colored. 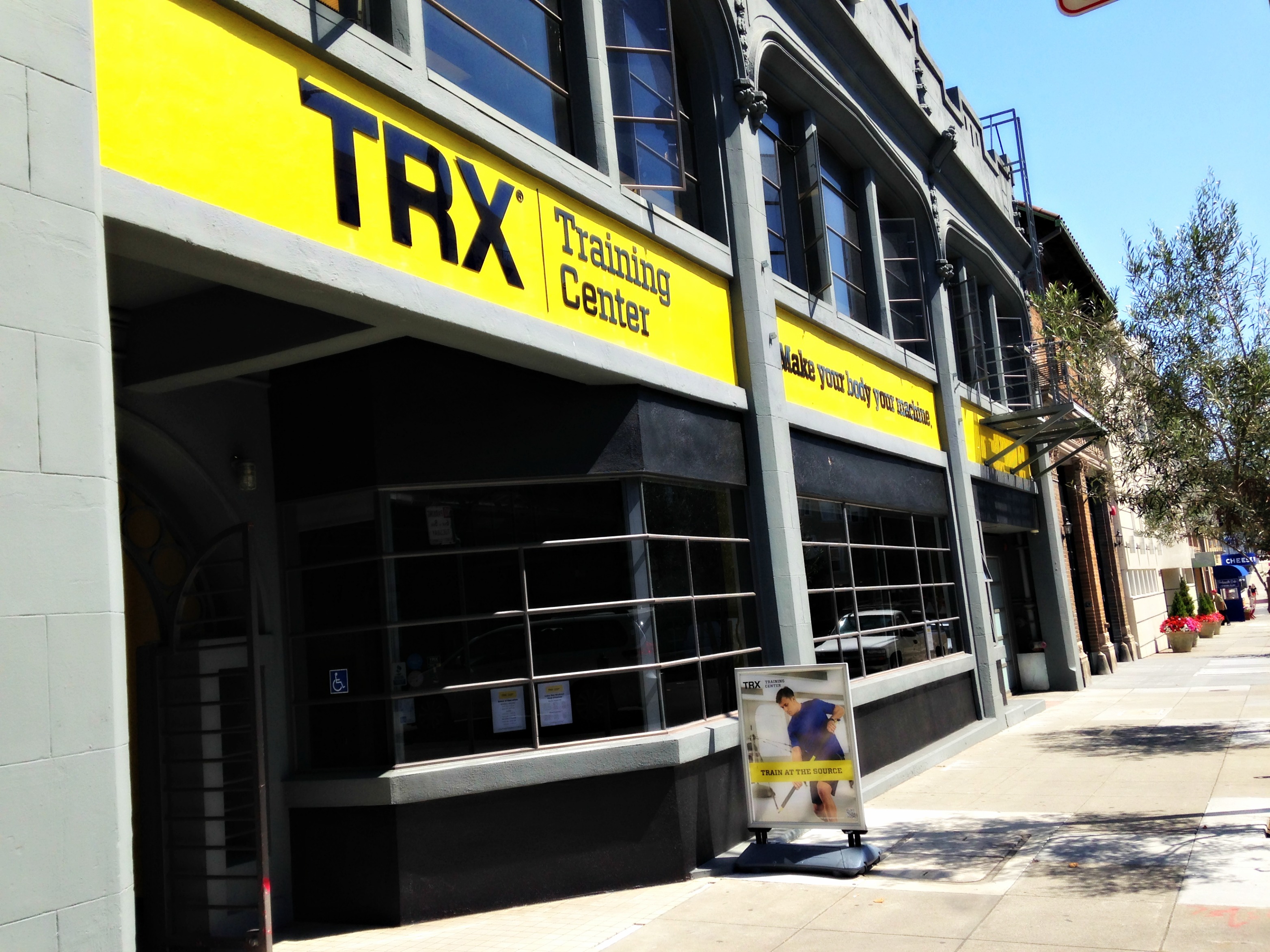 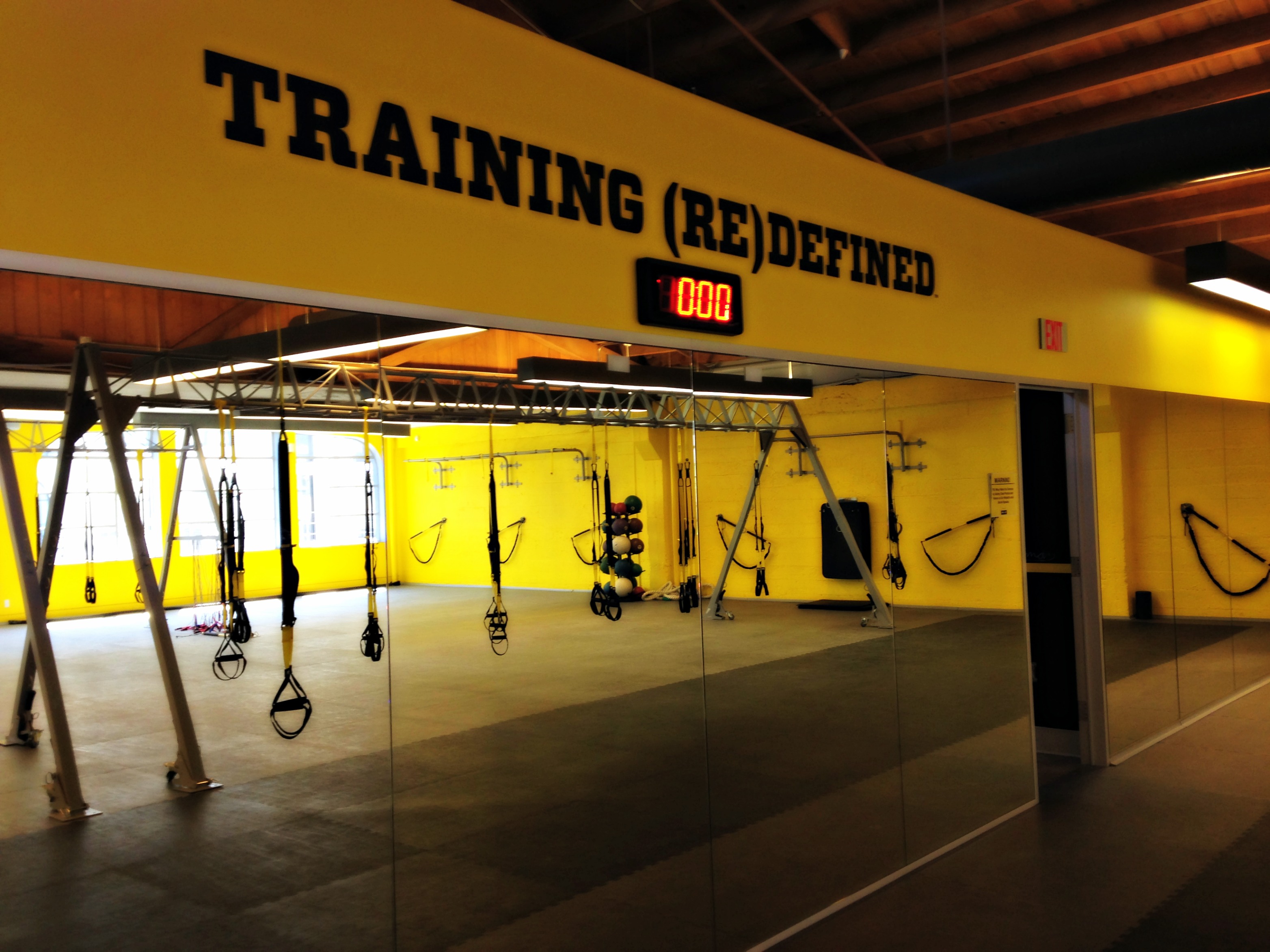 There was someone at the front desk checking people in, and he gave me a little tour of the facility, as well as took me into the group fitness room to demo how to work with the TRX straps. While I occasionally use TRX straps for moves with clients at work, I’ve not received official training on the apparatus. If you’re not familiar, TRX is a suspension system, which offers a world of resistance and cardio training moves, but you have to move the straps around a lot depending on what you’re doing. It all hangs from the ceiling with a very sturdy bolted set-up. 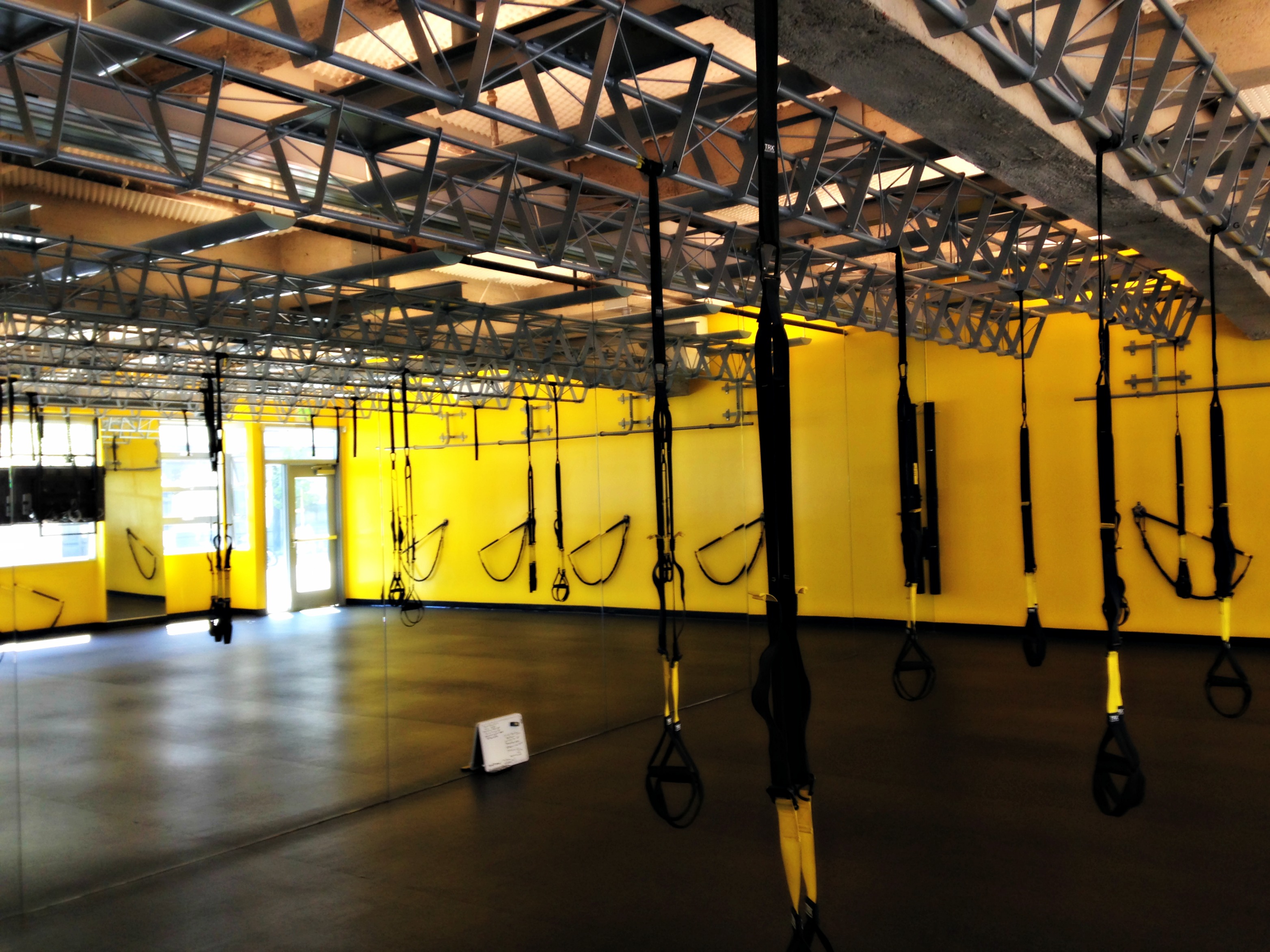 After I was all situated, I waited for the rest of the participants to fill in and we began. There were about 15 other people that day, many of whom seemed to be regulars. Mostly women, with one guy. Our instructor was Medwin, who looked to come from a personal training background. He welcomed us to class and told us the lay of the land. We would be doing a pyramid circuit pattern, which was written on a little whiteboard in the front of the room.

We started with a 10-minute warm-up using the TRX, including squats and lunges and push-ups and other low-intensity moves. Then, we went into the meat of class, which was a circuit of timed moves. We did squat jumps, burpees, single-leg squats, TRX push-ups, TRX chest presses, TRX pull-ups, agitator crunches, agitator squats, tricep extensions, TRX rows, planks with our feet in the TRX and we also got in some extra cardio by running. That’s right. During the circuit, Medwin told us to run out of the studio down the street to the end of the block. It was such a nice day, and we ran by people dining at little outdoor tables in front of cafes. While I’m not a running lover, these little jogs and sprints added a surprise element to class for me. It was totally unexpected for him order us to leave the room, and I loved that.

I really liked the set-up of this class. We did every move in the circuit, hit the top of the pyramid for a little burst of HIIT, then did every move in the circuit again in reverse order and for a little less time than the first. We moved the level of the TRX straps up and down for each move, which was a little challenging for me to get done in the time allotted since I was new. Occasionally, Medwin would hop over and help me out, which I really appreciated. We had our hands in the TRX straps, our feet in the straps and we used them for nearly every move. You work against your own body weight when using the TRX and that is a very safe and efficient way to build strength. It feels good, not scary.

The hardest moves were definitely the TRX handstand and the TRX single-leg burpees. Those moves were super advanced, and I struggled to find full range for each set. But I sure did put forth a valiant effort.

I broke a sweat and felt some fatigue at times. But it wasn’t terribly demanding.

How hard is a TRX class?

You can push yourself pretty hard in a class like this, because although he gave us time allotments for each exercise, we moved at our own pace. If you wanted to work in double time and rep out a ton per 30, 60 or 90-second block, you could have. While I think someone new to working out would find this particular class difficult, the TRX Center does offer more beginner-level classes, which could be more accommodating.

Medwin said there is another format of TRX class at the center focused solely on resistance and another focused on using other TRX-based equipment that doesn’t hang down from the ceiling. He was kind enough to chat with me after class and even pose for this sweaty, red-faced picture. 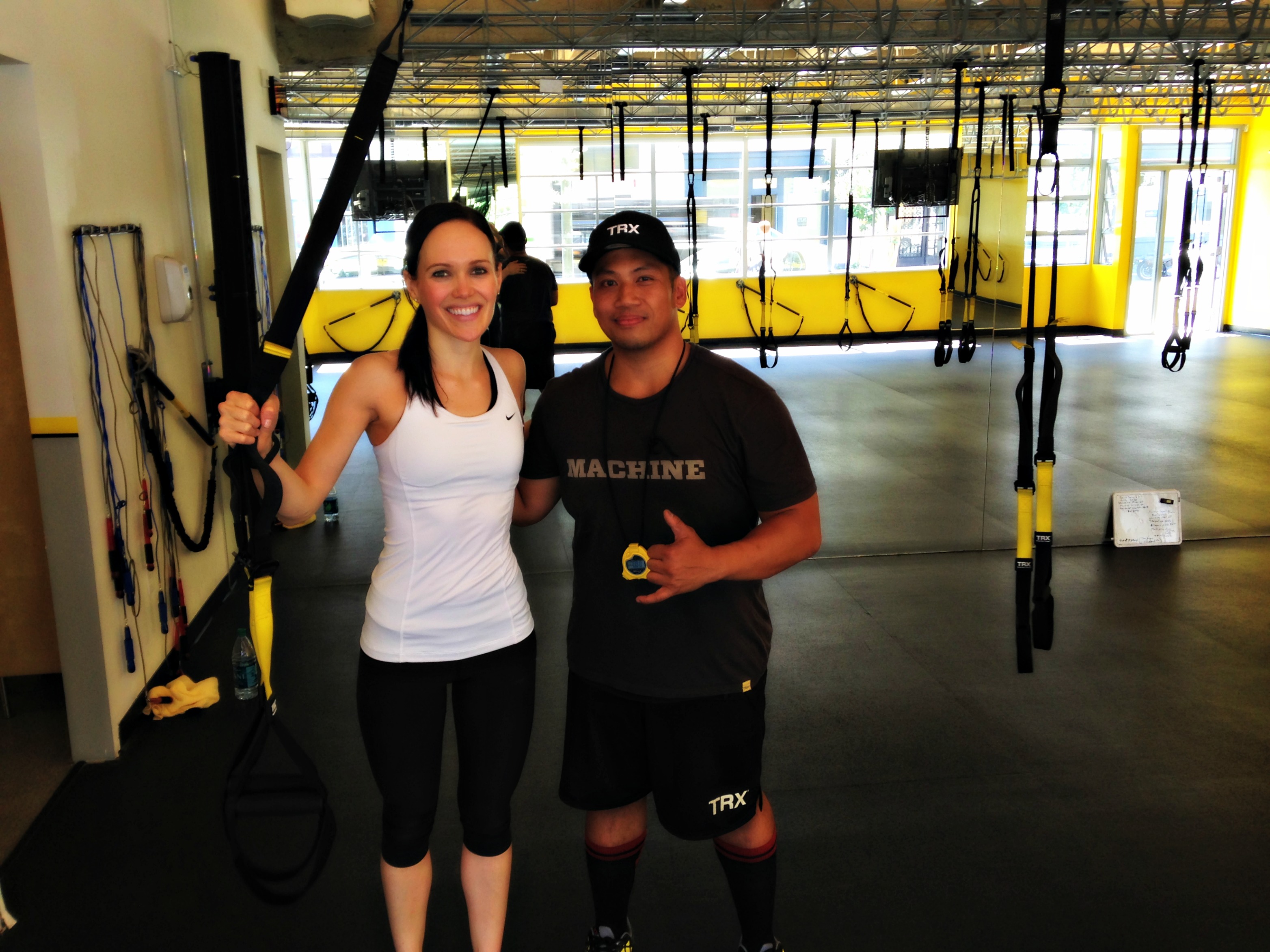 During class, Medwin’s role was mostly to call out the move, watch the clock and keep everyone on track with the countdowns. He expertly demoed each move one time, then walked around the room counting. I didn’t see him offer individual corrections to anyone, which would have been helpful for me personally. But because this was a bootcamp-style class in circuits, it makes sense that he wouldn’t really take the hands-on approach I tend to look for from instructors in other classes. Overall, he was clear with his set-up and instructions and offered a good selection of music to take us through the class.

I would definitely like to try more classes at TRX. Not only did I feel like I got a pretty decent cardio and strength workout in 55 minutes, but I also like the way the TRX requires so much balance and full-body strength for every move. It was challenging and lengthening in a very good way.

By the way, there was definitely a step-and-repeat on the second floor of the studio, which must be used for events and guest appearances. How fun. What a great marketing tool to have TRX participants go up and take pictures in front of there after class and share them. I wish I had! 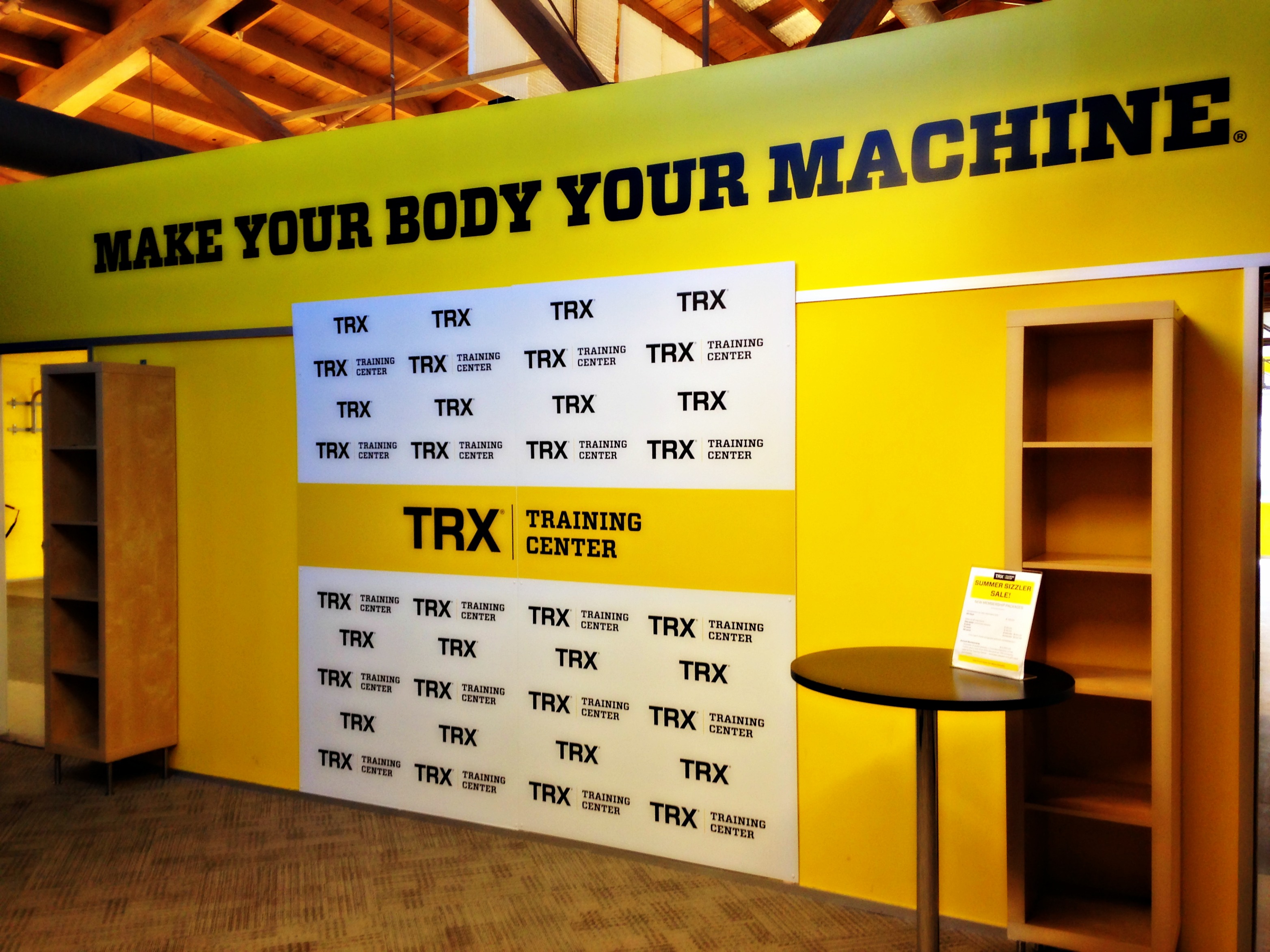 * Disclaimer: I attended the class at the TRX Training Center for free, as part of my complimentary one-month membership to ClassPass. Learn more about the ClassPass program in San Francisco in my post about the service.

Have you ever worked with TRX? Do you like bootcamp-style classes? What’s favorite way to fit in cardio each week?