On Thursday night, Dave and I attended Live at the Landmark, a concert series produced and sponsored by Jack Daniel’s, the whiskey brand.

The concerts have been taking place in major cities across the nation in historical landmarks like the Statue of Liberty in NYC, the Playboy Mansion in Los Angeles and The Old U.S. Mint in New Orleans, to name a few. Ours was held inside San Francisco City Hall, an incredibly gorgeous building both inside and out.

The concerts are not open to the public. And from what I know, all the tickets were given away via a contest. We scored ours through Dave’s connections at work. 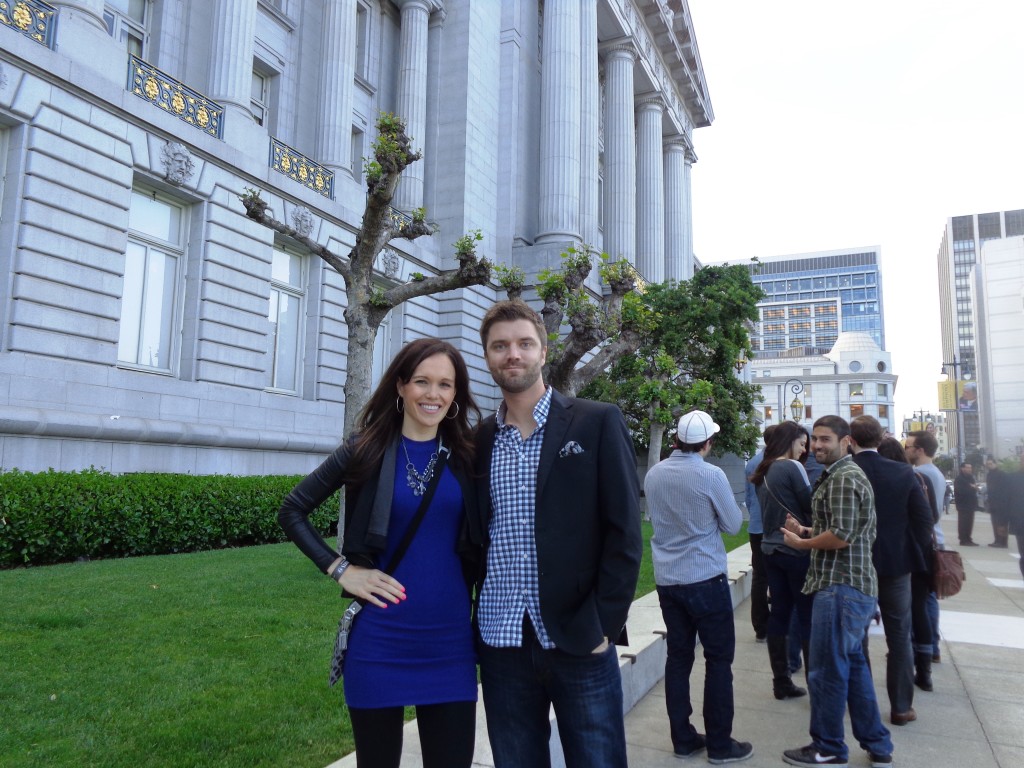 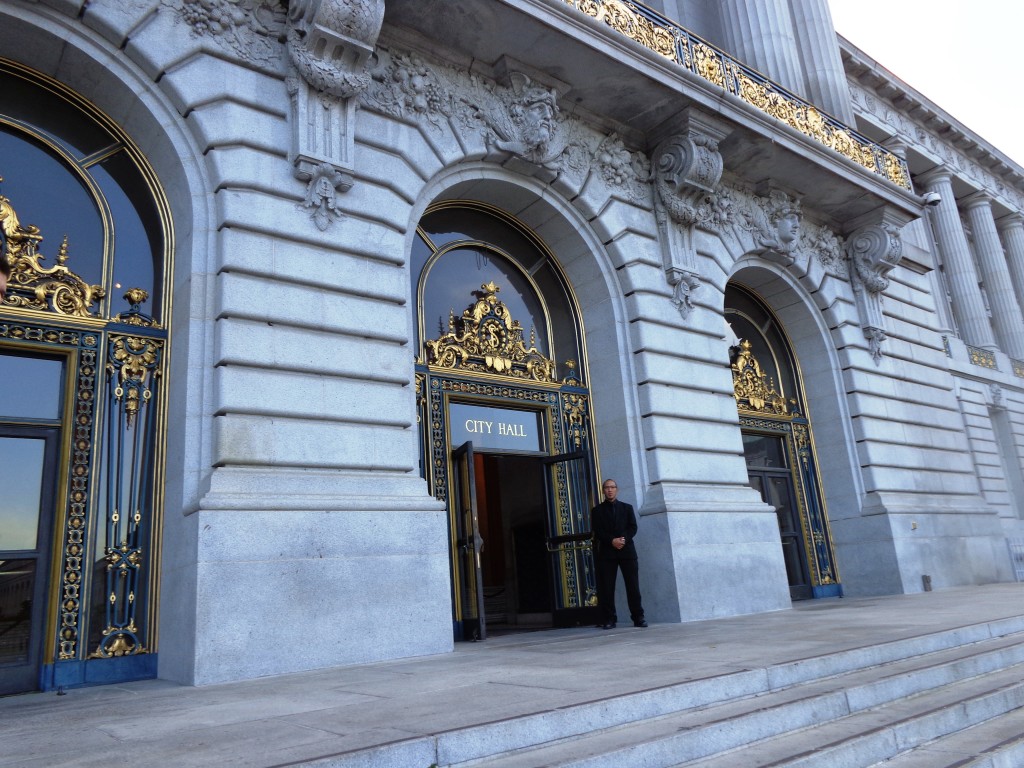 After dinner at home, in which we ate my world’s easiest healthy fish dish, we arrived to City Hall via an Uber just after 7 p.m., waited in the short line, then were given bracelets and drink tickets. Once inside, we met with one of Dave’s contacts from Jack Daniel’s and got VIP lanyards and a few more free drink tickets. Score.

The VIP lanyards gave us access to a sectioned-off area upstairs, where we could get drinks and hang out behind the velvet ropes. So we went straight there for a beverage.

Of course, the bar mostly offered Jack Daniel’s products. Dave likes whiskey, so he enjoyed a few varieties. Because I do not do whiskey, I stuck to the only wine available, which was chardonnay. Fine with me. 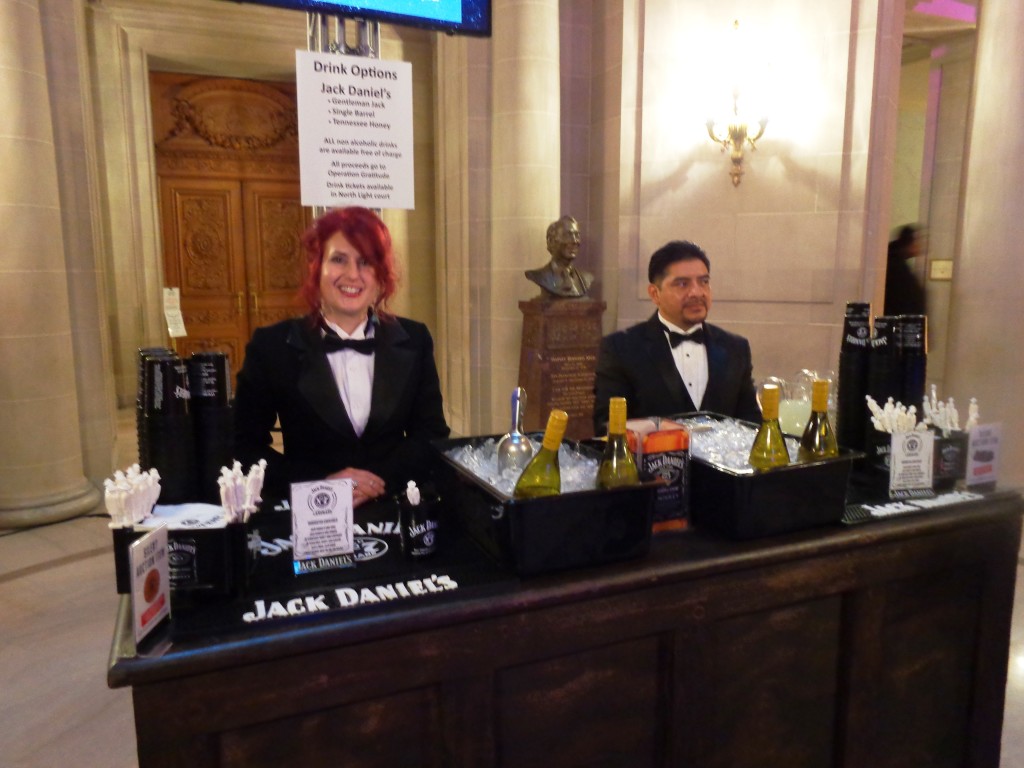 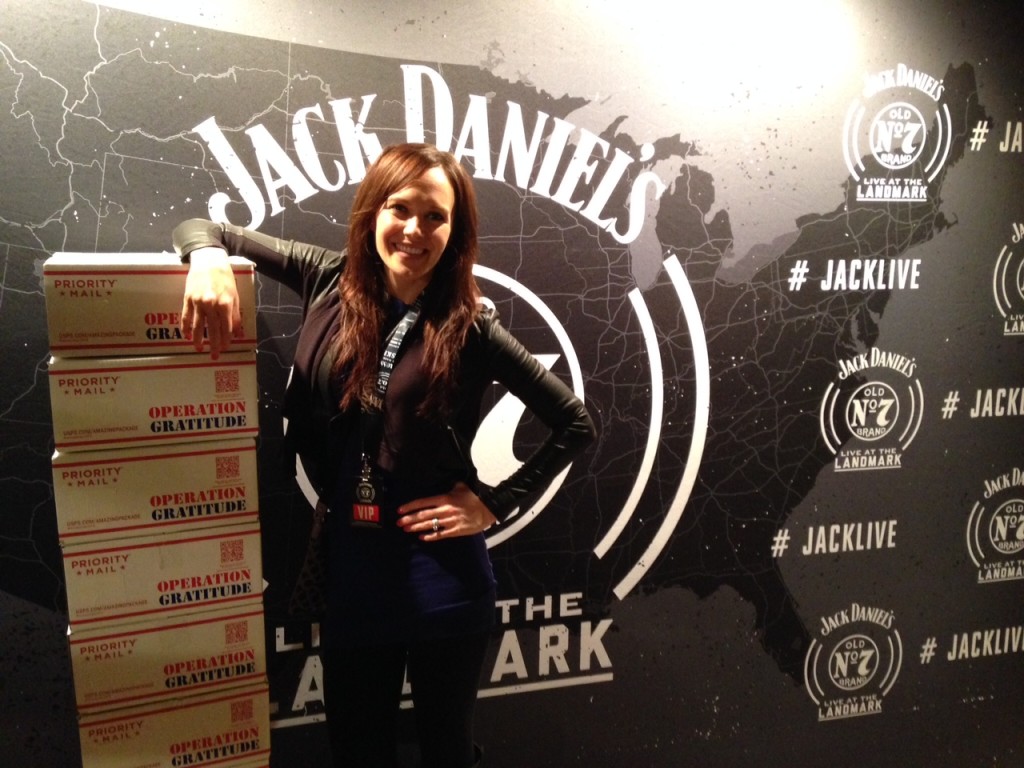 Live at the Landmark bands

The opening act was a singer named Conway. She and her band went on around 8 p.m. They were good, but the acoustics in City Hall leave something to be desired. We stayed just outside the VIP area on some steps overlooking the main rotunda and had a hard time understanding the lead singer because of the garbled sound. But boy did she have some pizzazz onstage. She was sort of like a little Gwen Stefani, in the way she jumped around and kicked her legs. 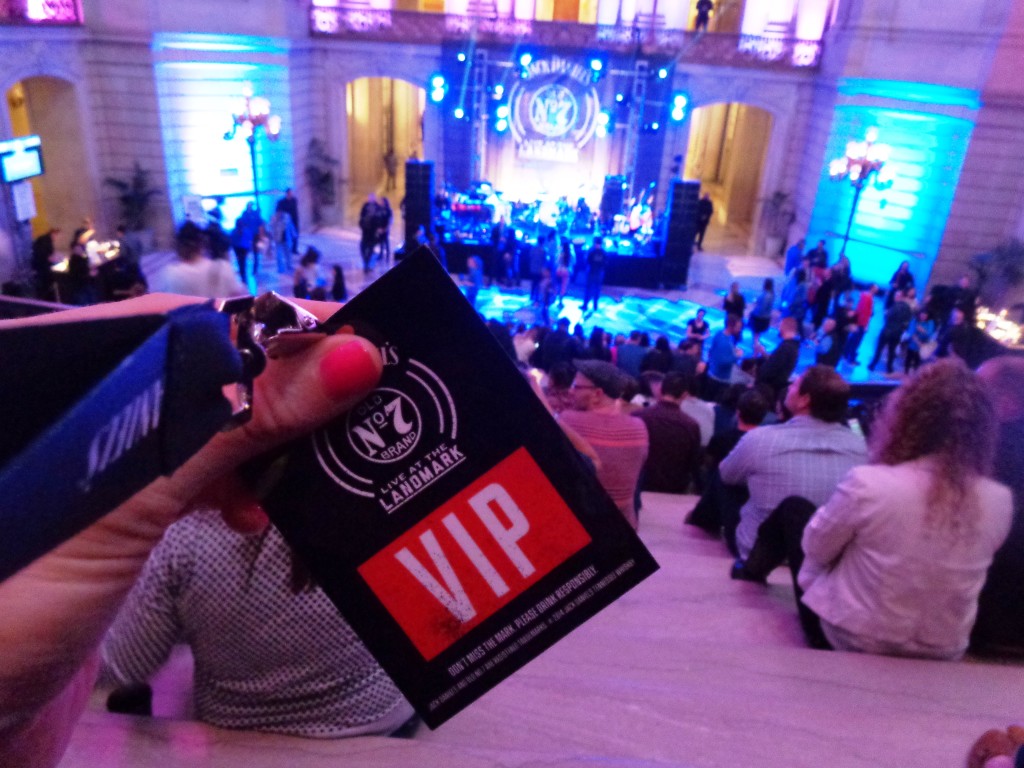 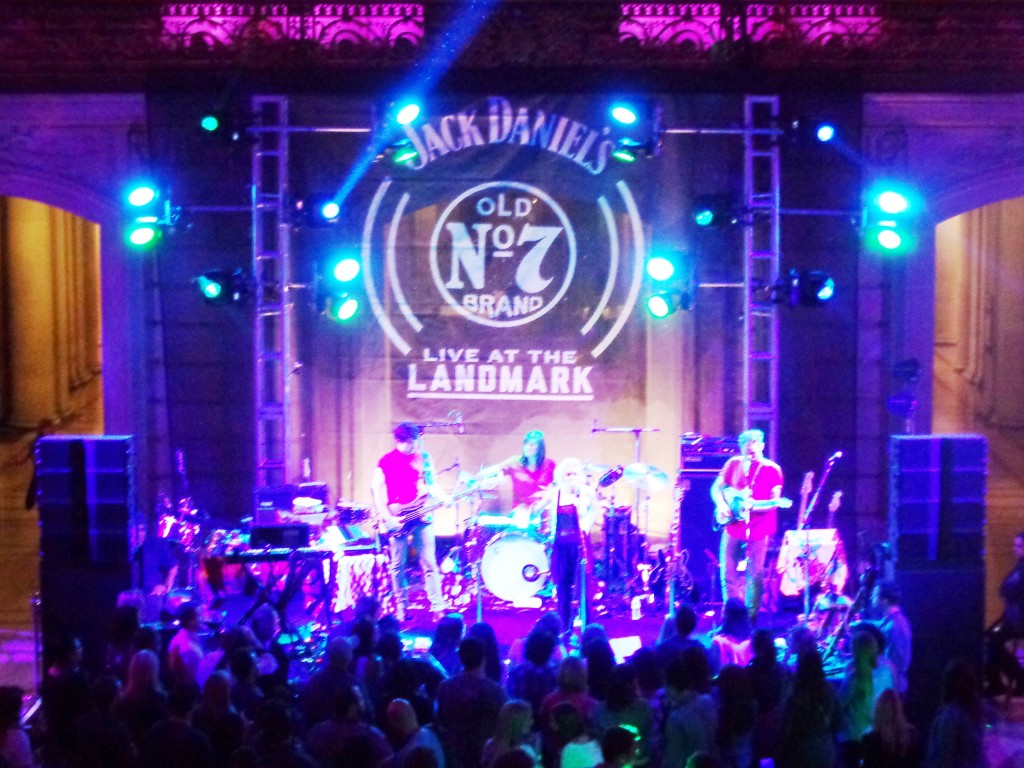 The headliner band, St. Lucia, went on around 9 p.m. They were excellent. Sort of like an 80s band. In fact, the lead singer had a fan positioned on him that blew his hair back while he sang. He also had some serious stage presence.

St. Lucia had no less than four keyboards on the stage and their music was like an electronic-rock-pop combination, which was super enjoyable. For some reason, the music and sound quality was much better with St. Lucia. Dave has downloaded a few songs from St. Lucia since the concert, and we’re now definitely new fans of the band. 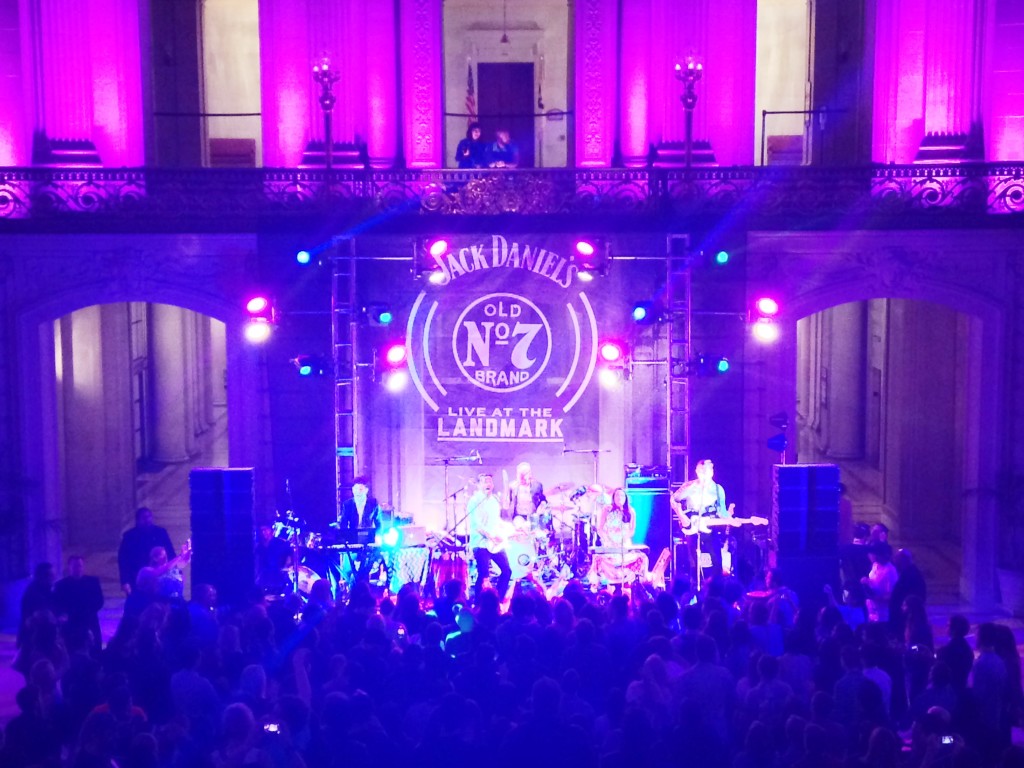 Because we wanted to make sure we really got a taste of the sound, we moved down to catch a few minutes on the floor as well. It was general admission for everyone, and we had no problem getting up close. 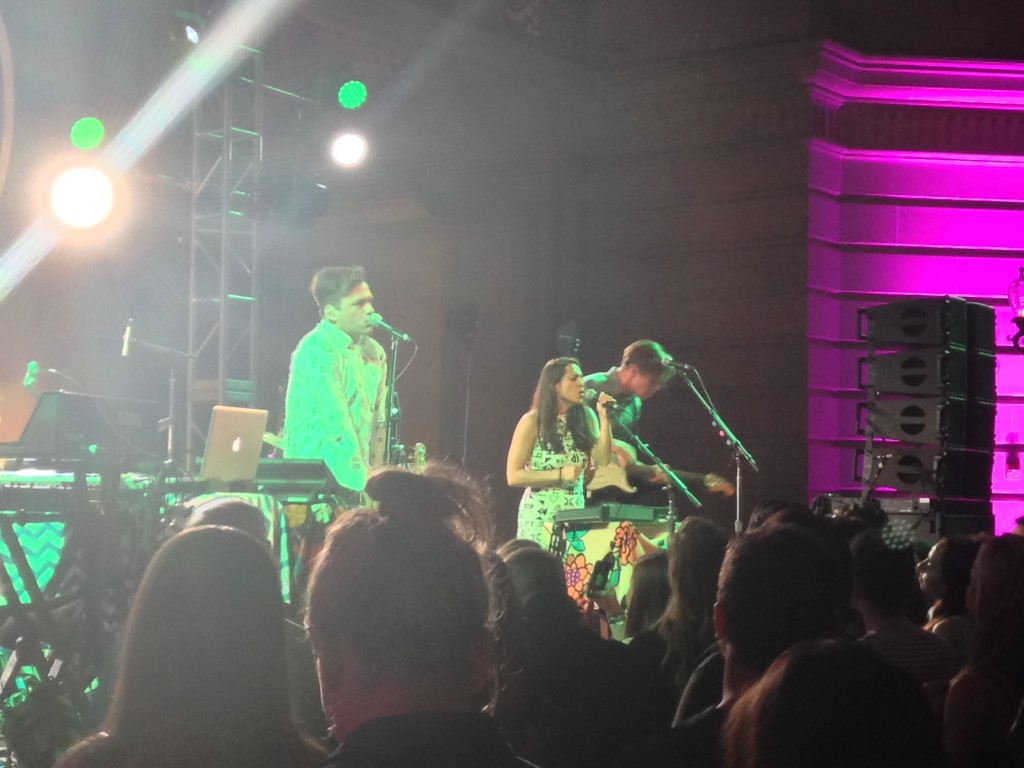 While at Live at the Landmark, we chatted with a few people that Dave knew here and there, but mostly sat on the City Hall steps inside the rotunda and took in the live music.

I say it all the time, but the people watching in this City is phenomenal. This was a young and attractive crowd. There were some great outfits, great hair, and we really got a kick out of watching everyone in attendance. 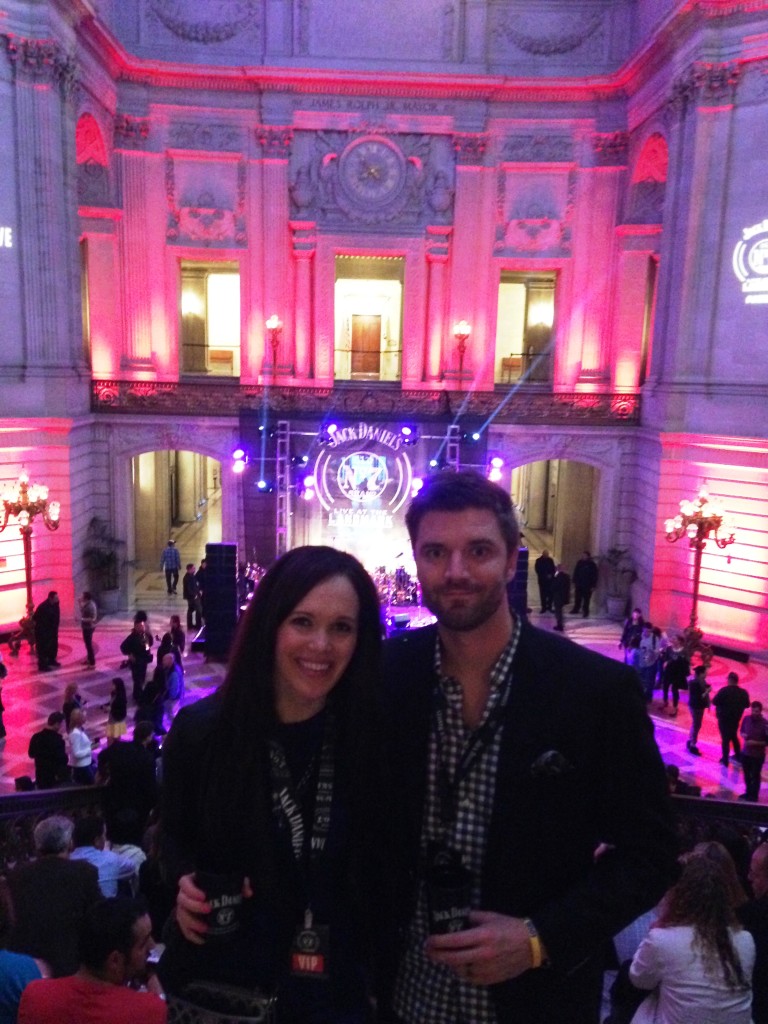 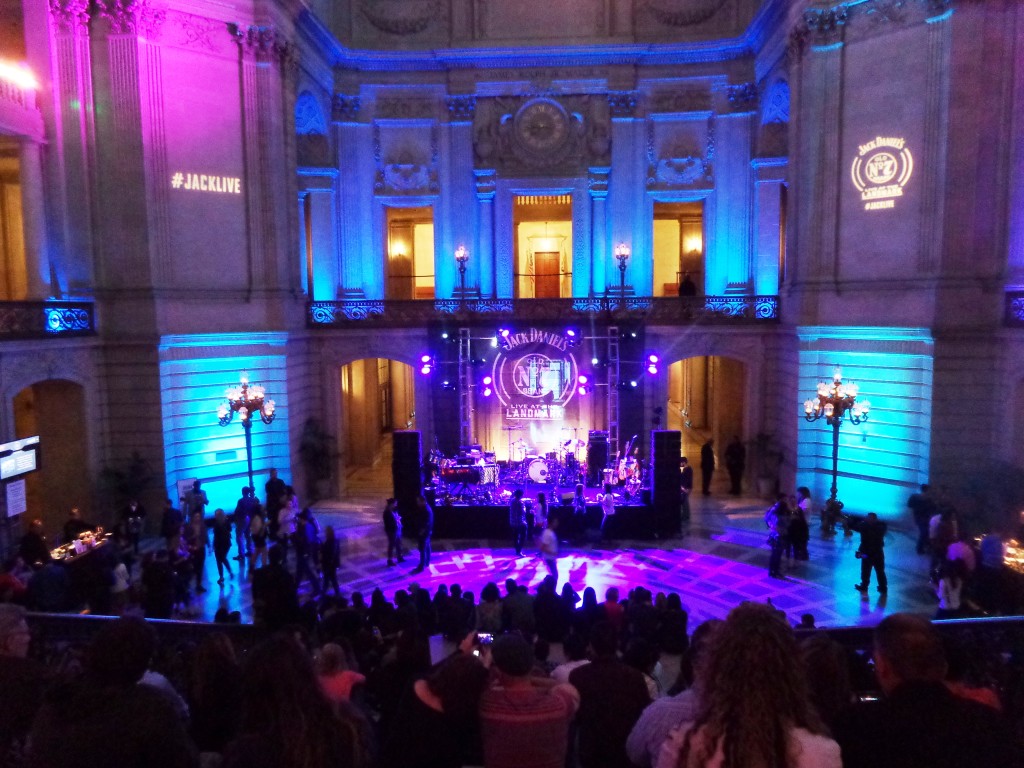 Although I hadn’t heard of either musical act, nor did I know their songs, I liked what I saw. Truthfully, I’ve never been to a concert I didn’t like. Something about live music just makes me happy, and getting to experience it inside a building like City Hall made it that much more of an event.

I’d file Live in the Landmark into the category of cool things we get to do living in a place like San Francisco, which attracts this type of fun.

Hope you have a great one!

What’s your favorite kind of music? Do you have tickets to any concerts in the near future?