It was an eventful weekend, so let’s just discuss Saturday to start.

Early Saturday afternoon, after I showered up from teaching a sweaty BODYATTACK class, Dave and I joined some of his coworkers at the Golden Gate Tap Room to watch the Golden State Warriors in the first NBA playoff game against the Los Angeles Clippers.

There were several groups of Warriors fans in attendance other than us, as well as some annoying Clippers fans immediately to our right. 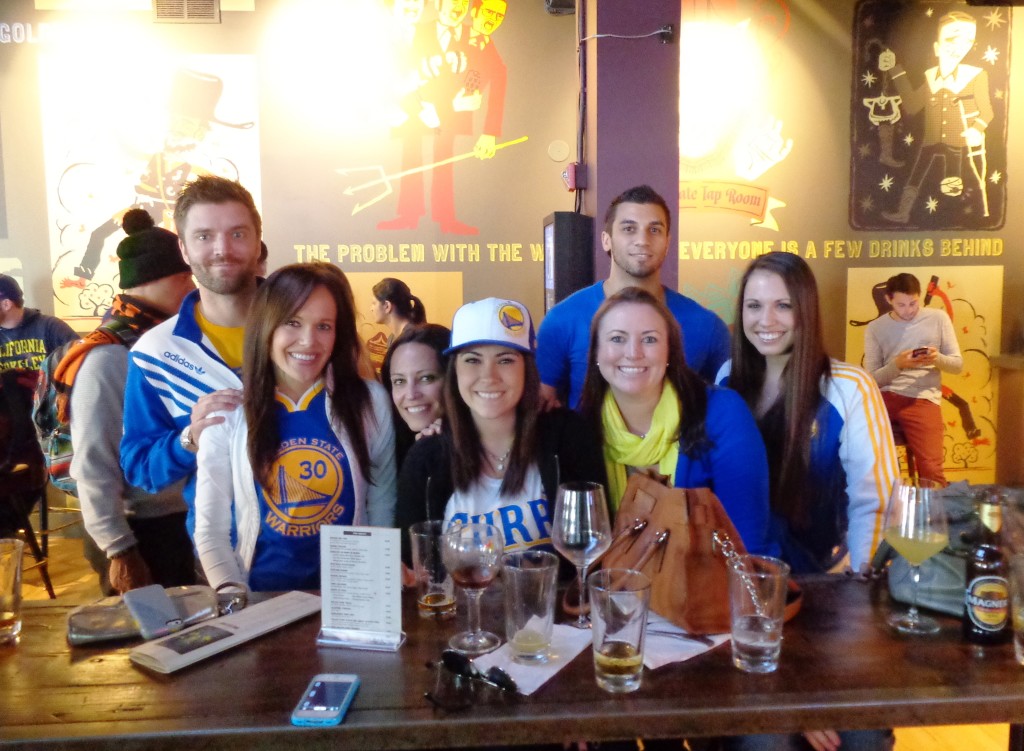 It was a close game, which was action packed up until the very end. A great win for the “Dubs” as they are nicknamed, which put Dave and his coworkers in a good mood.

After the win, we went home to relax before deciding on our Saturday evening activities. It’s been a while since we’ve had a free Saturday, so we knew we wanted to try a new place for dinner, but hadn’t made any reservations.

Ala Romana Trattoria in Nob Hill

About 7:30 p.m. we headed out on foot in our neighborhood. First we tried to go to a newish spot called Mason Pacific, but there was even a wait to sit at the bar, which was an hour-and-a-half. We put our name down to be texted once seats opened up (the dining room was totally full, so there was no chance there) and then left.

Instead, we walked a couple of blocks over and stumbled upon a brand new restaurant called Ala Romana, a Trattoria and Enoteca. It was one of those super small, cute corner restaurants that was dark and intimate inside, just how I like it.

After looking at the menu posted on the window, which is customary to do in San Francisco, we decided to go inside and inquire about the wait. The hostess said it would be about 30 minutes for a table, and as we were deciding the manager came up to us and said he would give us some complimentary champagne while we waited in the back. There isn’t an actual bar in Ala Romana, but a beverage station that had just enough space for the two of us to stand, so we were sold.

While enjoying the champagne, we chatted with the manager about the restaurant. He gave us tips on what to order, mentioning the catch of the day was the arctic char and it had just been delivered fresh. He also said that although the restaurant is very new, they have been quite busy and have amazing food. Strangely, he said he knows the service is not that great. We weren’t sure if he was joking about that or not.

Nonetheless, our table was ready in almost 10 minutes, and we were seated before even getting halfway through our complimentary champagne.

Ala Romana is the type of San Francisco dining that I love. There were less than a dozen tables, all in one small dining room. After some research, I found it is actually a sister restaurant to Allegro Romano, a place we haven’t been before but is said to be good. 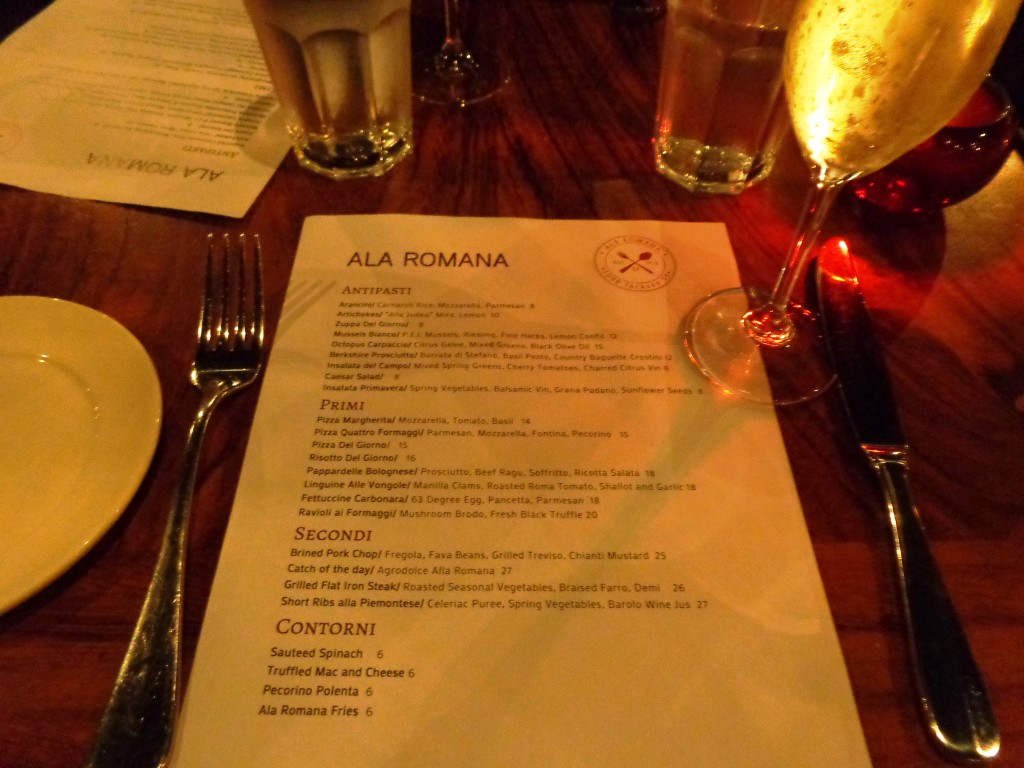 After perusing the menu, we started with a bottle of Jovino Pinot Noir. 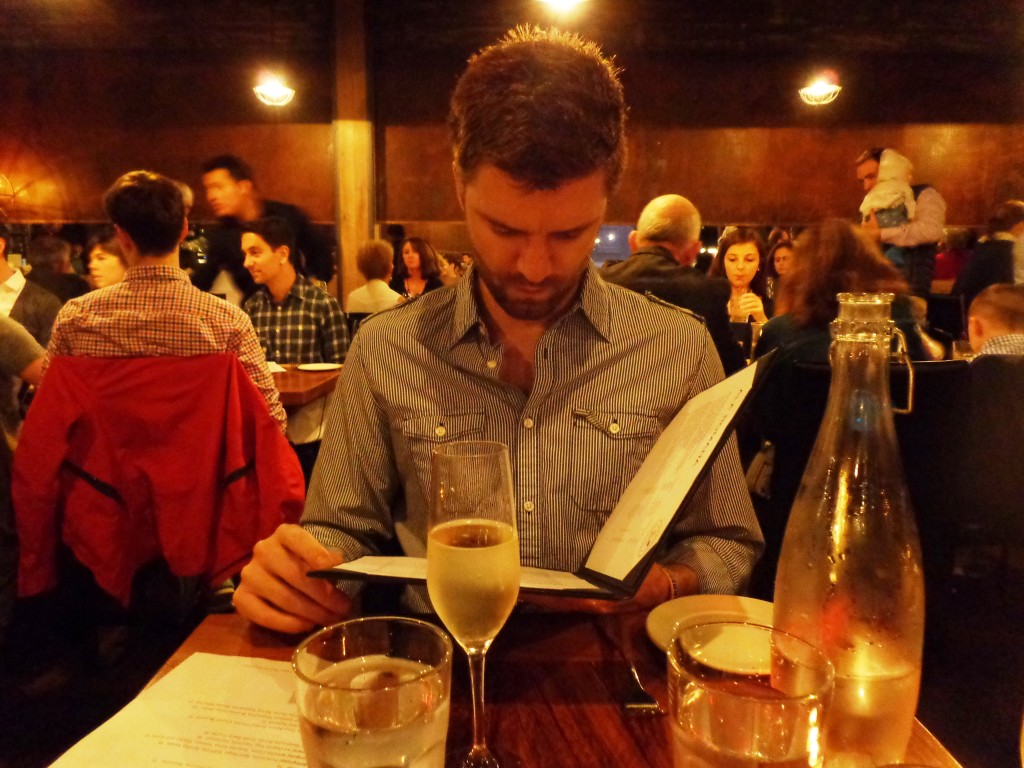 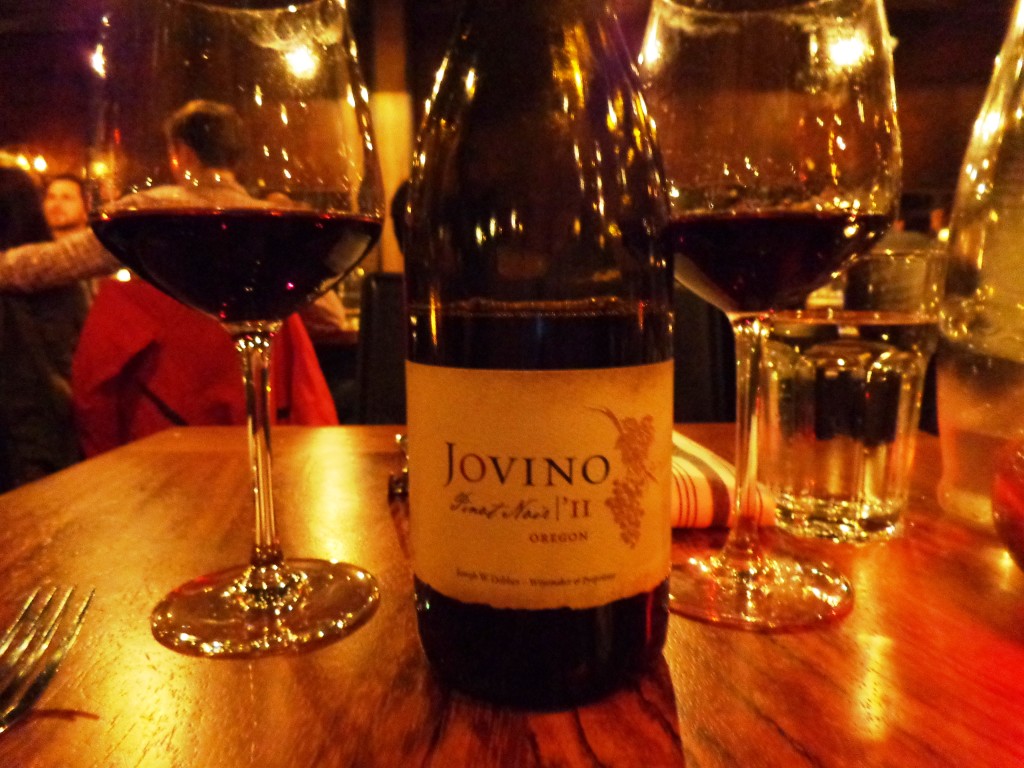 Then we ordered the artichoke for an appetizer, which was lightly fried and flavored with mint and lemon. The outside parts were a little greasy for my liking, but the interior heart of the artichoke was delicious. When the waitress said it was lightly fried, I cringed a bit, but agreed to move forward. All in all, I’m glad we tried it, but I wouldn’t order it again. 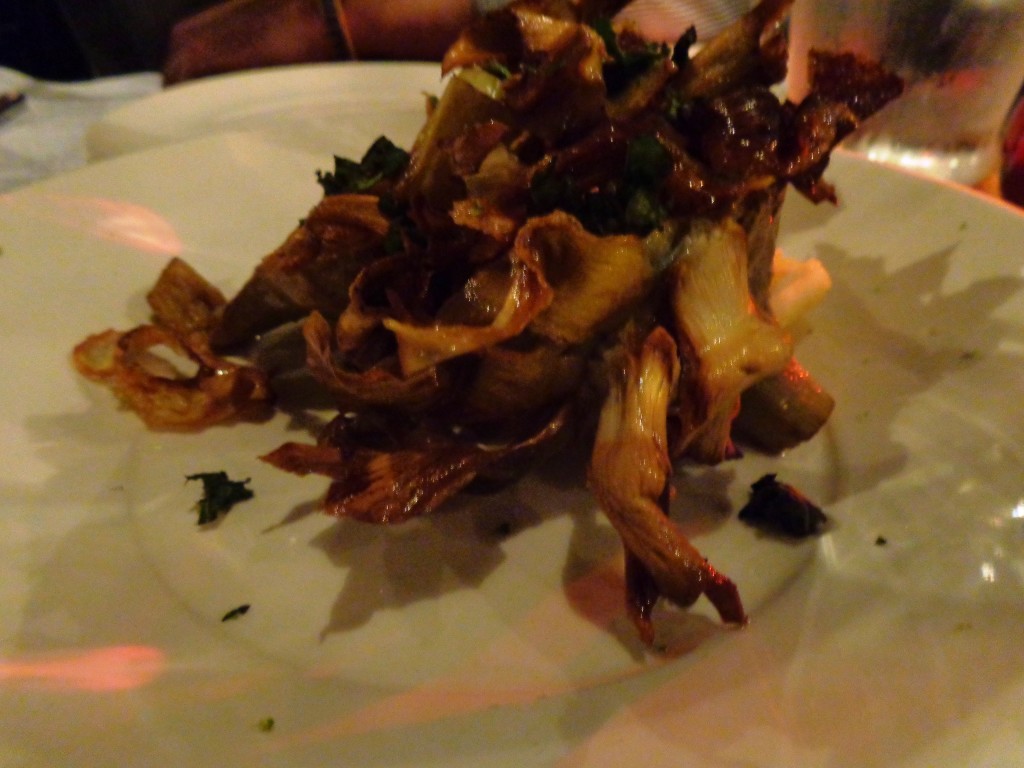 Because the manager had talked up the arctic char, I had no problem choosing that as my entree. However, this ended up being an order filled with drama.

Our waitress didn’t have great English, so when I asked for the catch of the day she said it was swordfish. I said, I want the arctic char, and she told me I meant swordfish. I didn’t fixate on it, and assumed I would get the same delicious fish dish I saw enjoyed by my fellow patrons on both sides. (It was a small menu, and only one fish dish was offered, so it’s not crazy that I would get what I saw at other tables.) However, when my dish was delivered, it was just a white piece of swordfish. After I took one bite of the tasteless fish, I called over the waitress to inquire. She said the people eating the arctic char had reservations, and because we were a walk-in, there wasn’t enough arctic char for me. For real? I was NOT happy about that.

Of course, I finished nearly every bite of this sub-par plate, but that’s only because that’s what my Mom taught me to do. 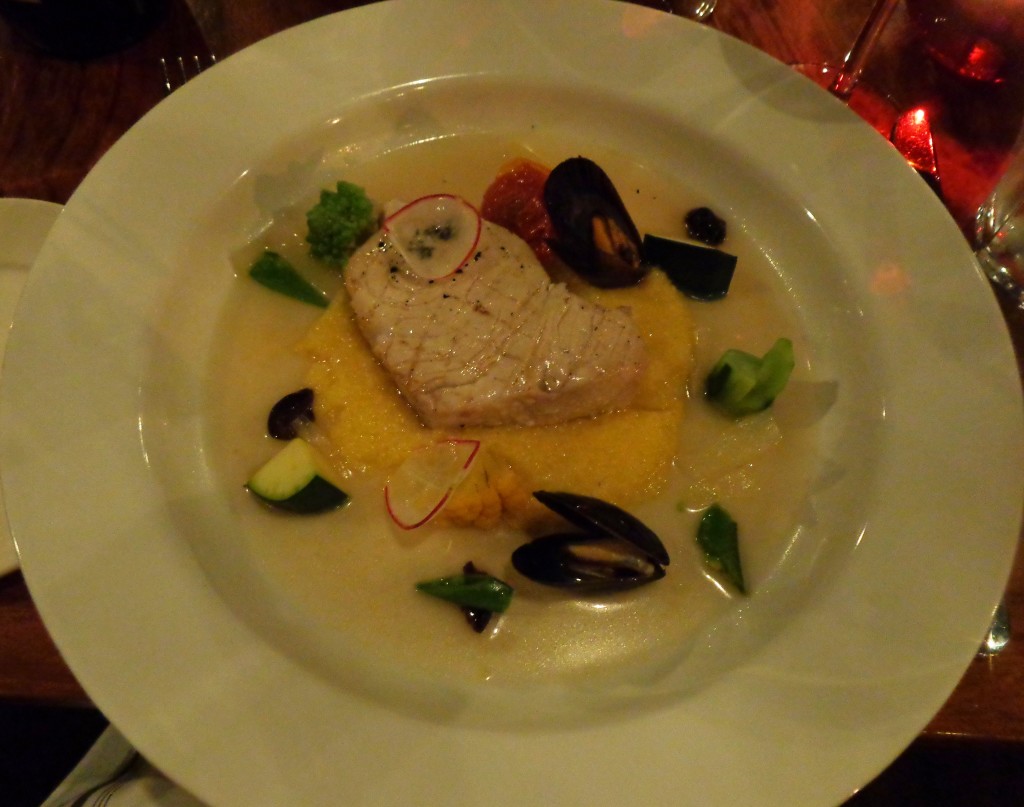 Dave also ordered the manager’s recommendation, which was the short ribs. That dish remains un-pictured, and Dave moderately enjoyed it. I tried it too and felt it was light years better than my white piece of rubber, but Dave didn’t think it was moist enough.

The thing is, we are not super critical of our food, and usually rave about everything we eat in San Francisco, so this was a strange occurrence for us. Bad food? Ugh.

We also had some tasteless, cold, white bread, delivered nearly halfway through our entrees by the manager. Thanks.

I kept a smile on my face and didn’t show my displeasure. But the service really did leave something to be desired.

And it just kept getting better.

Because Ala Romana is so small, the tables are in close proximity. Rather than standing and serving from the empty side of the table next to us to talk to the patrons, the waiter serving our neighbors stood directly next to our table every time he visited. His rear end was nearly on our food, brushing up against our elbows. In fact, Dave and I scooted ourselves and our table over away from him. He just kept doing it though. It was like he was totally new to the service industry and had no regard for his surroundings.

Then, it got even better.

Our waitress knocked over our bottle of red wine. It spilled allover the table and the floor. Luckily, it didn’t get on either of us. This little error, in addition to the fish issue and the butt-on-our-food mentioned above, proved to us that the manager was not kidding when he said the service wasn’t so good.

There was a little light at the end though. Our waitress must have felt some remorse, because she returned with a half-full bottle of red wine for us, replacing what she spilled. So we ended up getting an extra two glasses for free.

Then, she brought us a complimentary dessert. 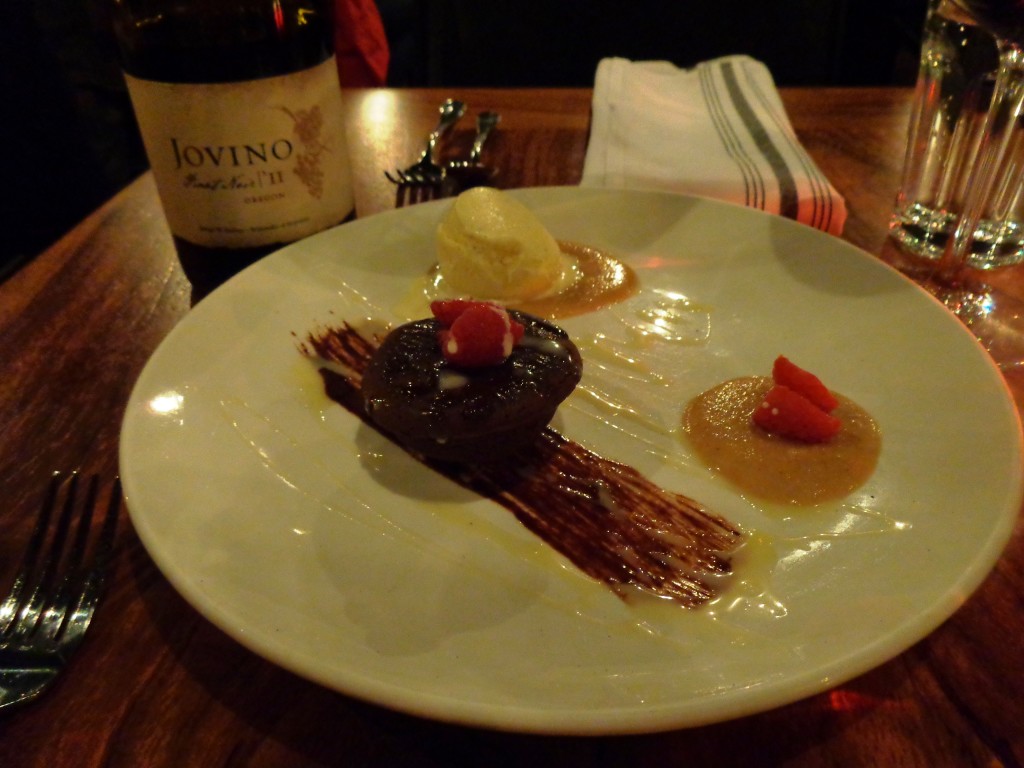 The dessert was awesome and by far the best thing we consumed at Ala Romana. I typically prefer something a little larger, but this small chocolate thing was so decadent, as was the almond butter and ice cream that accompanied it, that I was nearly satisfied.

Because of the free items, I’ll hold off from leaving a bad review on Yelp. And you know us San Francisco foodies rely heavily on Yelp reviews and pictures, so that’s a big deal.

It goes without saying we won’t be returning to Ala Romana. It was restaurant number 140 on our ongoing list of places we’ve dined in the Bay, and it falls near the bottom on the rankings for food and service.

Yet, because of the laughter and events that unfolded, it will ultimately be remembered quite vividly.

Have you been to any good restaurants lately?