It’s time for another “What I Ate Wednesday” post, and this time I’m sharing my eats and drinks from Saturday.

Standard. Overnight oats, topped with a banana and cinnamon. Green tea, sweetened with almond milk and stevia. True story: I’ve been eating some version of overnight oats for breakfast most days of the week for years. I do change it up from time-to-time and may be looking to do that soon. But it’s so easy, so filling and so healthy, which makes it hard to walk away from. 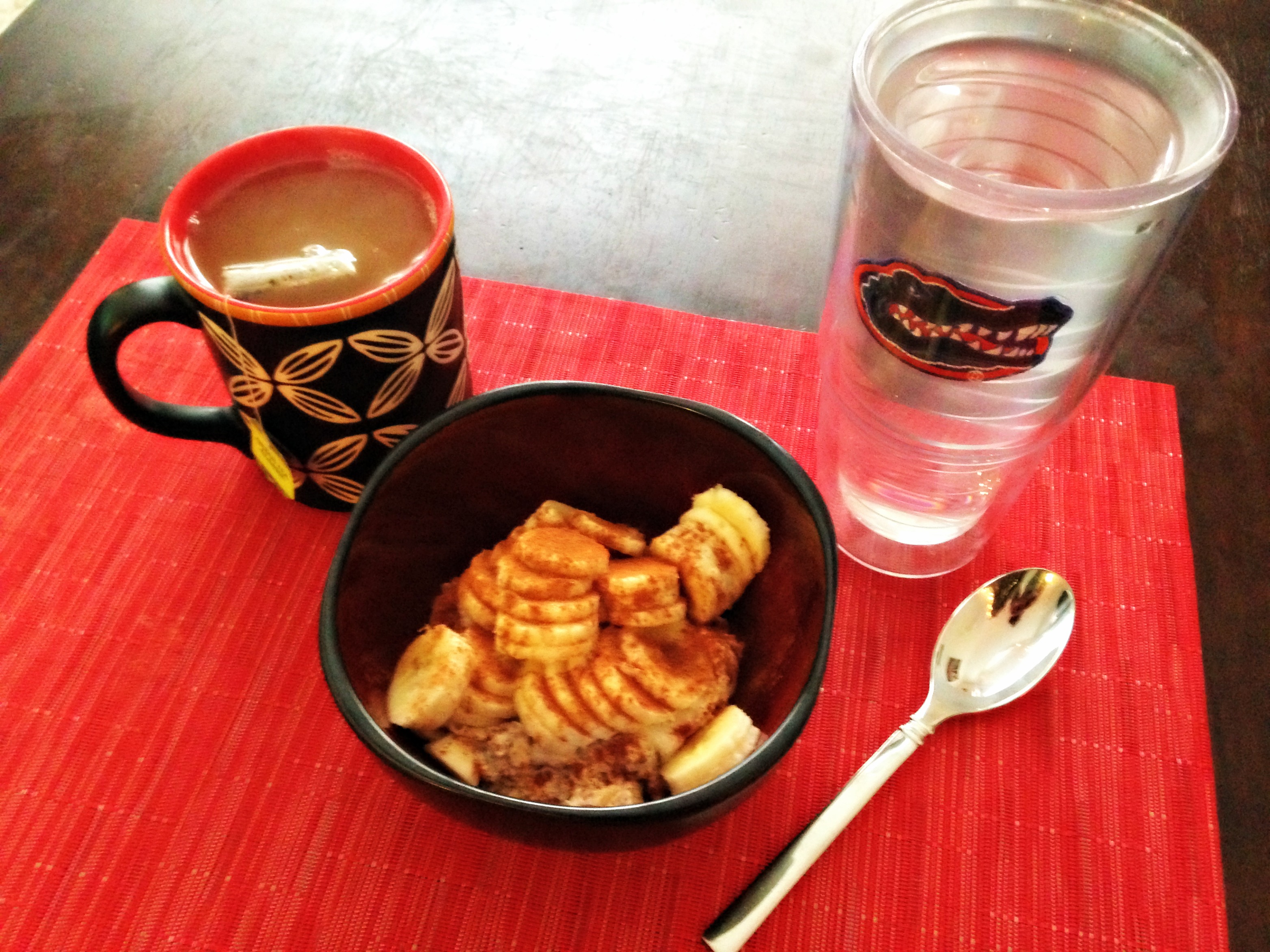 I had two Cytomax Energy Drops while doing some last minute preparations before teaching the new BODYATTACK 85 release. I never buy or eat these types of things, but received this bag as a little prize at my BODYATTACK advanced instructor training several weeks ago and have been nibbling a few here and there before teaching. I really can’t tell if they do anything at all, but they’re pretty tasty. And how about those marked up choreography notes? You like? 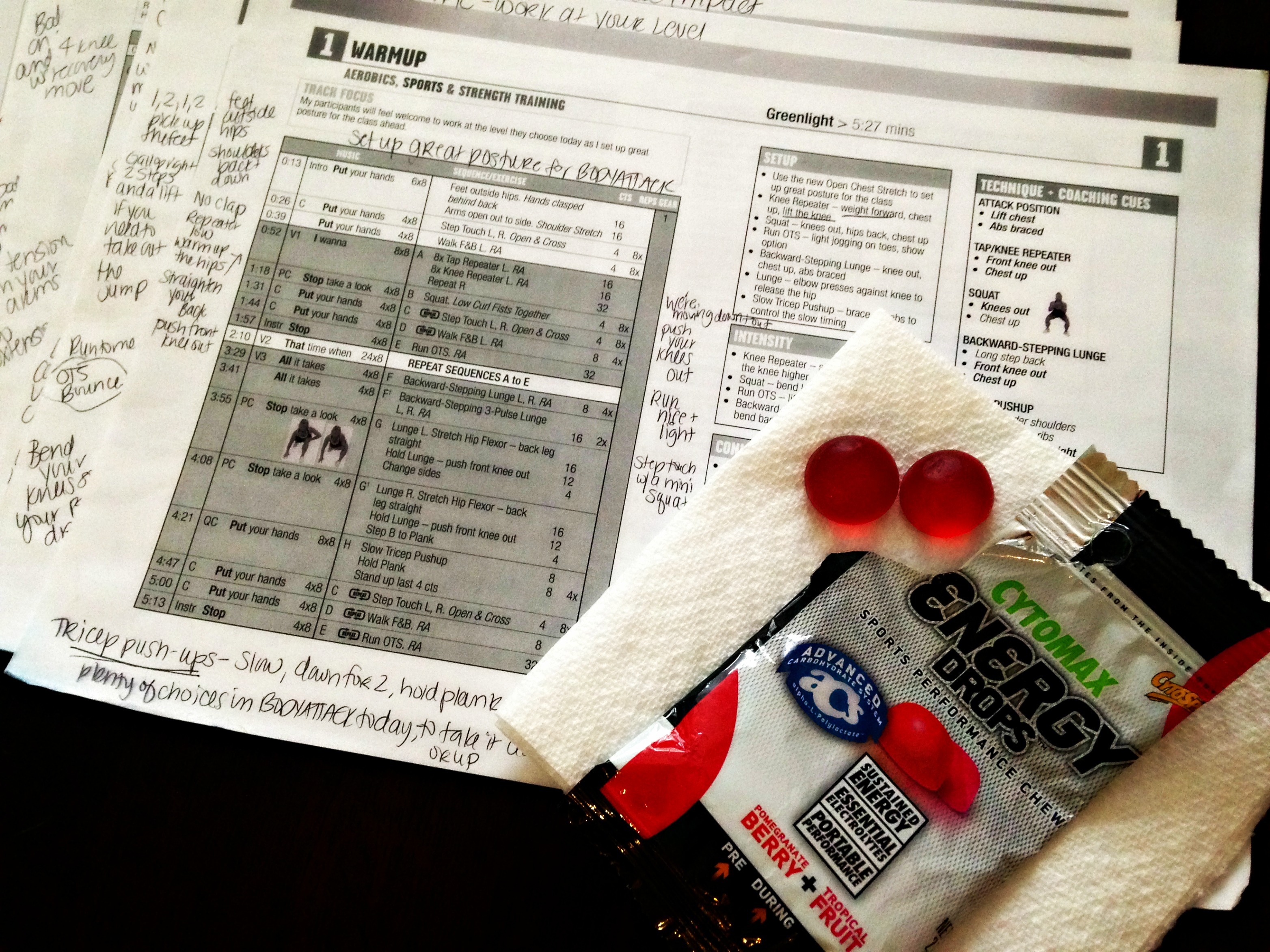 The amount of sweating that I do when teaching a one-hour BODYATTACK class is completely amazing. It puddles. It soaks through my shirt. Because of that, I have to work very seriously to rehydrate all day on Saturday after teaching. As soon as class is done, I always finish a bottle of water and a protein shake. After class on Saturday, I enjoyed a shake made with Muscle Milk Light vanilla protein powder. 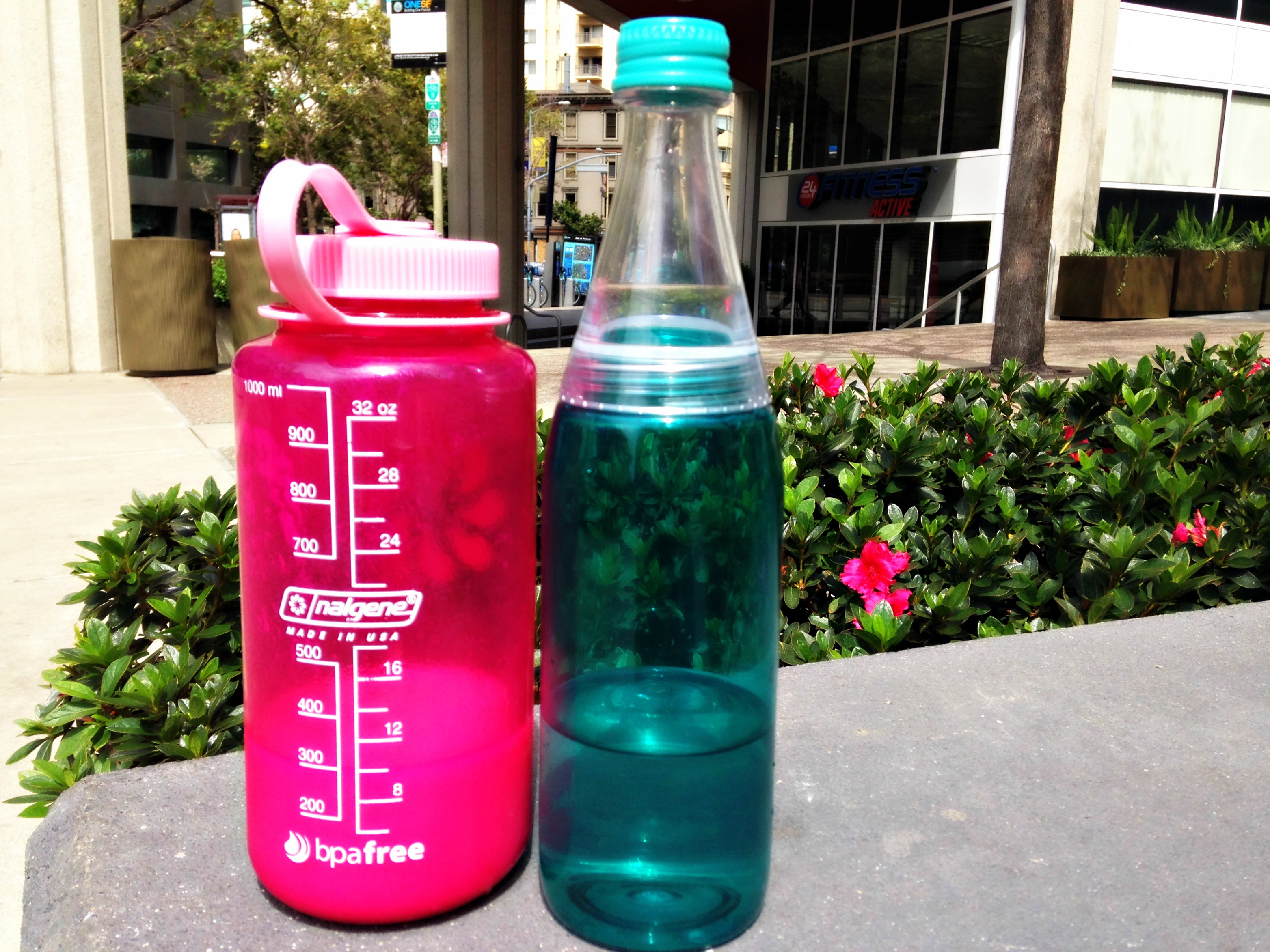 Yet, my thirst continued. I was still completely thirsty after arriving home, so I had several refills of water and this entire thing of coconut water before unpacking my backpack from class. 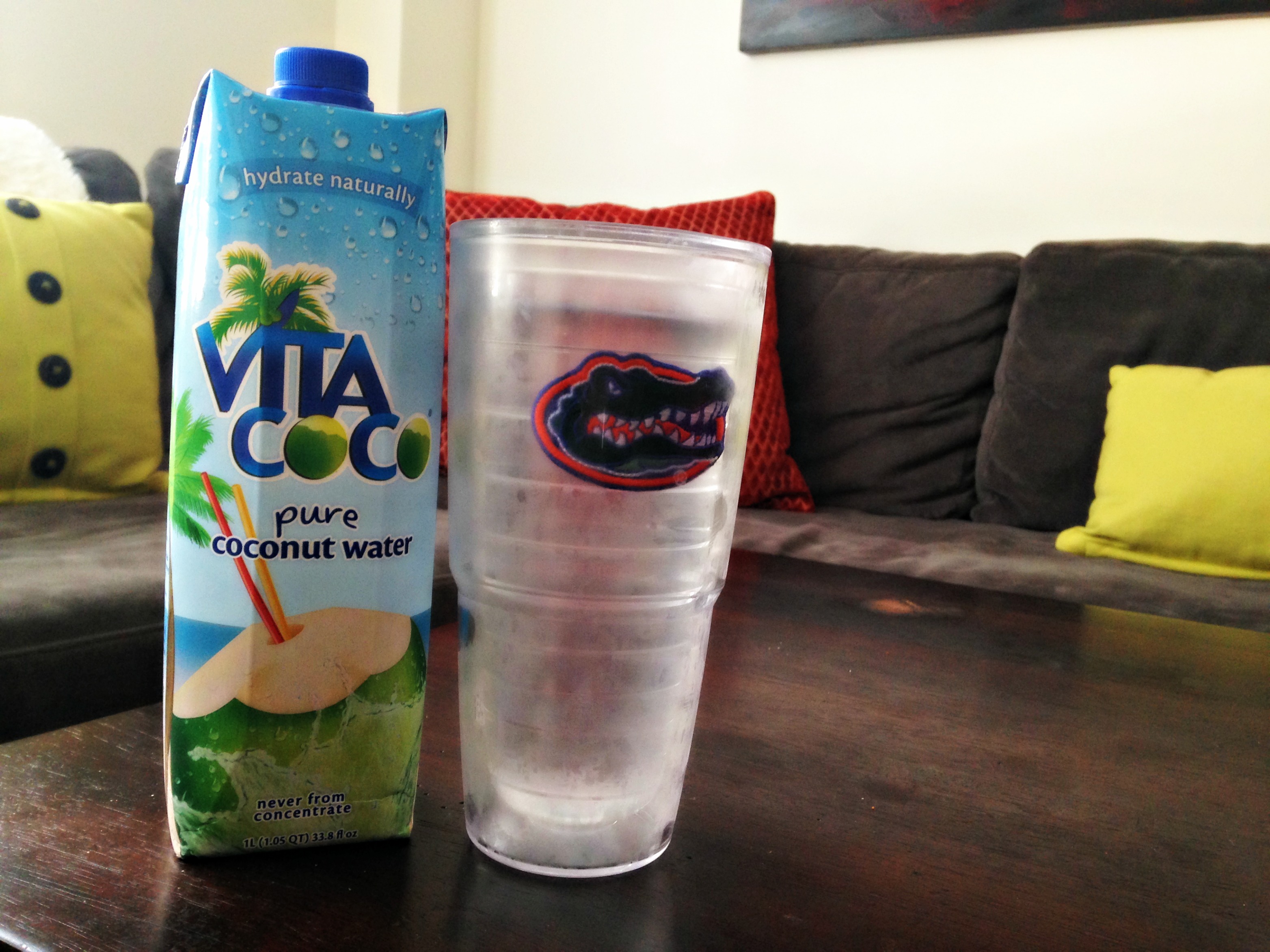 After I showered up and put away the groceries we had delivered via Instacart (which is an awesome service that has made Dave and my lives a lot easier), I needed more liquids and some greenery, so I made a green smoothie, with spinach, almond milk and blueberries. I also had a baked sweet potato topped with gobbs of delicious almond butter. And of course, more water. 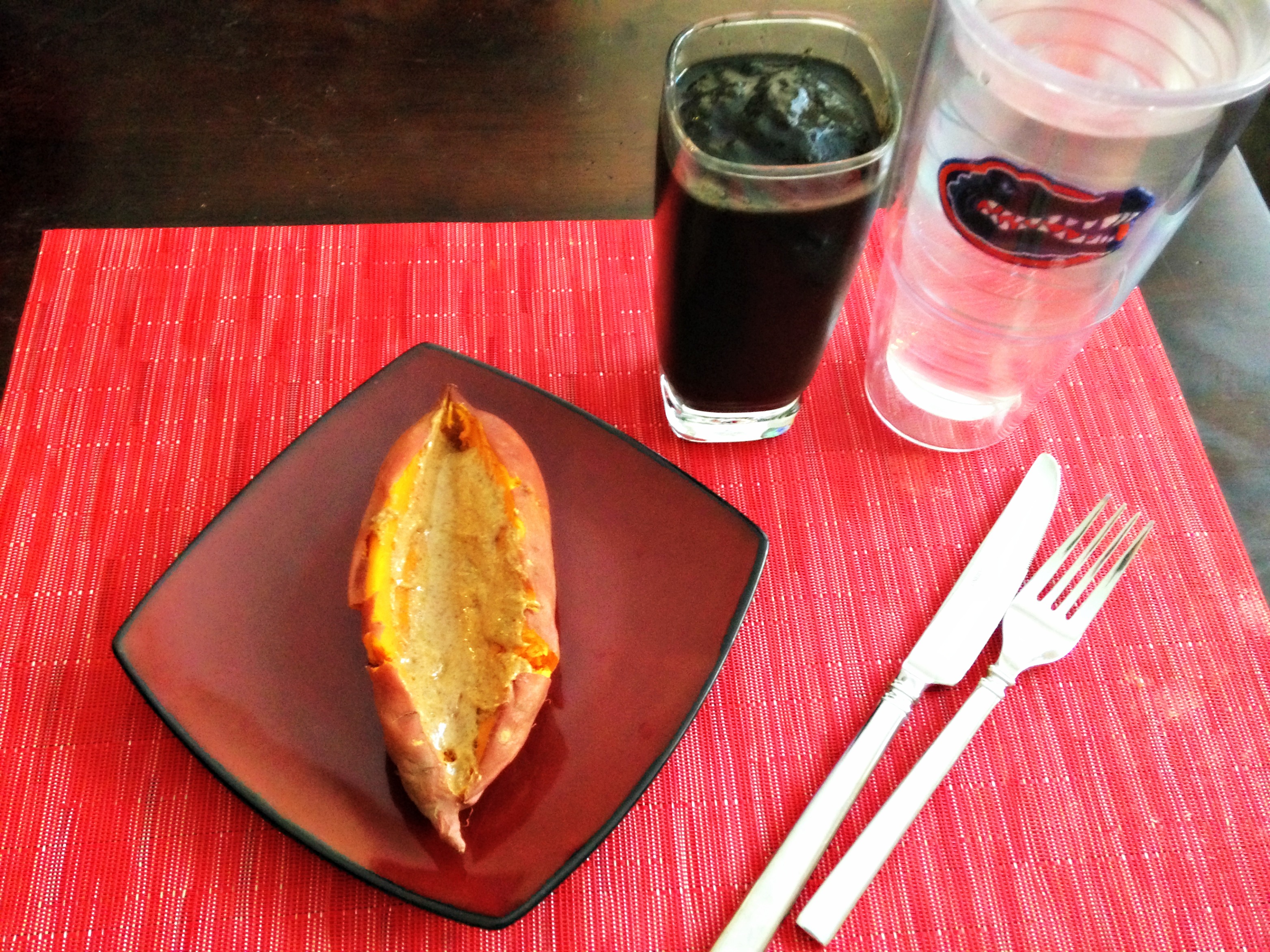 Just a few hours later, I had a nice serving of cottage cheese and mandarin oranges for some extra protein. 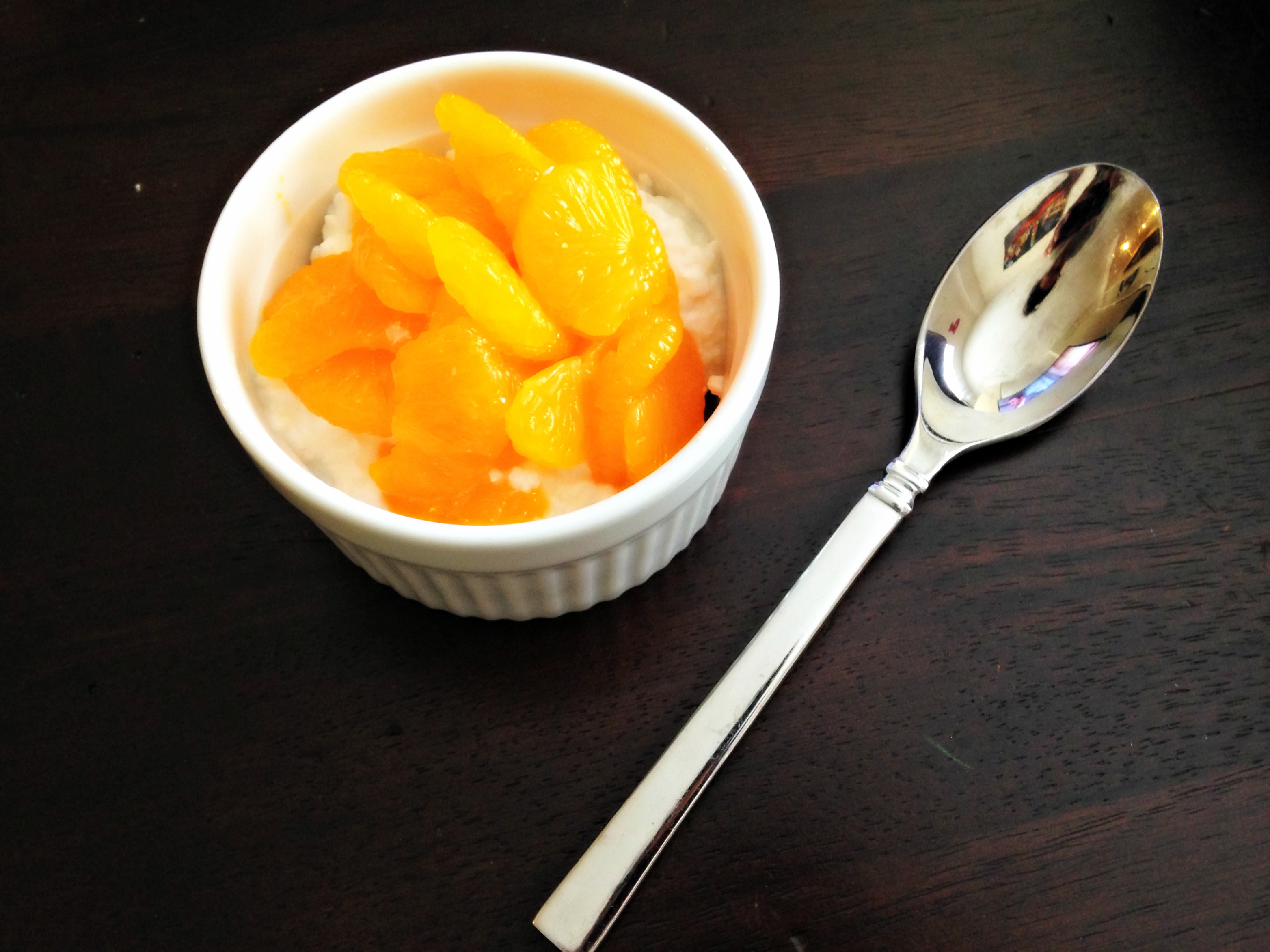 Dave and I went to do a little shopping in Union Square, and I picked up this Blue Monkey coconut water on the way back. It has chunks of pulp, and is one of my favorites. (Fun fact: Do not, I repeat do not, drink pulpy coconut water when teaching a group fitness class. I’ve made that mistake before … ) 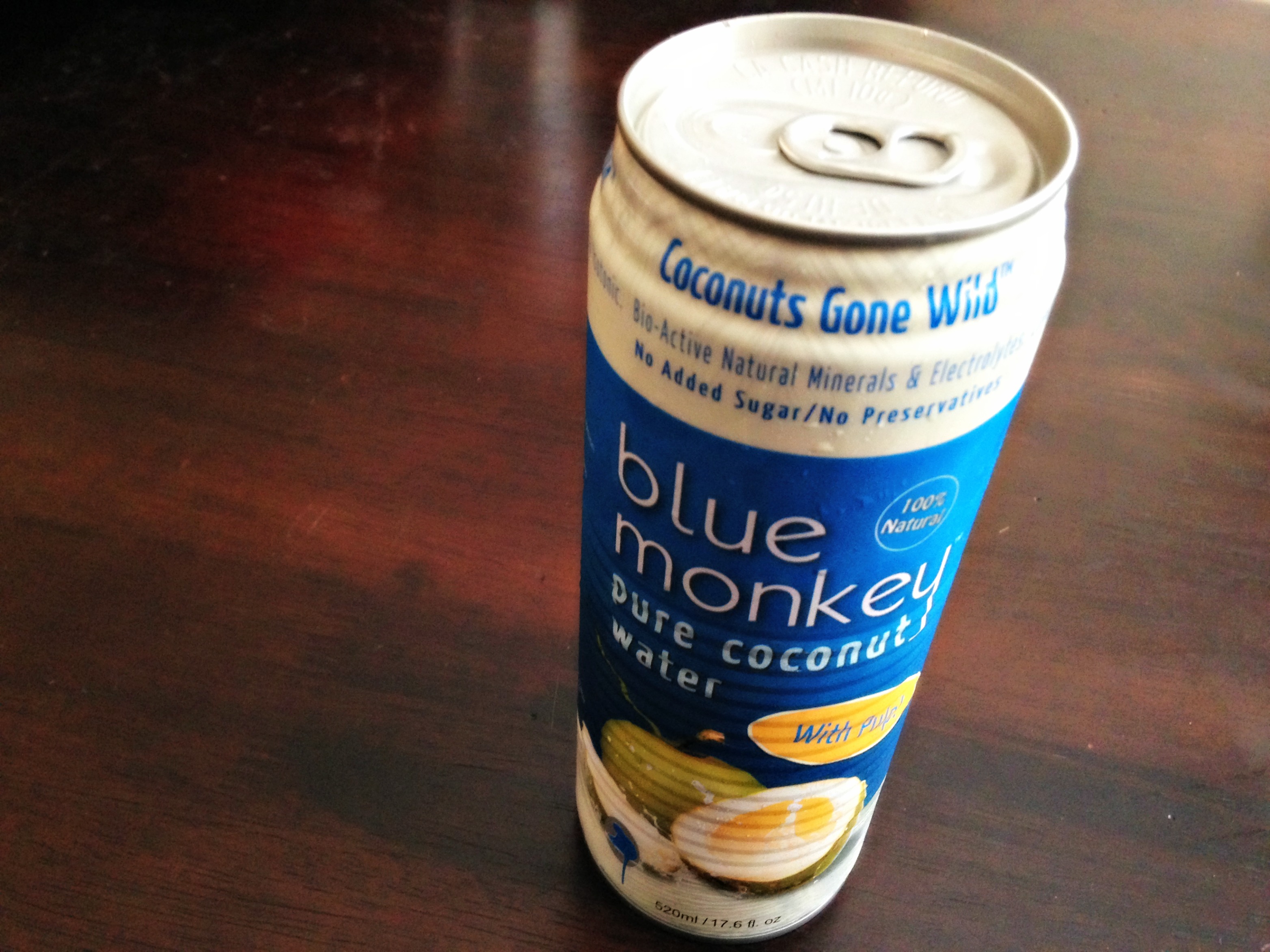 8 p.m. dinner at The Square

Because it was Saturday night, Dave and I went out to a nice dinner in the North Beach neighborhood at a newer place called The Square, right on Washington Square Park. The atmosphere of the restaurant was the typical dark, laid-back San Francisco scene. The service was good. The appetizers were good, but the entrees were just average. We had a fun time, but likely won’t return.

As usual, dinner started off with a round of adult beverages. I selected a Napa Valley chardonnay and had two glasses over the course of dinner. 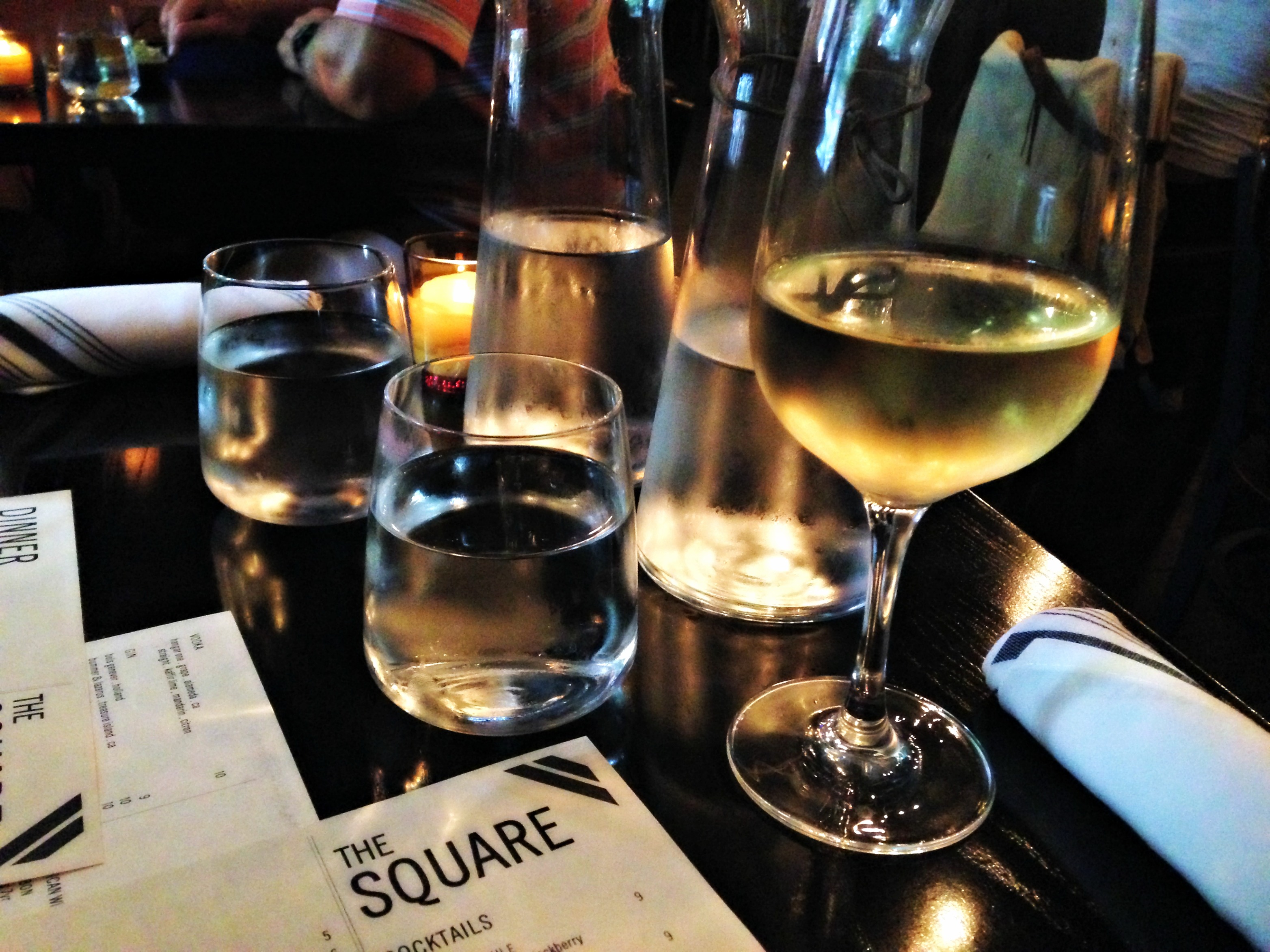 Next up was the house-made bread and butter. While reading some of the reviews of the restaurant before arriving, Dave and I learned the bread and butter was to-die-for. The butter was super salty, which was really good. And the bread was dense and fresh. Definitely a great way to start the meal. I especially liked the presentation of the butter on the slab and the individual rolls served on their own little plate. 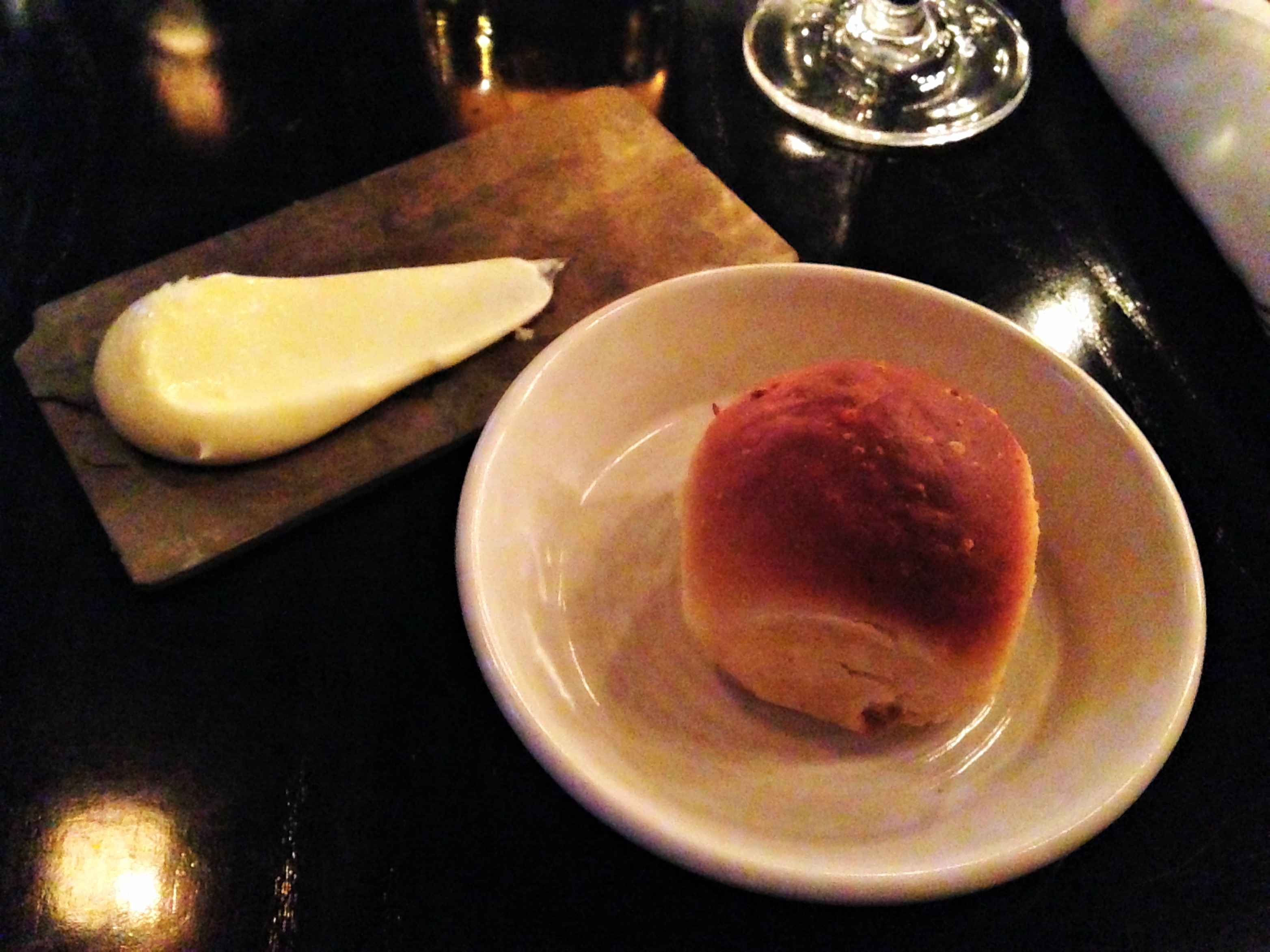 For appetizers, we ordered the beef tartare with house-made salt and vinegar chips and a kale salad, with roasted pistachios and feta cheese. I ate nearly all of the salad and a few chips and tartare. The chips were way too salty for my liking. In fact, they tasted much like regular store-bought salt and vinegar chips, which I would normally turn down. 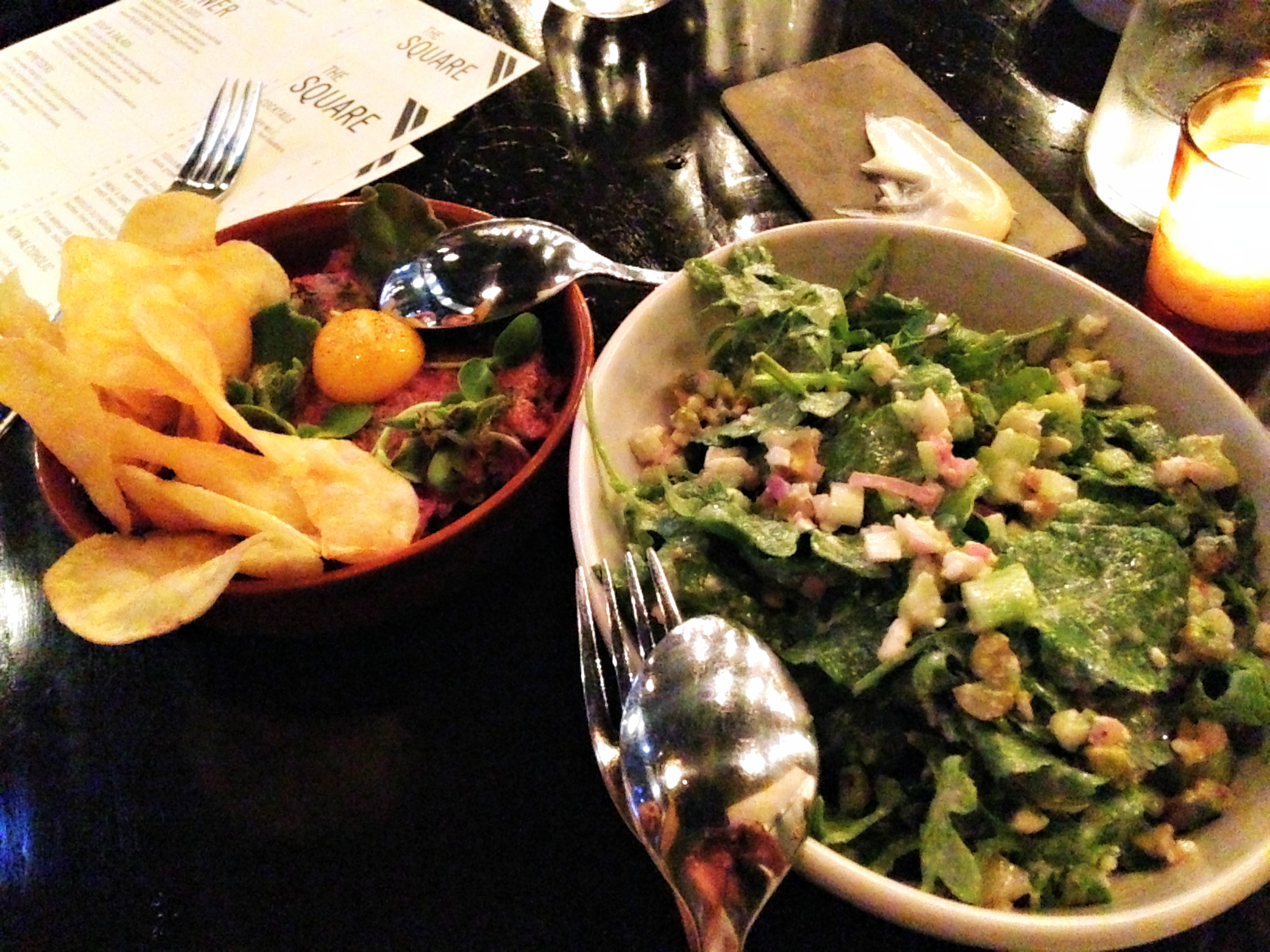 Many of the entrees on The Square menu were of the fried variety, so I ordered the pan roasted fish, which was sanddabs. I’d never heard of or had sanddabs before. It’s a plain white flat fish, similar to the flounder and found in the Pacific near the Bay Area. The sanddabs were supposed to come on the bone, but I asked that it be de-boned before arriving on my plate. The fish was served over some veggies and a puree of sweet corn. It was good, but it wasn’t great. I’ve come to expect mouth-watering delicious meals these days, and unfortunately it didn’t deliver. I did, however, manage to finish every last bite. By the time the entree arrived it was well after 9 p.m., so it was impossible to get a good photo in that dark place. But here you go … 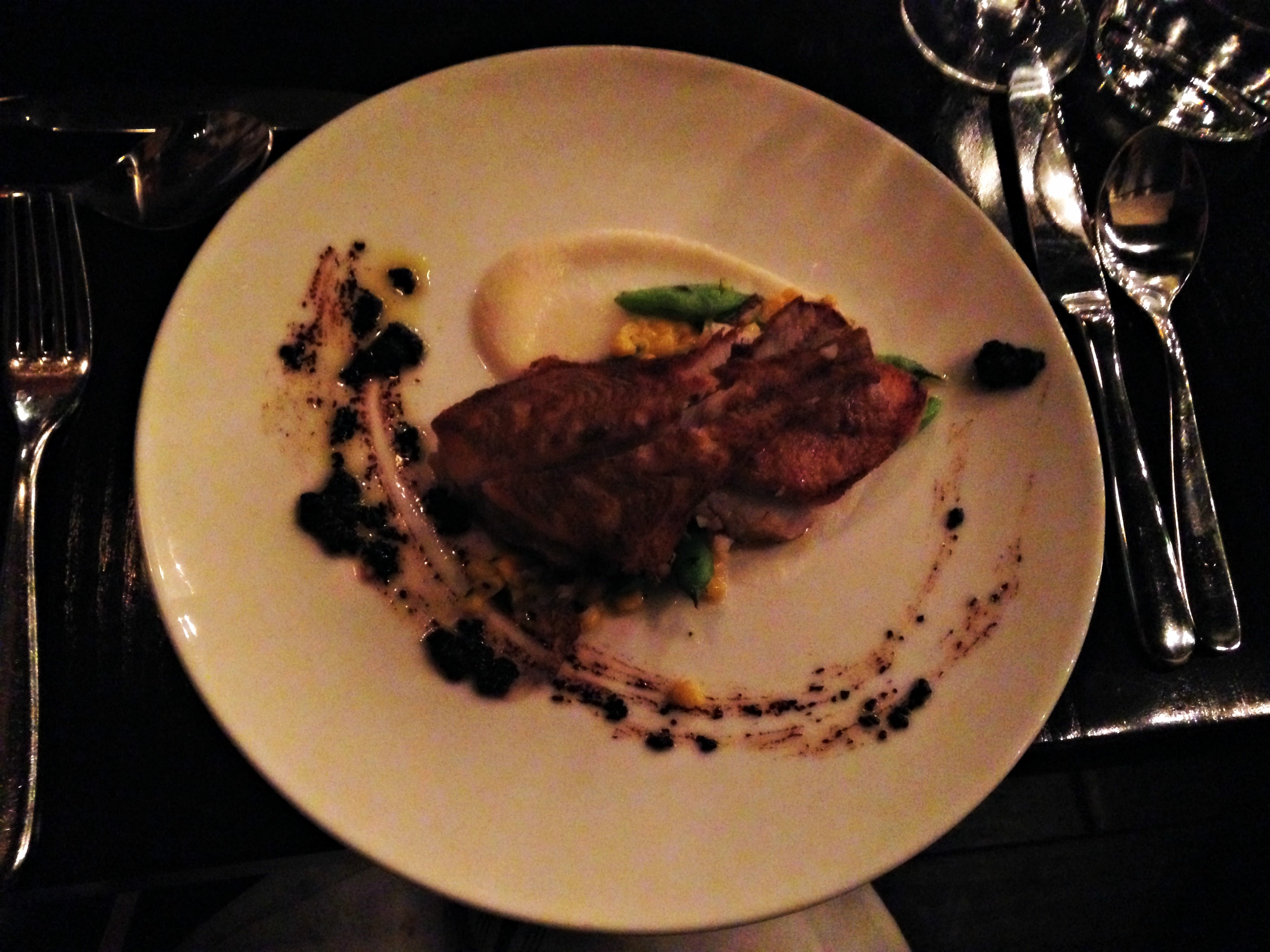 The ladies next to Dave and I ordered desserts, and I overheard their server saying how good all the items were. But then when the plates appeared at the table they were very small and uninspired. Knowing my high dessert expectations, we opted to skip dessert at The Square rather than be disappointed.

While we toyed with the idea of dropping into The Cheesecake Factory as I like to do on Saturday nights, instead, we made the healthy choice and went home. In need of a sweet, I dove into some warm almond milk and a ProYo. I’m so loving these healthy and creamy things, sent to me by the company to sample. So yummy. 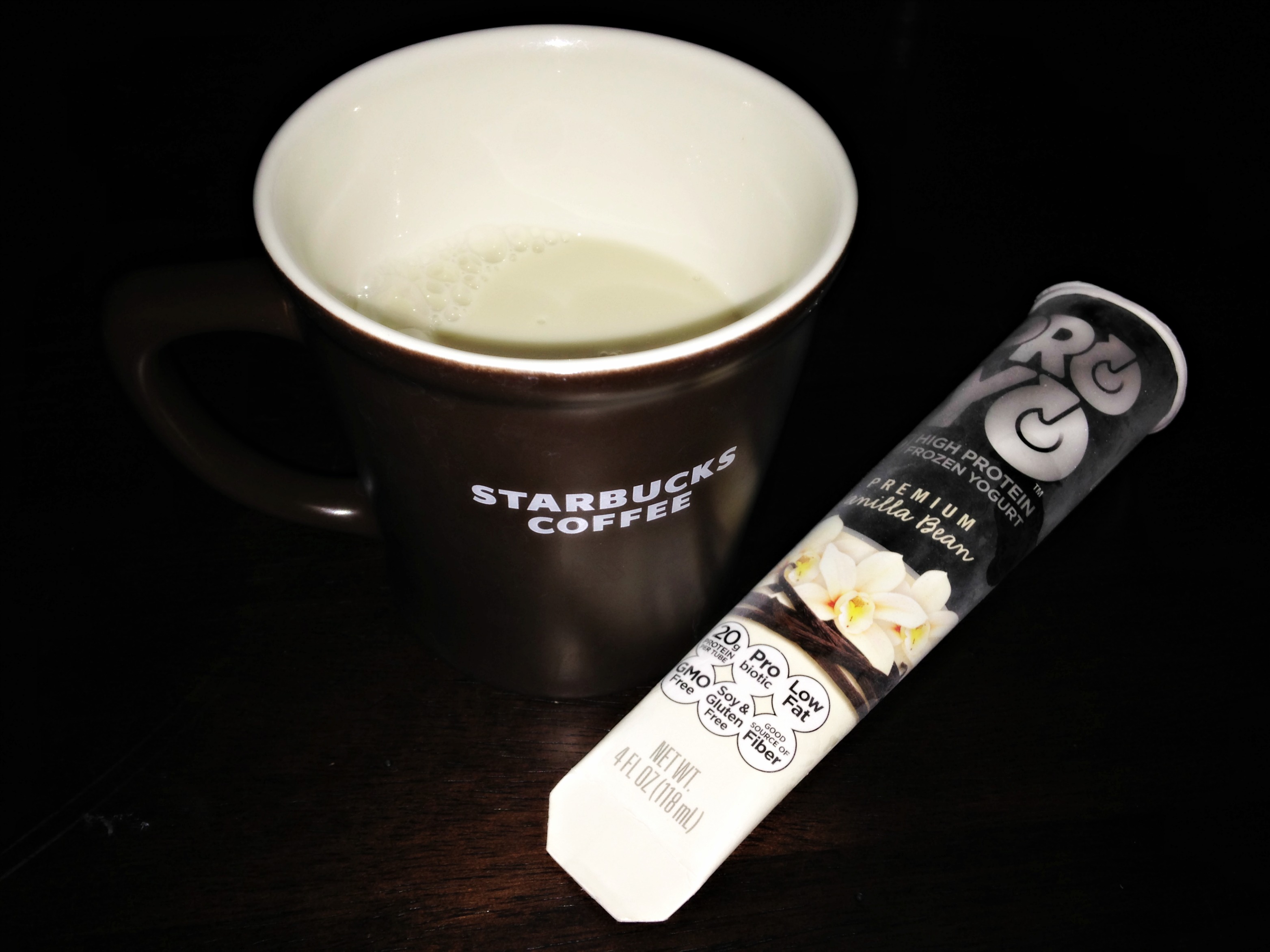 And that was a full day of eats. I drank an incredible amount of water, nibbled on my usual day-time eats and had a nice dinner out.

If you’re new around here, may I direct you to a few additional places you can connect with and stay up-to-date with A Lady Goes West: Facebook, Twitter and Bloglovin’.

Did you enjoy looking at this full day of food? If so, check out my previous posts below. And of course, thanks again to the hostess of this great feature, Peas and Crayons.

Do you have a favorite dessert? What’s the best thing you’ve eaten lately?