Cardio Barre claims it will discover the “dancer in everyday people,” and it’s all the rage in Hollywood. The list of celebrities that swear by this franchised workout is long.

Lucky for me, a studio recently opened in San Francisco, so I went to check out what all the fuss is about.

The studio is in the Hayes Valley neighborhood of San Francisco near the main drag of Market Street.

I wasn’t crazy about the location facing a busy street, nor the underwhelming outside of the studio. 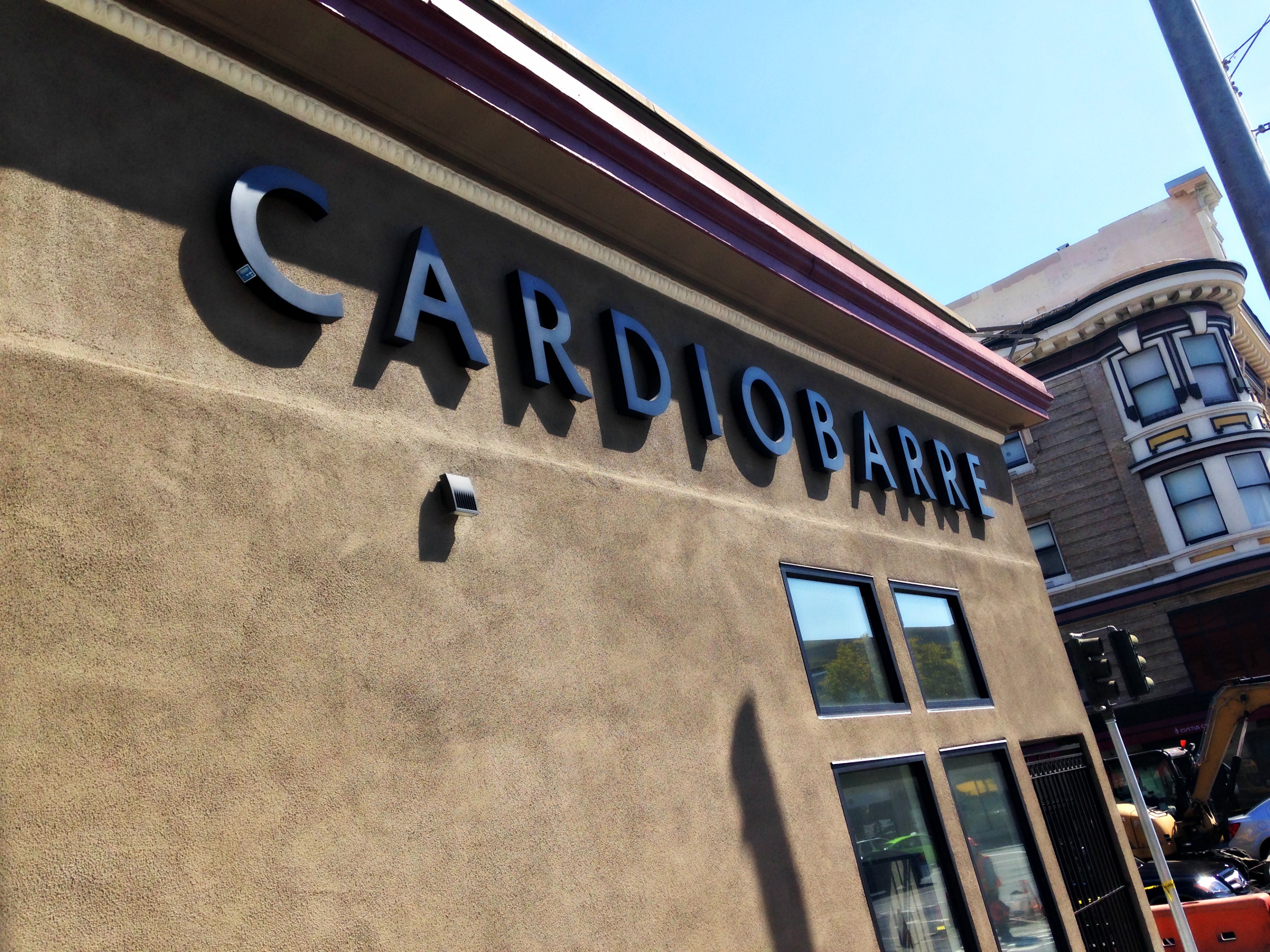 Yet, once I left the construction zone on the street and entered the building, I was pleasantly surprised to find that the interior is quite nice. There is a little lobby with a seat, a check-in desk and some retail. 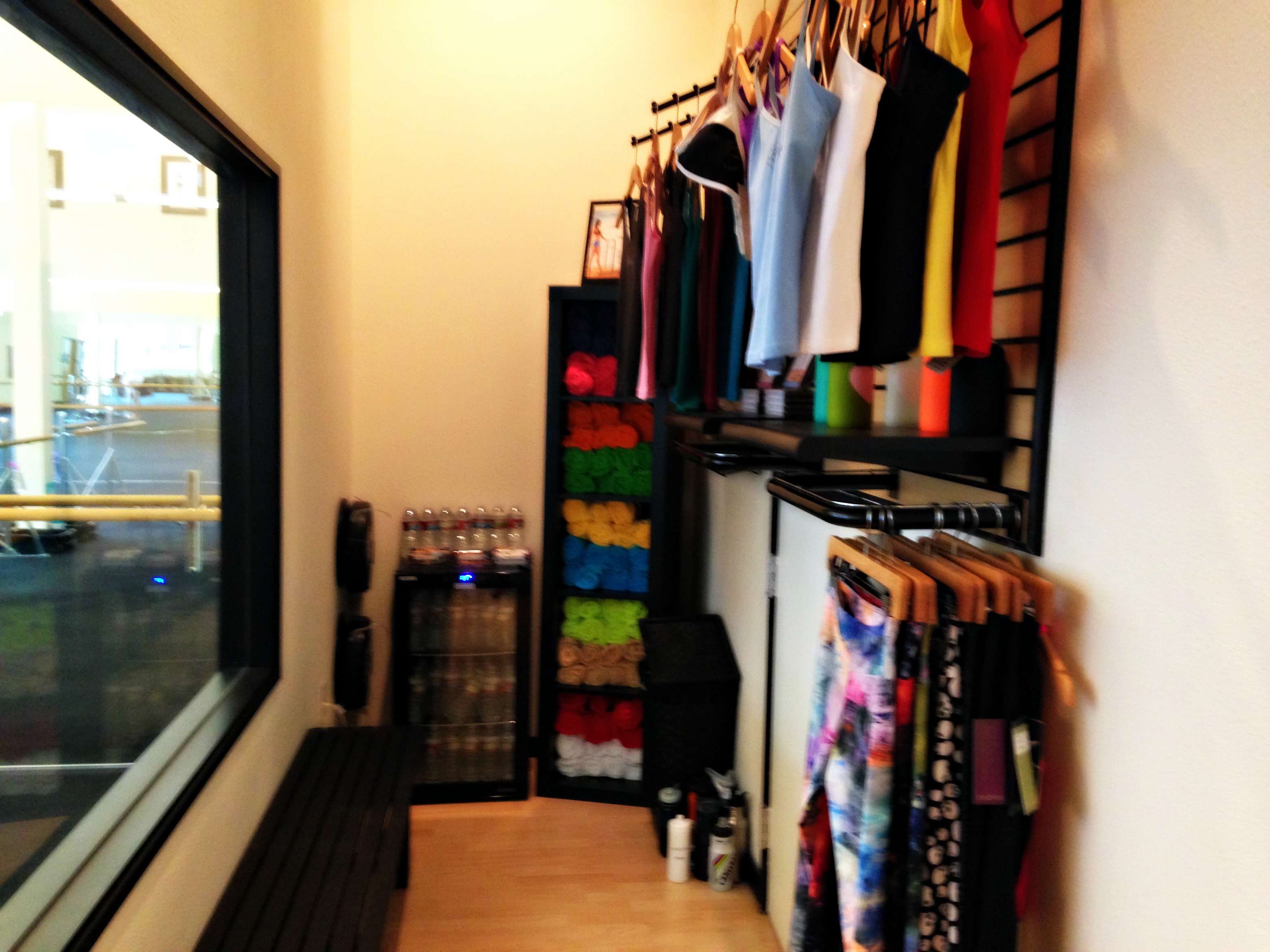 The actual studio space is huge. Much larger than the other private studios I’ve attended, there are tall mirrors on each wall, barres in the middle of the room and dark-blue carpeting, which seemed super new and soft on the feet. 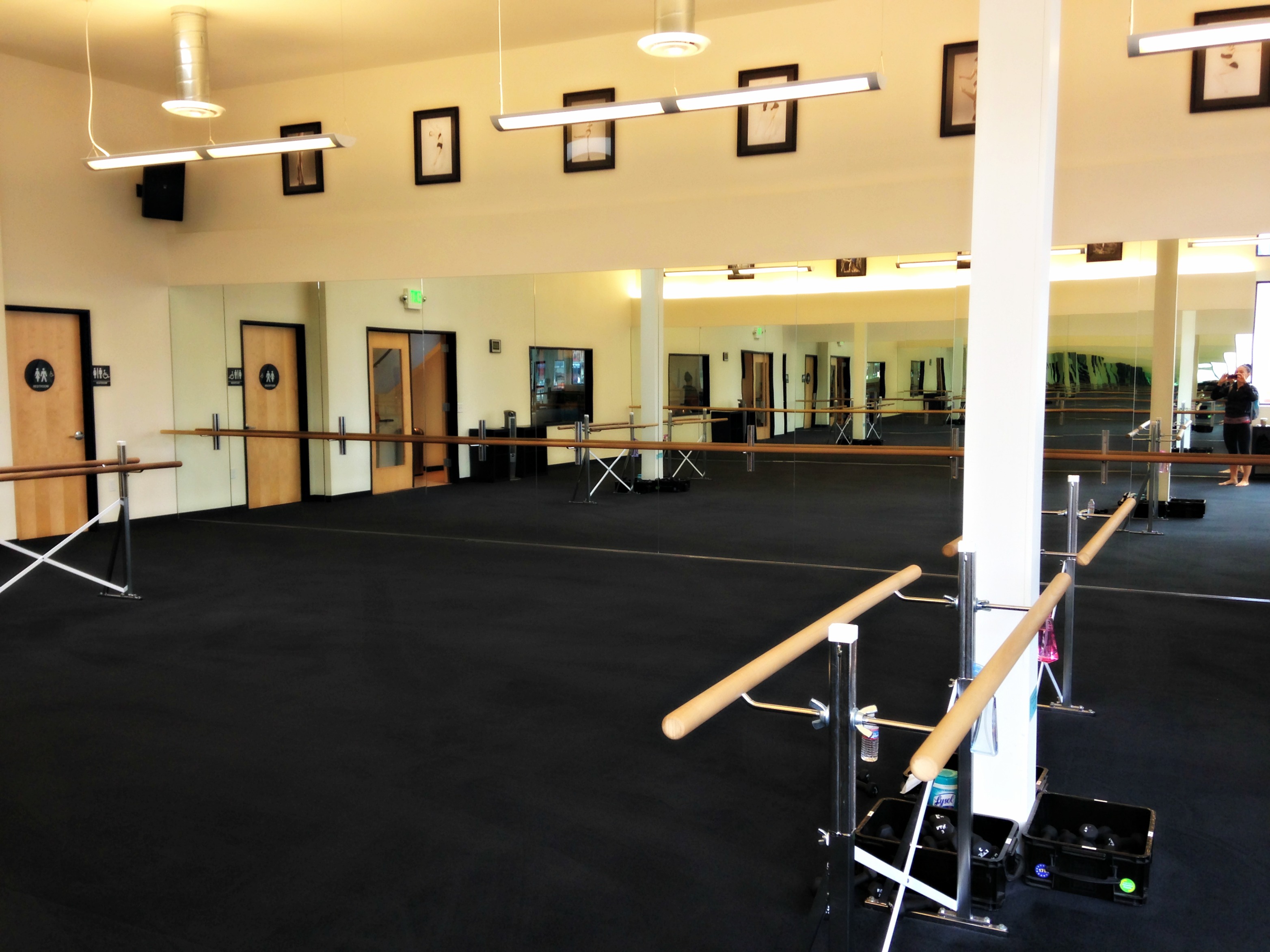 Now that you have an idea of the environment, let’s get to the details on the actual class.

What is Cardio Barre?

Well, it’s a barre class, with some cardio.

After attending Cardio Barre, I did a little research on the website and it appears the class was created by a dancer who suffered a career-ending hip injury. He wanted to stay active, but struggled to find the perfect workout to fit his situation. He wanted something which would be high energy, but not high impact. Based on the lack of something appropriate in the industry, as well as his own needs, he designed Cardio Barre. Therefore, it’s a cardio workout that centers and challenges you, but is completely safe on the body and gentle on the joints.

I attended a Cardio Barre “Fast Friday” class, which is designed for someone who has taken a few beginner classes. It’s basically the intermediate level, and yes, it was fast. Advanced classes are also offered, and it’s a good thing I didn’t show up to one of those.

I arrived via Uber a few minutes early, took some pictures and then set myself up in the middle of the room, which was suggested by the instructor so I would have clear visibility of the front.

After a quick welcome, the instructor, Hilary, turned on the music and the next thing you know we were going. The tunes were upbeat, modern and fun, and they provided some good motivation throughout the one-hour class.

We warmed-up on the barre with plies, leg lefts, push-ups off the barre and even some stretching. Hilary demoed each move only one or two times and then walked around the room to correct people — which is something I look for in a class to ensure that I’m getting into the proper form to achieve optimal benefits of the exercises. The “changes” (a term I learned last week while attending Pure Barre for the first time, which means the number of movement variations you have left on a certain muscle group) happened so quickly that I missed the first couple reps of nearly every single set of exercises. We just kept moving and changing and moving and changing.

Hilary would show a move, run around, help people, then run back up and show another move. She was an animal. She showed strong dancing kills, as well as instructing skills. I was super impressed with her coaching, motivation and overall enthusiasm to get us through a challenging session.

And I say challenging, because there were no breaks. No breaks. In fact, it was 45 minutes into the class that she said we had a less-than-one-minute break to grab a sip of water. I couldn’t believe it.

Throughout the hour, we did some much bigger moves than you do in a normal barre class, like high kicks to the front and side, big arm lifts, knee lifts, a bunch of stuff while elevated high on the balls of our feet and more. It was a lot of movement at a fast tempo.

And like other barre classes, we used some very light weights for arm work. We did tricep kickbacks and extensions with some small isometric holds, which seemed to go on forever. At times it burned, and Hilary said, “learn to live in the burn and love it.” Yes, live in it and love it. Ouch.

To achieve that burn, we each needed a single one-or-two-pound dumbbell provided in bins throughout the center of the studio. 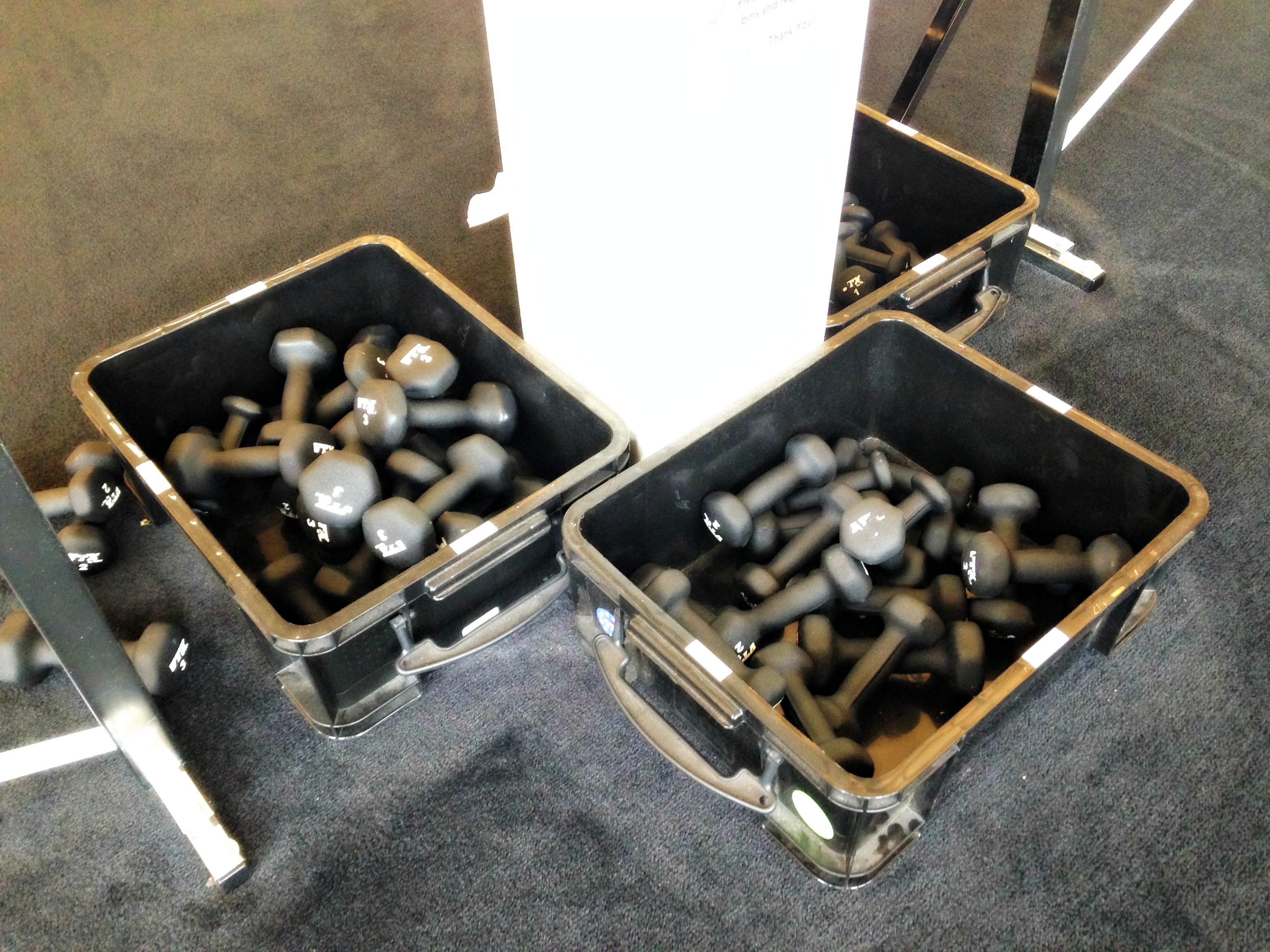 The last five minutes of class were devoted to core work and stretching on the ground, in which we were all supposed to lay down on a towel. Because of the email confirmation I received when reserving, I knew to bring a full-sized towel, and I selected a personal favorite from my stash. This lovely and colorful number is one I bought in Myrtle Beach on a mother/daughter trip a few years back. 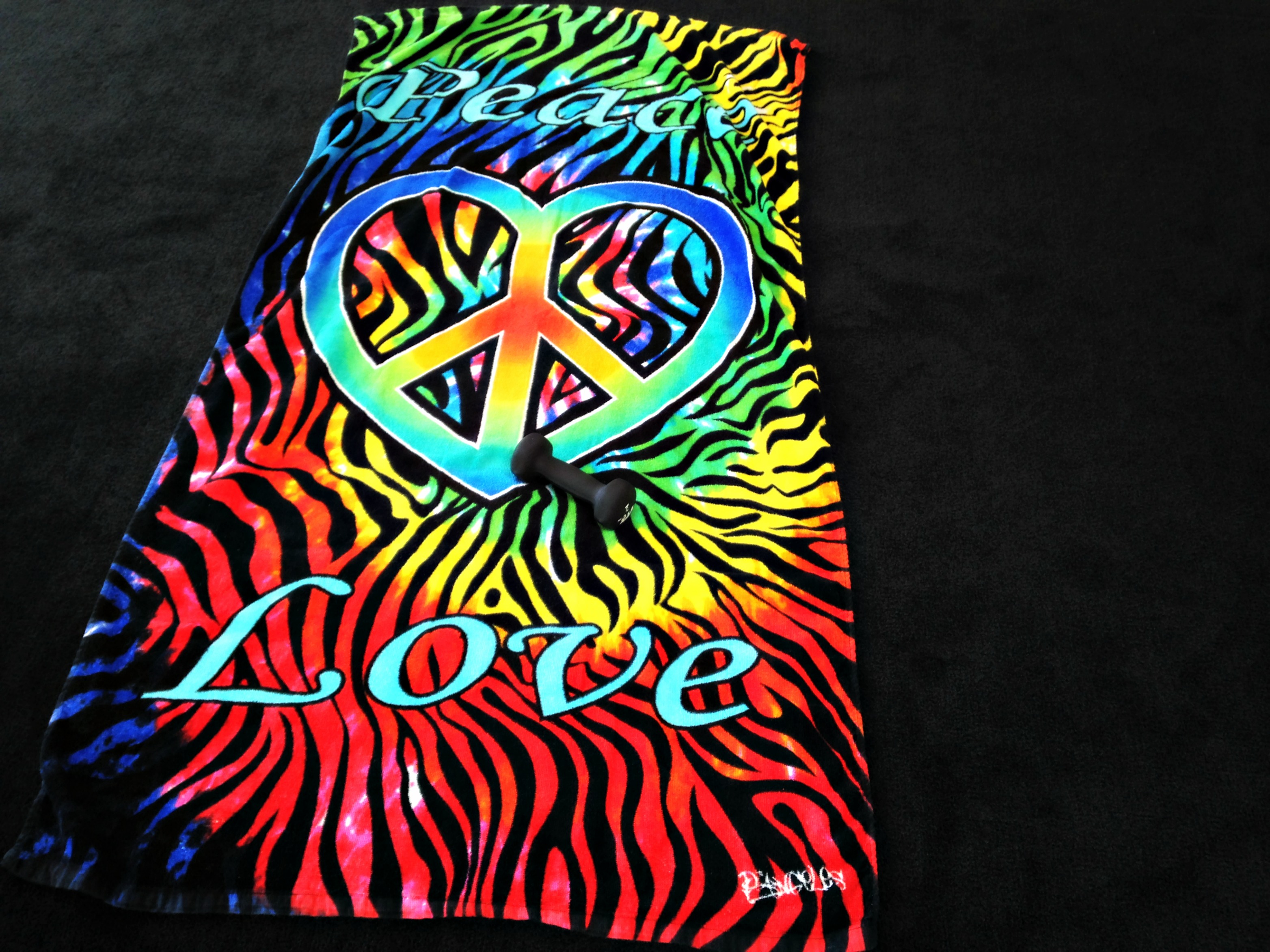 You’ll see my two-pound weight on there. That little thing offered quite a challenge to my arms, believe it or not.

But really, that’s all you need. We did work at our spot on the barre, then came into the middle of the room a bit and ended on the floor. While Cardio Barre is not as stationary as other barre classes, it still basically allows you to stay in your own bubble without moving around too much.

By the way, I chose to wear toe-less grippy socks, but could’ve done the class in bare feet as well, which is what most people did.

Did I sweat? Yes.

Did I huff and puff? A little bit.

Did my legs and arms burn? Yes.

Did I have to stop at times because I just couldn’t keep up with the changes? Embarrassingly, yes.

Did I feel a little less than graceful during some of the big ballet moves? Yes.

Was it a good workout? Yes.

Would I go again? Yes. And I’d wear a sweatband and leotard to really get into character.

Cardio Barre has a lot more dance-inspired moves than a regular barre class. And the teacher used actual ballet terms like, plie, releve, attitude, grand plie, first position, second position and so on. My class was full of women and one man (who just so happened to work at the studio and checked everyone in), and it seemed like many of the students knew what they were doing already. For future reference, it would be helpful to know what some of those terms were before attending a class.

Overall, Cardio Barre is challenging. If you’ve never danced before (which I have for a minute), you will feel a bit awkward. You will get heated. You will sweat. And you will move incredibly fast if you attend the Fast Friday version of class. But you’ll feel great after-the-fact.

While it’s not as intense as some of the classes I teach, like Les Mills BODYPUMP or Les Mills BODYATTACK, it still offers a great cardio kick without jumping. I felt like I moved freely and stretched my limbs, while also getting my heart-rate up and doing a little bit of toning. I was not sore after class and felt totally recovered by the time the cool-down was complete.

Based on my experience, I would highly suggest attending a couple beginner classes before heading to Fast Friday, but because of the stationary low-impact nature, it’s something that you could attempt as a novice and not get hurt. You’ll just be a bit behind the group during the quick changes.

Cardio Barre is a great addition to a fitness routine, which could be complemented with a little more heavy-weight training. It’s harder than a regular barre class because of the fast-paced bigger cardio moves, and still offers that same burn you’d expect in your core, arms, seat and thighs. Especially if you struggle to get in enough cardio, this could be a fun way to incorporate it.

* Disclaimer: I attended the class at Cardio Barre for free, as part of my complimentary one-month membership to ClassPass. Learn more about the ClassPass program in San Francisco in my post about the service.

Does your city offer barre classes? When is the last time you danced? Like really danced?