So what’s it like to take a SoulCycle class? I’m about to tell you …

SoulCycle is super trendy. When I’m walking down Union Street to work in the morning, I see a flood of sweaty red-faced ladies coming out of the studio just as class lets out. And a lot of them are even decked out in SoulCycle-branded apparel, so they definitely drink the Kool-aid. And now I can see why.

SoulCycle started in New York City about 10 years ago with a goal to make fitness classes not feel like work, and today there are 25 locations nationwide. SoulCycle has a clean and cool brand, friendly employees and an awesome spot in the Marina neighborhood of San Francisco right next door to the Equinox where I work. This location is fairly new and has been the talk of the town. I have clients who are obsessed and some friends who go regularly. 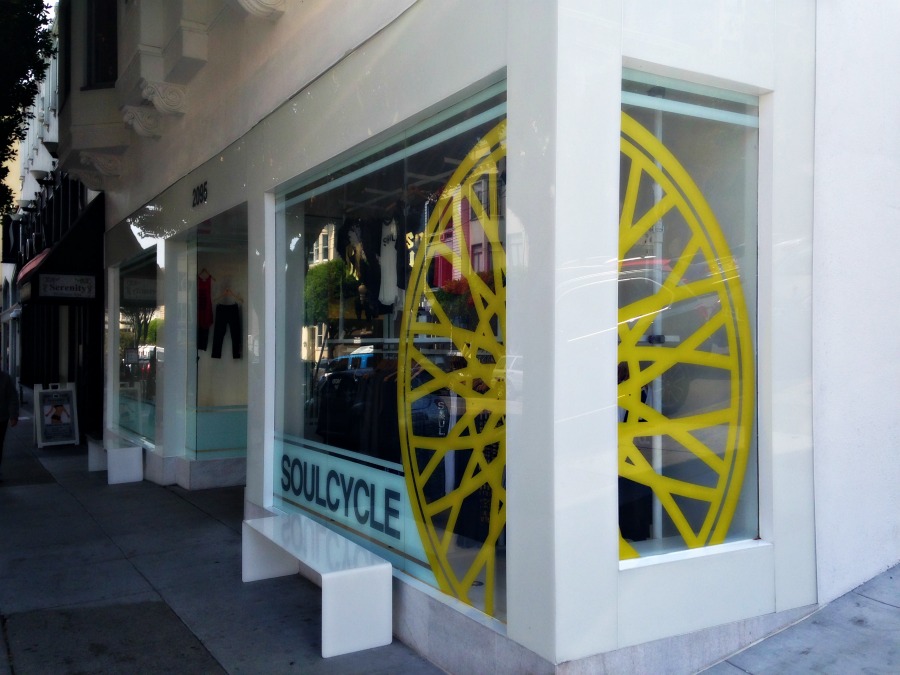 What did you say? A popular branded workout that is designed to change your soul? Obviously, I had to give it a try …

The folks at SoulCycle on Union Street were nice enough to invite Equinox personal trainers to experience a class for free during some of the less-busy times. Normally, it’s $20 for your first visit and $30 per class after that unless you buy a package.

Therefore, this week my fellow trainer, Lauren, and I tried the 12:30 p.m. class. We weren’t able to reserve a bike online (which is a huge deal in the SoulCycle world, and apparently the best spots in the peak classes fill up as soon as the reservation windows open on Mondays), but we walked in and had no problem getting bikes.

The mid-day classes in the Marina aren’t super full, which worked to our benefit. When we arrived, we signed a waiver, chose our bike, were provided with free rental cycle shoes (it’s usually $3 for rental), and then given a full tour and bike set-up tutorial by the very smiley and helpful SoulCycle team members. We felt very welcomed and prepared. 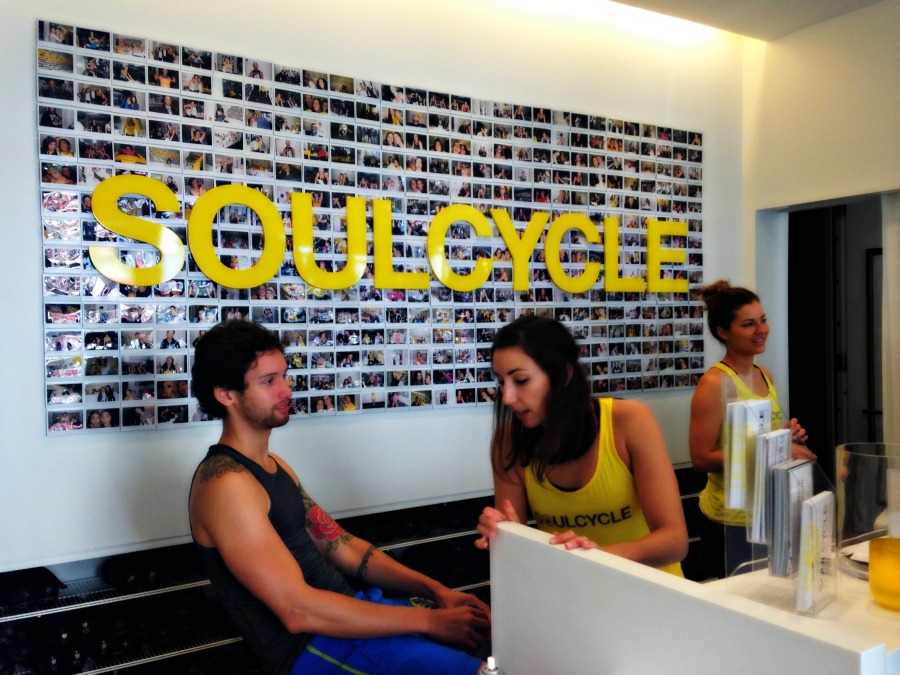 Here’s some of the merchandise available for purchase, which is all pretty cute. 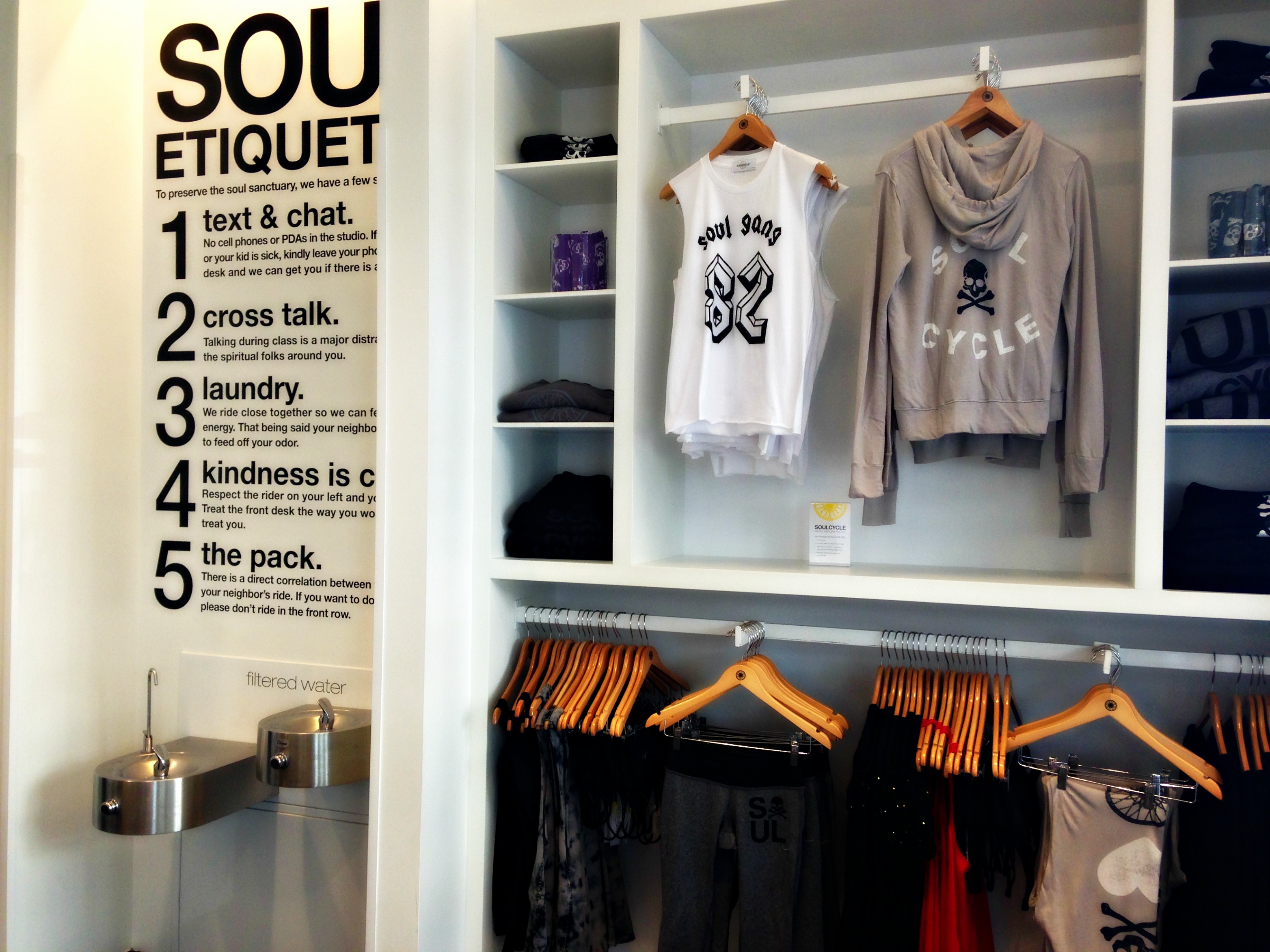 Once class begins, the dark studio is lit only by candlelight, unless the teacher flashes the lights on and off during transitions. There are tons of bikes, and they are just inches from each other on both sides. The butt of the person in front of you is truly about six inches from your face at most. And because of the close quarters, rules are posted about personal hygiene and side conversations. If you are claustrophobic, you may have issues with this type of set-up. And if you have sensitives to noise, you will want to wear earplugs, because this was the loudest studio I’ve ever experienced, most likely because of speakers on the ceiling every couple of feet. 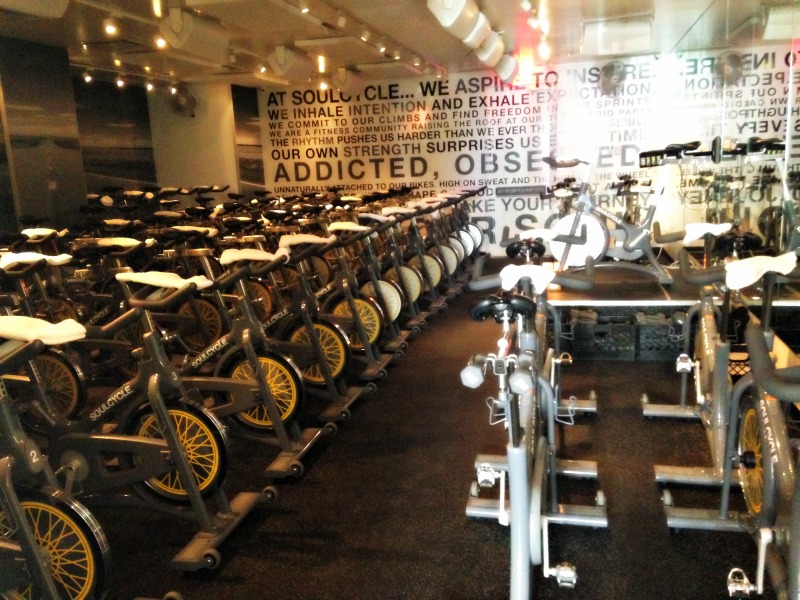 We sat in the second row in the middle, with a clear view of the instructor. The instructor of the day was Natalie, a SoCal native. I discovered that fact when reading her background on the SoulCycle website, which I thought was just another cool feature of the brand by offering a personal story about everyone who leads classes.

The class began right on time, and we spent all 45 minutes on our custom-designed SoulCycle bikes. 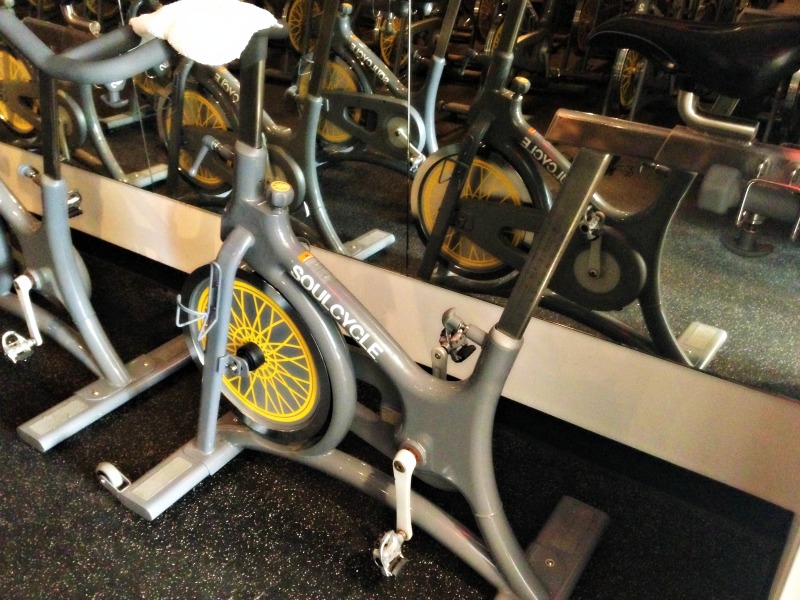 Riding out of the saddle to loud music

To warm up, we started pedaling with a light resistance on the bike’s wheels, lifted up our butts to hover above the saddle (bike seat), and Natalie called out the beat to get everyone to move in unison. SoulCycle classes are all about the beat, so she reminded us of it every time we changed songs with a “Left … right… left, right, left” cue.

We continued to adjust the resistance on the bike throughout the class, and Natalie was pretty clear with how much to add on, usually a quarter or half turn up or down.

It was about 10 minutes into class that SoulCycle showed me how it was different from any other cycling program I’ve ever taken. We started “dancing on the bike” if you will, while peddling, we put our hands on the middle handlebars and did some push presses toward the handlebars with our upper body as we rode to the beat. Natalie threw her head and ponytail into it and made it feel very dance-y. She called this “elbows back” and said this part was supposed to work the abs, which I think it did, but mostly it was just a good opportunity to bob up and down with a fast beat, all the while riding in hovered position just above the saddle.

From there, we did a couple seated sprints, with our hands narrow on the handlebars. Then there was a song during which we jumped up off the bike seat, and then sat down again for quick seated and standing intervals. That was my favorite portion of the class by far, because it reminded me of a traditional cycling class.

I will say that in this particular class, we spent much of the time with our butts hovering over the saddle, which really works the posterior and backside chain. However, if not coached properly, someone could definitely cheat on this portion and not really feel the work in the back of the legs if they lean forward onto their quads, which is a common newcomer mistake. Natalie gave us cues to brace the abs, keeps the arms light and hips back to ensure we were in position, and she even hopped off her bike once to help a new person get into the right form. I was amazed at how easily she pulled her cycle shoes out of the pedals, because I was not so efficient when dismounting. 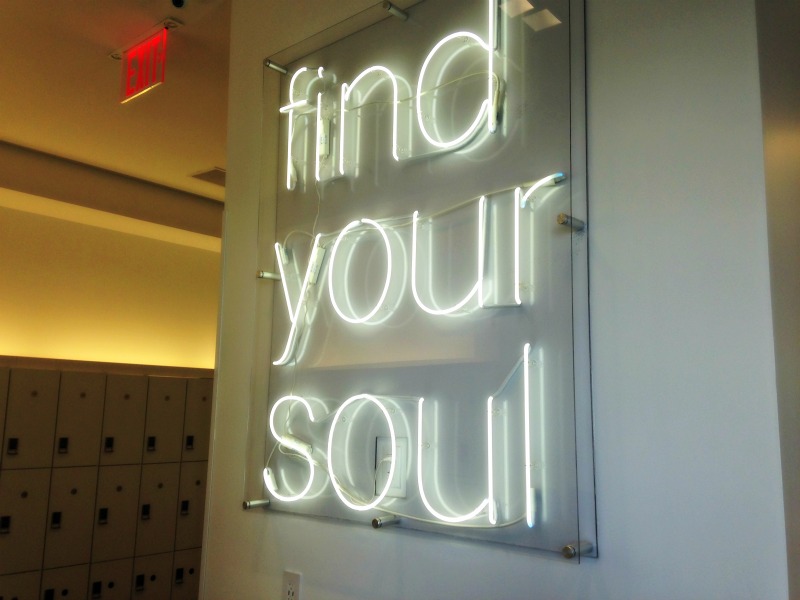 And then we used weights on the bike

About 30 minutes into the class, we slowed our legs down, added some resistance on the wheels and picked up our small hand-weights, which were on a little rack behind each bike easily accessible from the seated position. Each bike comes with two-pound weights, but Lauren and I elected to switch out for the three-pound weights. This began the five-minute upper-body weighted portion of class, and Natalie got off her bike and walked around the room. With the little weights, we did small tiny pulsing isometric holds, combined with larger rows, bicep curls and tricep extensions. Similar to a barre class, the use of very light weights and taking the arms to fatigue was challenging. We didn’t put our arms down the entire song, and my shoulders were absolutely burning by the end. It’s hard to imagine that tiny weights can cause that kind of burn, but they sure can.

Once we had our weights back in the rack, we did another climb and ride out of the saddle, a few sprints and then it was over and time for the three-minute stretch on the bike.

Normally the cool-downs and stretches of a class are totally throw away. But I loved the stretch in SoulCycle, because Natalie had us stretch our hips and piriformis (butt muscle) by standing up, leaning forward and putting one leg on the handlebars in a pigeon position. Maybe that is customary in cycle classes these days, but I had never done that one before and loved the way it loosened me up. I typically do active piriformis stretches before my workout and find them very beneficial for better range of motion in the lower body.

SoulCycle is short and sweet. Because most of the classes I attend and teach are closer to 55 minutes or an hour, SoulCycle’s 45 minutes seemed very quick to me, and I like how a 45-minute workout can fit into a busy day.

However, because I didn’t have a watch on and there was no clock, I had no real idea of the time, so when Natalie told us it was our last push and she could see the finish line, I thought she meant of that particular sprinting song. I was shocked when the class was over, and I wasn’t quite ready to be done. I hadn’t reached a big peak and was ready for more.

A major high point of the entire experience was the staff at SoulCycle. From the front desk people to the instructor. I had heard that SoulCycle prides itself on choosing great instructors, and Natalie was super energetic. She looked, acted and lived the brand through and through. She was clear, offered coaching, motivation and even shared a little bit of fun personal information during the upper-body weighted work to show her personality.

Also, I like the fact that cycle shoes were required, because it helped me feel locked in to the pedals, and not all cycle classes require them. You really miss out if you don’t wear the right shoes, and I’ve actually heard it helps you burn more calories by staying tight to the pedals and maximizing muscle recruitment. 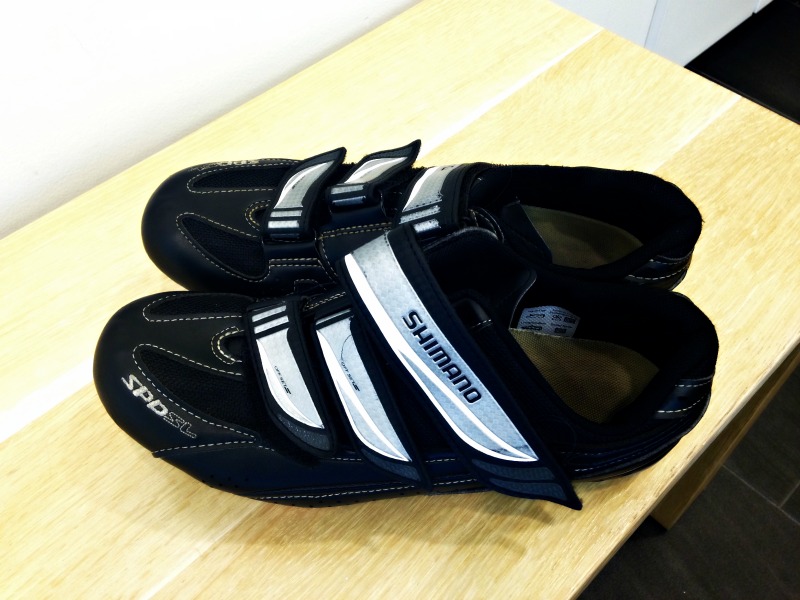 I’ve taken my fair share of cycling classes, mostly Les Mills RPM, but I hadn’t taken one in about a year. But I can certainly say that SoulCycle stands out as completely different and more fun than any other class I’ve taken on the bike. The chance to add upper-body movement, jumping, bobbing, and even picking up little hand-weights made it feel much more like a full-body workout than just a cycle session. It’s anything but boring, and with a super dark room, a pulsing sound system and candlelight, it’s an immersive experience. You feel like you’re working even if you aren’t, because of the close quarters and dripping sweat from others around you.

So what’s my professional opinion? I think SoulCycle provides great cardio and a little arm toning. It’s a good addition to a workout program, but you’d still need to do other things to build muscle and give your body variety. I would love to go again and experience another instructor’s class to see how it’s different. Especially the music, because Natalie’s selection of hip-hop probably wasn’t my favorite.

I didn’t walk out overly exerted. Although I followed the resistance instructions and worked hard, I think maybe I should have gone even faster to really empty my tank in the time allotted. Now I know not to hold back for next time. 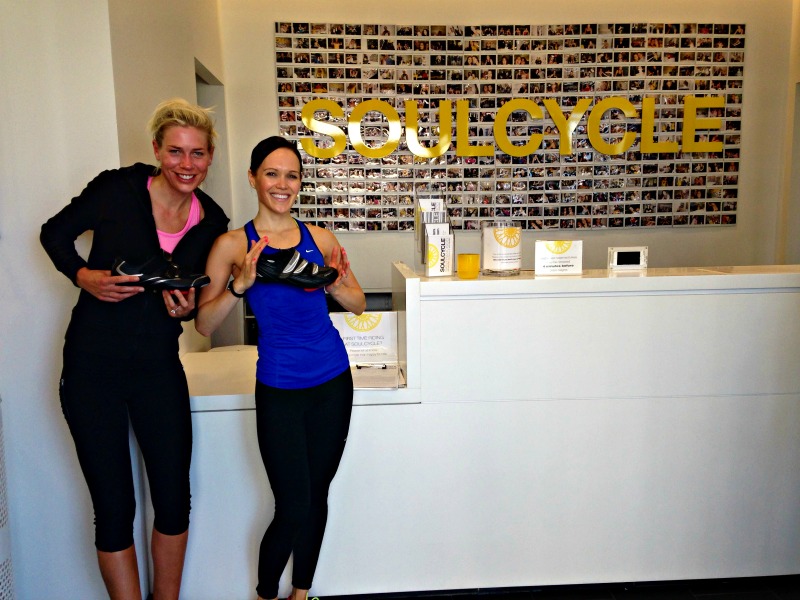 Moral of the story? SoulCycle is supposed to leave you feeling empowered and mentally and physically stronger. While I loved the scene and the trendy vibe, I wouldn’t say I was emotionally moved. But hey, at least now I can provide some input during all the talk about this class, and that’s a win in my book.

* Disclaimer: I attended this class for free as an Equinox employee.

If you’ve enjoyed this class review, feel free to check out some of my previous recaps on all the fun studio classes on the Fitness page.

Have you ever tried SoulCycle? Do you like to take cycle classes?

What’s your favorite time of day to work out?