Food is a frequently discussed topic on A Lady Goes West. Since moving to San Francisco, I’ve experienced the most delicious and diverse food of my entire life.

Dave and I absolutely love to go out to new restaurants, and we make it a point to visit one new restaurant a week. While we’re healthy-home-cooked-meal-eaters during the week and during the day-time, we always allow ourselves a nice meal out on Saturday nights.

We could go out to dinner on the weekends for years in the City of San Francisco and never repeat a restaurant. We’ve been in the Bay Area a year-and-a-half and have visited nearly 150 restaurants to date.

We weren’t always this way. In fact, when we lived in Orlando, we didn’t go out to dinner quite as often, and we stuck to our favorites, rather than trying new places. And we never spent that much money. However, in San Francisco it seems not only acceptable, but nearly expected, to use quite a bit of your discretionary income on food and drink, because everything is expensive.

That being said, I’d like to take a look at some recent meals we’ve enjoyed that were quite tasty, as well as my strategies for fitting in indulgences in moderation.

A couple of weeks ago we visited an alley restaurant in the Union Square neighborhood called Hops & Hominy. It’s a Southern place with a lot of character.

My top dish from Hops & Hominy was the kale and nut salad that we enjoyed as an appetizer. 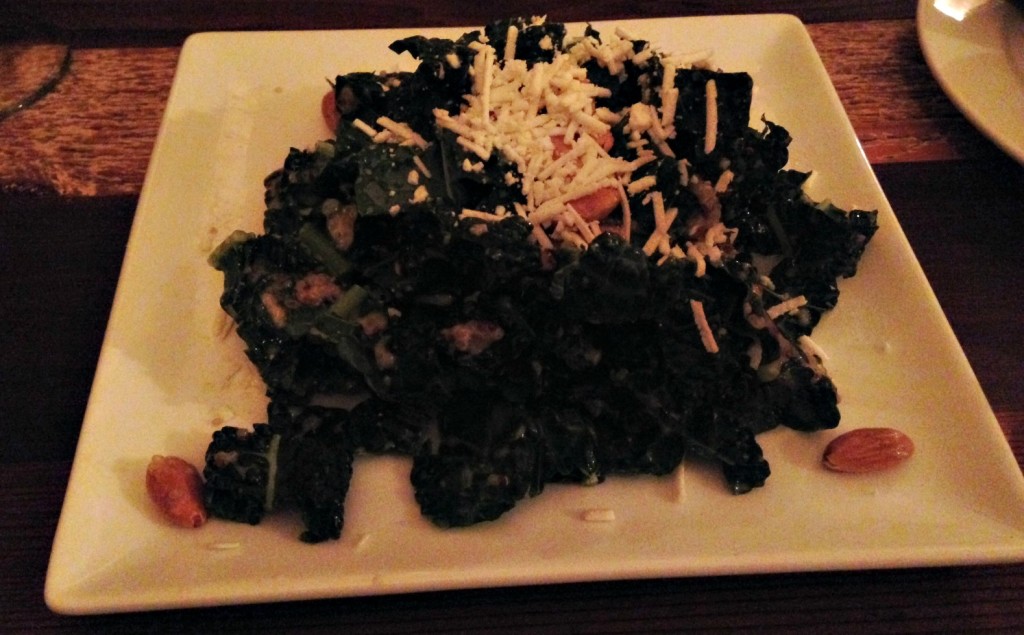 The warm cornbread and butter was also a nice touch. 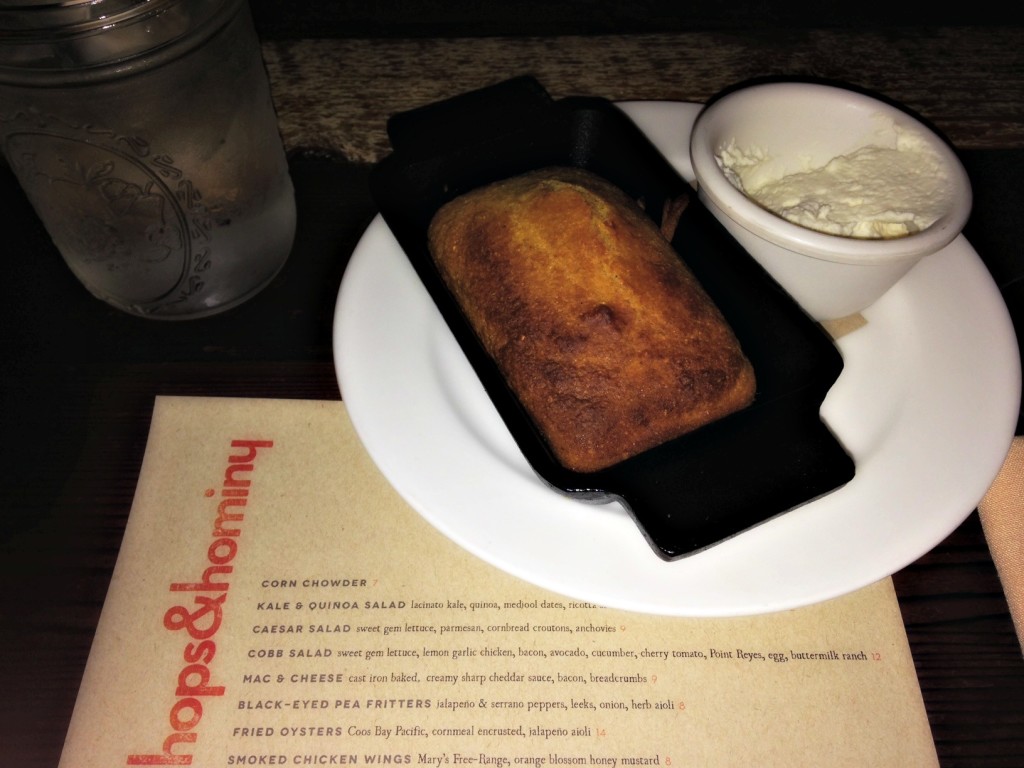 My entree of white fish was strong, and Dave raved about his shrimp and grits, which I didn’t photograph.

Next up was a delicious meal at neighborhood spot near our apartment called Nob Hill Cafe. They don’t take reservations, and they’re always busy. That’s because they serve solid Italian food in a no-nonsense way.

My top dish from Nob Hill Cafe was the melon and prosciutto appetizer. 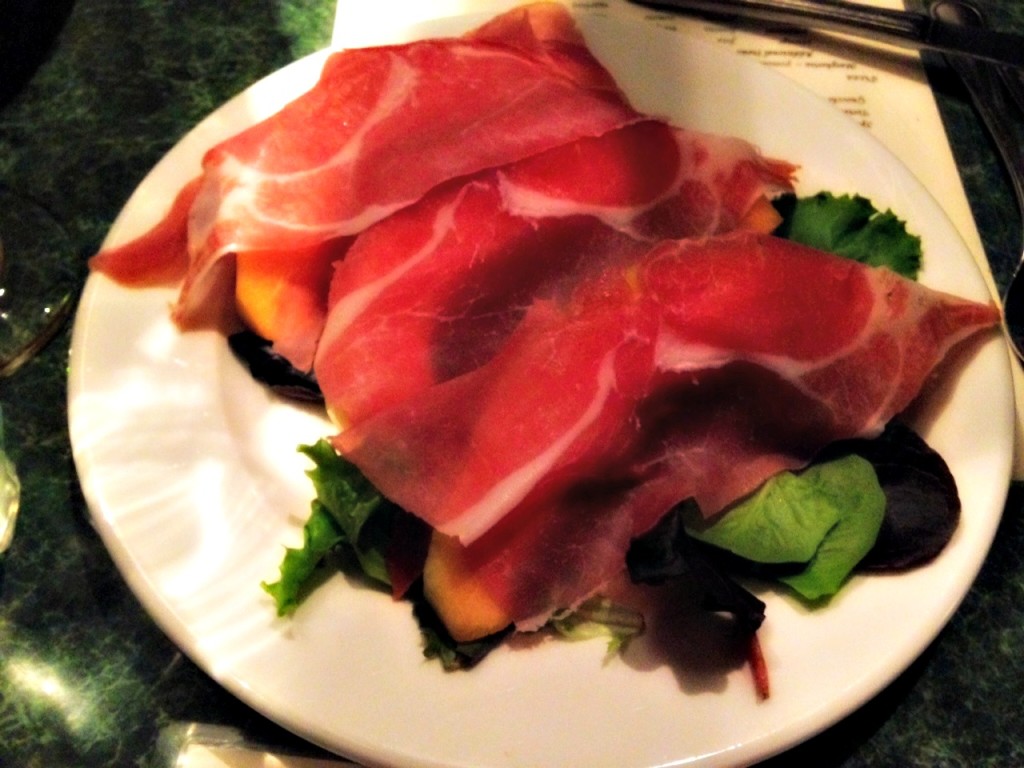 That was closely followed by this roasted eggplant salad with feta. 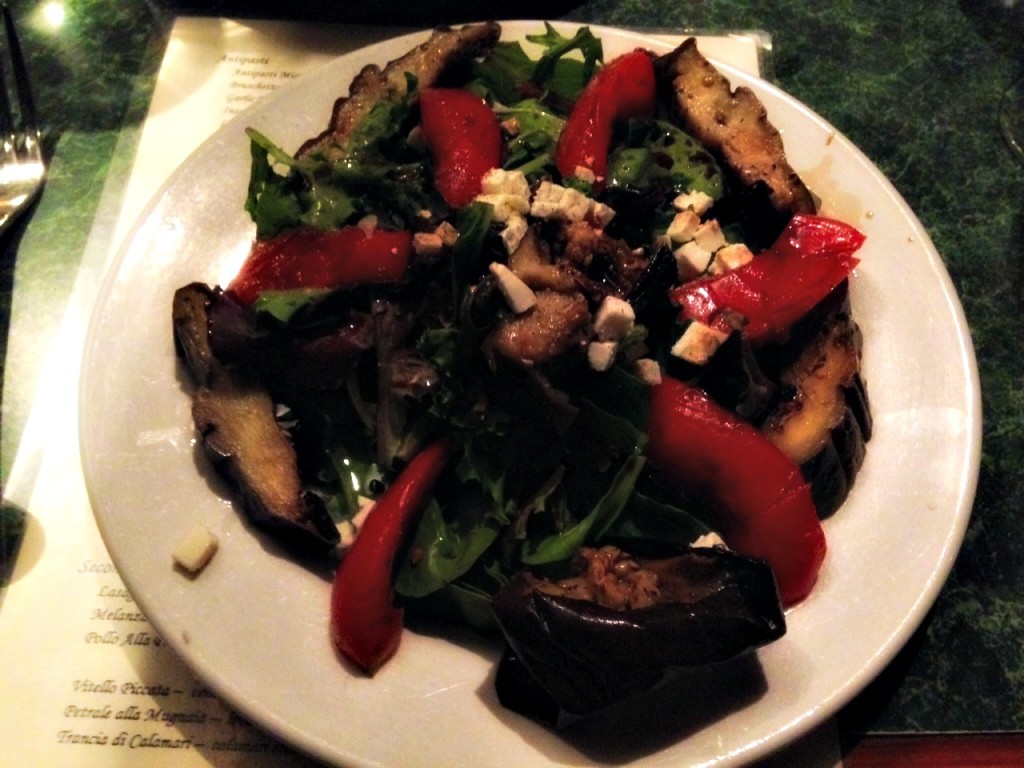 And this delicious grilled salmon with capers dish, which I ordered as my entree. 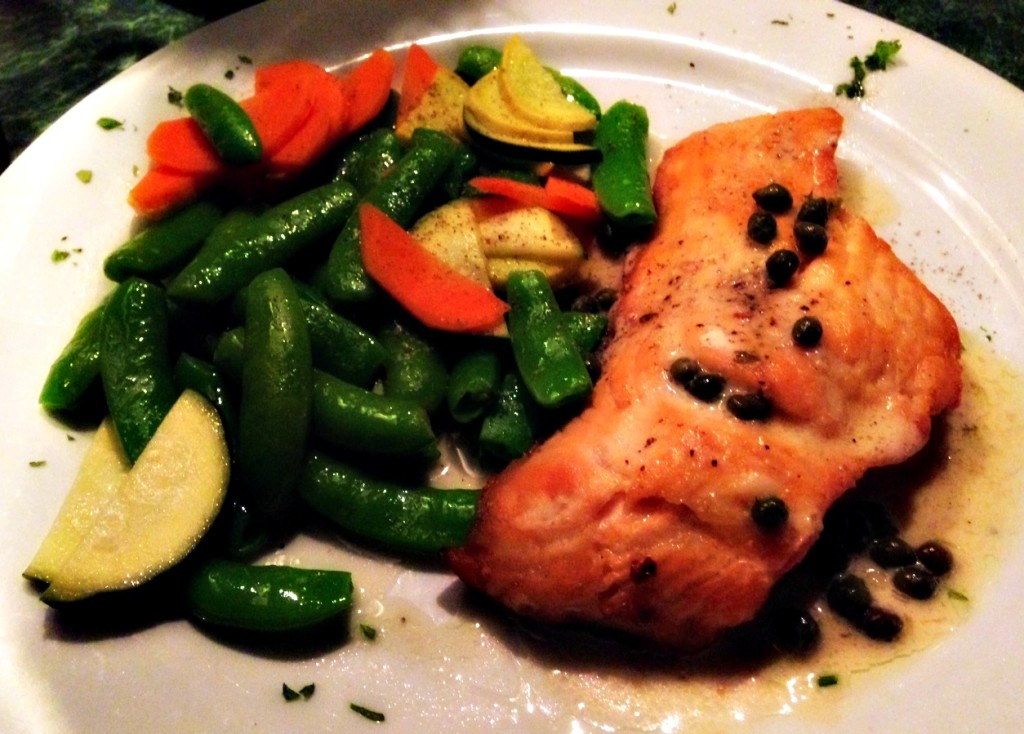 Dave had the chicken Parmesan that night, which was good, but he wasn’t overly impressed.

Finally, to celebrate our anniversary this weekend, Dave and I dined at Boulevard, one of the nicer well-known places in San Francisco, in which we made a reservation nearly six weeks out.

This was one of the best meals we’ve had in a long time.

First, there was the moist bread and sweet potato fries. 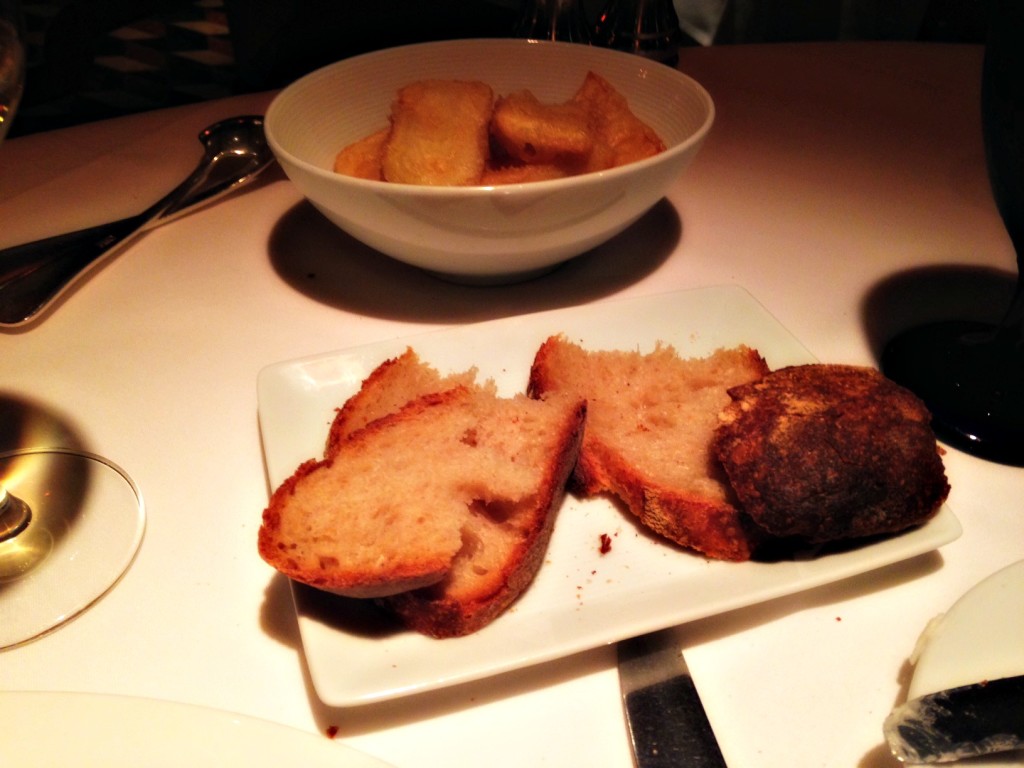 Then the tasty tuna poke with chunks of avocado. 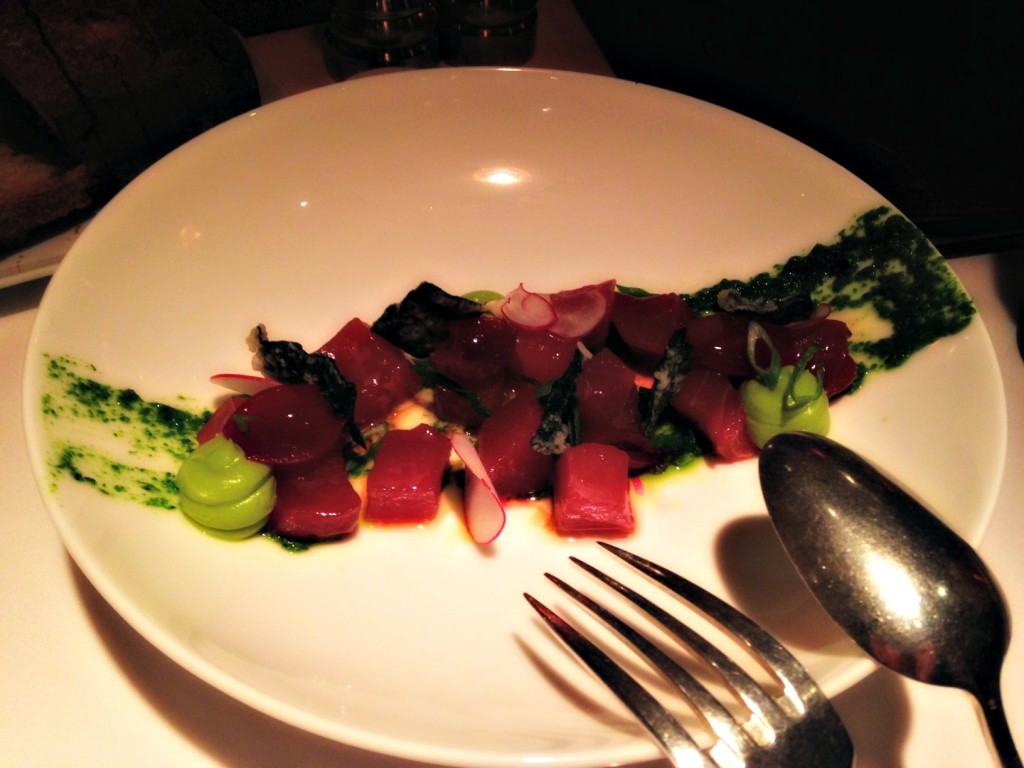 Then entrees. I had the salmon on top of brown risotto. (Yes, I do order salmon a lot.) 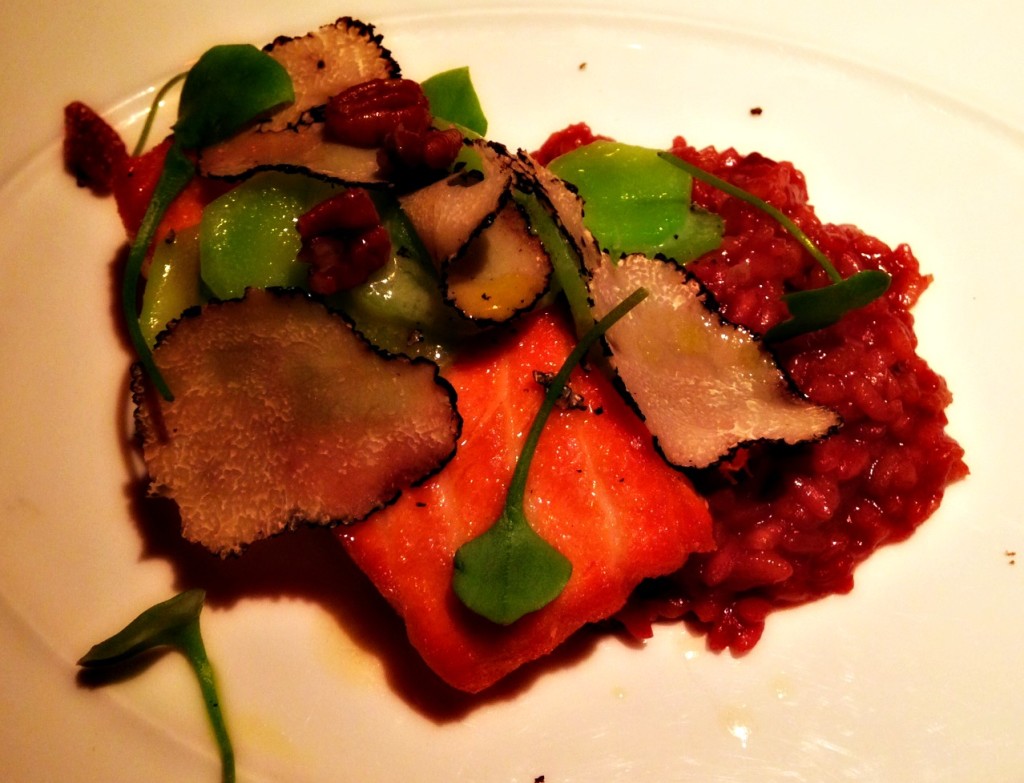 And Dave had the mouth-watering steak. 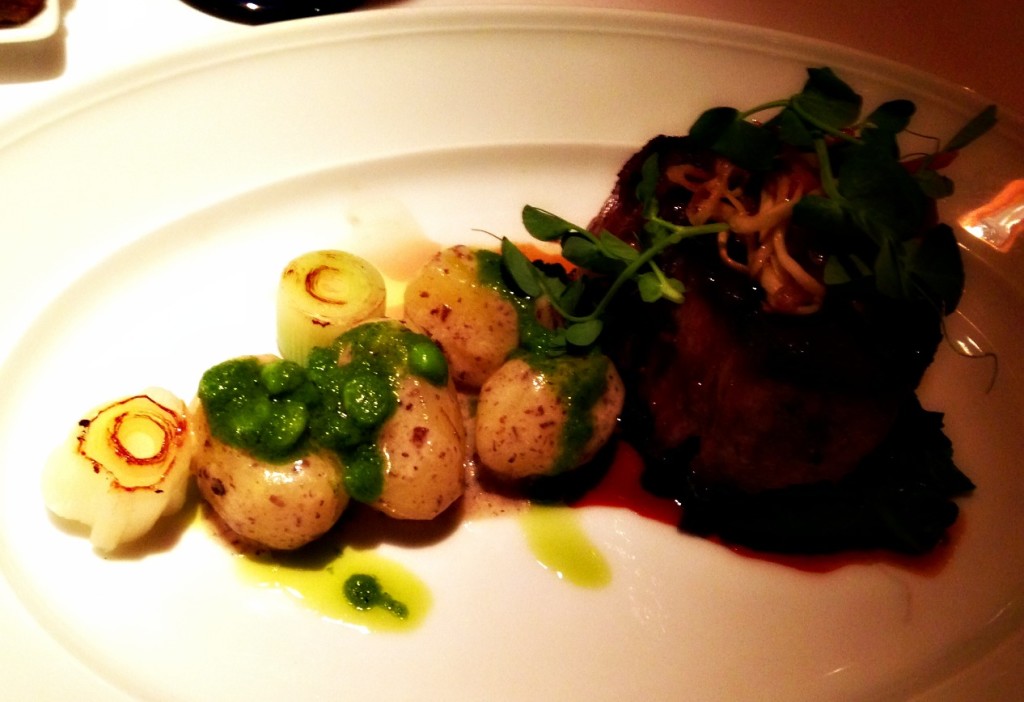 We loved Boulevard, and will be adding that to our list of favorite restaurants.

Please note: No desserts from these recent experiences are shown, because none were worthy. I’m pretty picky about my desserts and am not easily impressed. Hops & Hominy’s peanut butter mousse was only okay. Nob Hill Cafe’s chocolate cheesecake was quite tasteless. And we didn’t get dessert at Boulevard, instead opting for take-out from The Cheesecake Factory, a place which never disappoints.

My strategy for healthy-ish dining out

I wouldn’t say my strategy is really about anything other than moderation. Instead of having one “cheat meal” a week, which is something that a lot of fitness buffs swear by to rev the metabolism and give you a chance to indulge, I like to have “cheat elements” to a couple of meals a week.

When I go out to dinner, I always eat the bread, I always order wine and I always have dessert. However, I try to order an entree that is grilled, baked or roasted and one that comes with a lighter side, like veggies or brown rice. I steer clear of fried foods or anything on the menu considered creamy or covered in cheese.

Dave, on the other hand, goes with a different approach. He selects whatever he wants as an entree, sometimes even if it’s on the heavier side and then skips dessert. He’ll have a bite or two of the dessert, but it’s up to me to devour the sweets on the table. And I don’t mind the extra responsibility.

When you eat rich and decadent big meals once or twice a week at restaurants in a city like San Francisco, you just can’t say no to the good stuff. But sometimes, some simple mental ground-rules can help you navigate and narrow down your choices, in a smart-ish, healthy-ish way.

Do you prefer to dine out or eat in? Would you consider yourself a foodie?

What’s your healthy eating philosophy when out to eat?