“Zip it up” is a common phrase heard around the room at a Pop Physique Pop Sculpt class. It means straighten your legs, squeeze your thighs together and keep your glute muscles engaged. And if you can picture yourself holding that feeling, you get an idea of what you’re in for when you attend a class at this trendy studio.

But you may wonder, what’s in the name? Well, Pop Physique is a workout and lifestyle company that was created in Los Angeles in 2008 by a former ballerina and her marketing-guru husband. It’s a branded class, influenced by the tension between artistic expression and gentrification, which is supposed to provide participants with an escape from reality. Pop Physique promises to deliver better posture, improved body awareness and a way to achieve the “popular physique” of a long and lean dancer’s body.

There are two Pop Physique studios in San Francisco. And last week, I attended the studio’s signature “Pop Sculpt” class at the Russian Hill location on the lively and walkable Polk Street. 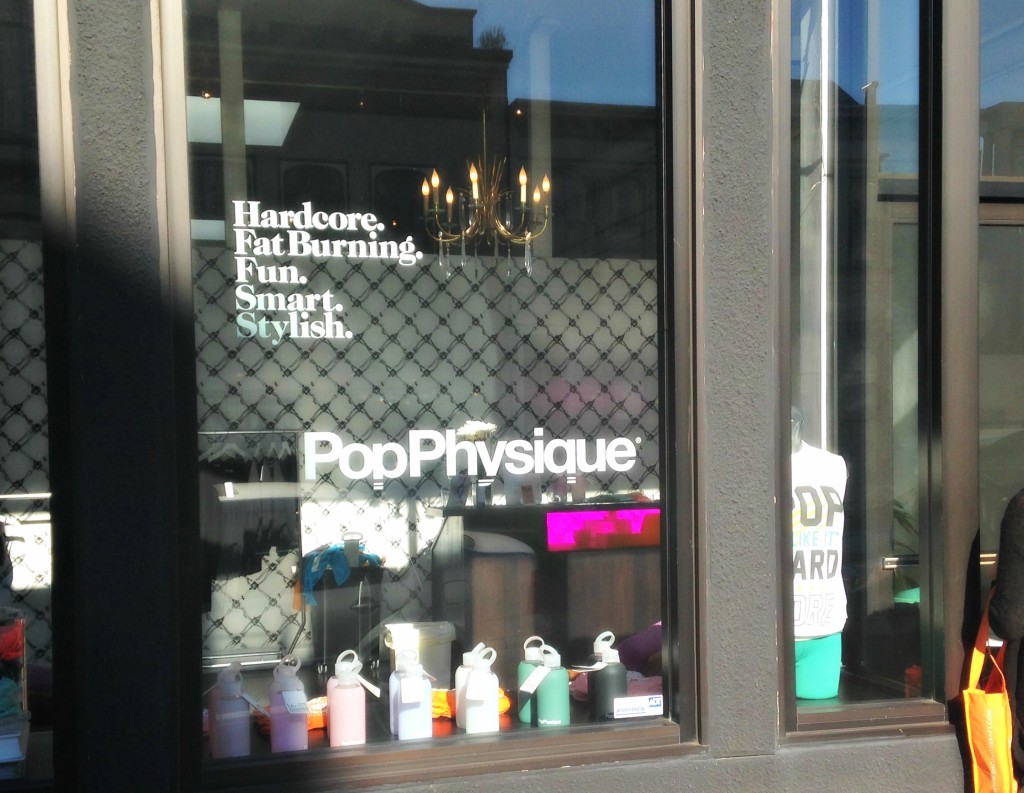 The outside of the studio is black, streamlined and looks much like any other boutique or storefront. But the inside is decorated with a lot of artwork and modern pieces, like a big chandelier and this awesome pink fridge. It was noticeably well-designed and seemed more like a Pinterest-decorated apartment than a place where you work out. 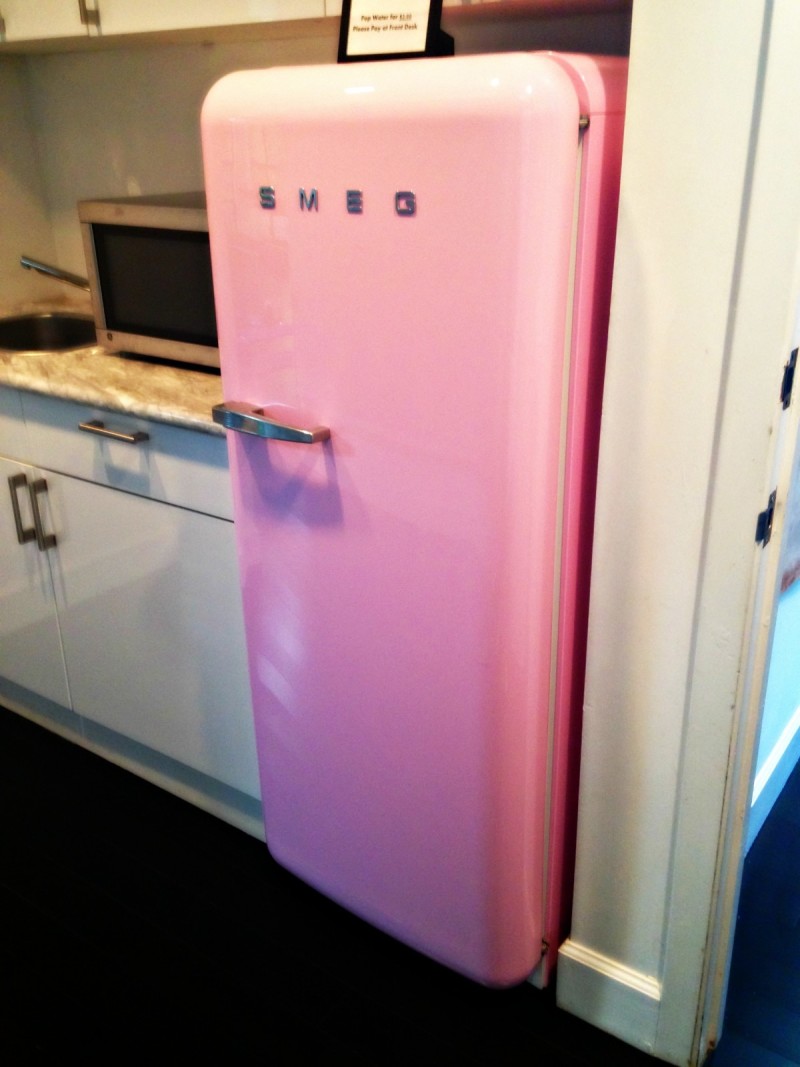 There are two rooms, which hold the same classes at different time slots, so more people can get in an out. Luckily, the class I took happened in the larger of the two. In fact, it may be the coolest studio space I’ve ever been to in San Francisco. The room opened up to an outdoor atrium with trees and greenery, which is pretty rare in the City. 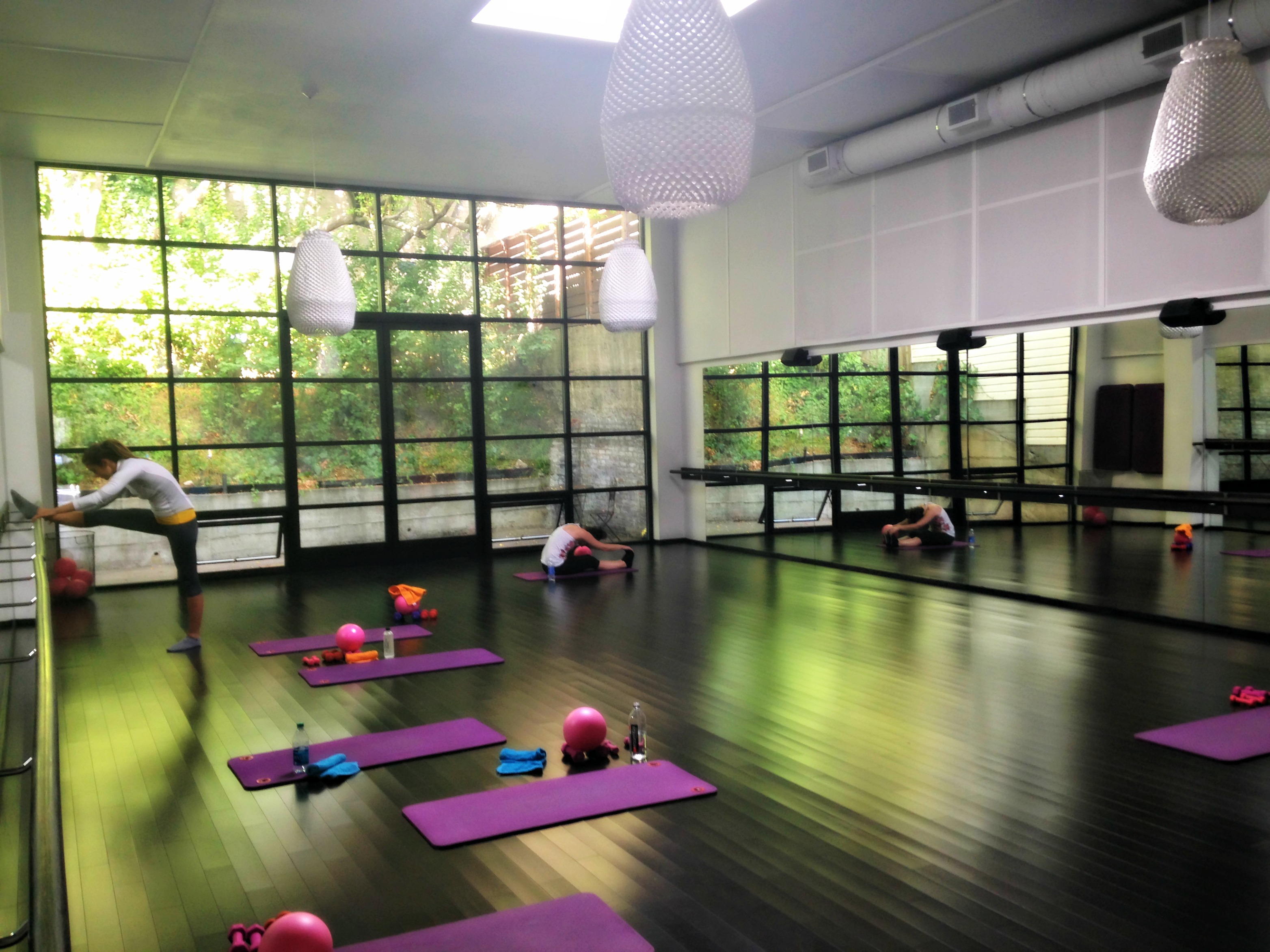 I attended class with my workout buddy and fellow trainer, Lauren, who also came with me to try Pure Barre a week ago. We set up in the front, ready to work and both agreed instantly that Pop Physique earned some major style points.

What to expect in a Pop Physique class

It’s barre inspired, so if you’ve been to a barre class then you will understand the basic moves of tucking your pelvis under, bracing your core and staying in positions until you hit fatigue.

You will sweat. You will work hard. And you will feel a burning sensation with a lot of little isometric pulses.

With loud techno music blasting in the background, a Pop Physique class keeps you moving and pulsing for a full hour, using a few brightly-colored toys. But the artistic portion of the brand is really just left to the setting and marketing, and I didn’t find that it was referenced within the choreography or workout moves. 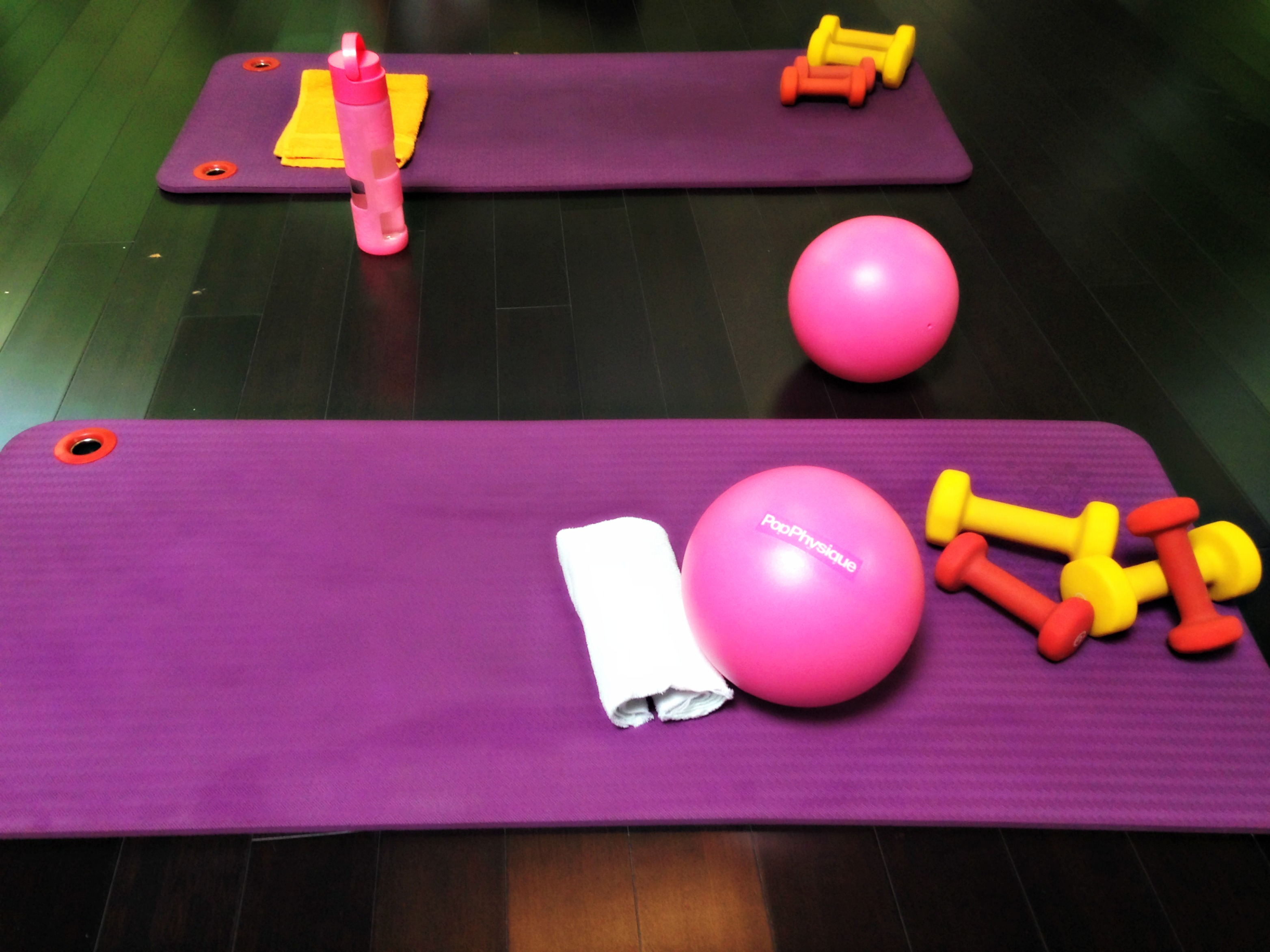 The class began with standing knee lifts to get our bodies warm. Then, we went right into a few down-dog stretches and plank holds, which lasted for a while. Then, we picked up light weights for arm work. The instructor suggested that we use a one-pound weight or no weight, and Lauren and I decided to go big and try the two-pound weights. The arm work, much like Pure Barre and Cardio Barre, took each muscle group to fatigue, so even though the weight was light, it was challenging. It was interesting to note that a lot of people in the Pop Physique class elected to use no weight at all during the upper-body portion.

During the light-weight portion, we tipped from the hip for tricep extensions and kickbacks, then did some shoulder work with our weights out front. This arm section went on for like five minutes, and our arms were burning. Then, we picked up heavier weights, which were four pounds, and did bicep curls.

That was all we needed the weights for, because after our arms were toast, we moved to the barre. We put the ball between our thighs for some pulsing, which was done while elevated onto the balls of our feet. Then, we held the ball between our legs for a seated position, which felt like it went on forever. We continued with more leg work, zipping up our legs, tucking our pelvis under and doing tiny kickbacks to exhaust the glute muscles. This section provided the most grueling burn for me, in fact my legs were shaking and tensing up so much I had to tap out a couple of times and come back in. After that, we did some core work under the barre with our backs against the wall.

I’ve decided I don’t like any “barre” core moves I’ve experienced as of late, which are ususally done while holding onto the barre and in a strange half-laying/half-sitting position. It just doesn’t feel right for me, even when I know it’s working. But everyone else seems to like it.

I thought I was in for a killer session in the beginning, because I started sweating during the first five minutes of arms. But truthfully, the intensity dialed down a bit and the rest of the hour was totally doable. I was just a bit winded, but wasn’t overly exerted. (Save for that time when I had to shake my legs out to continue in the kickbacks, of course.)

Anyone could walk in and give this workout a try, but you’d be much better served having taken an introductory barre class ahead of time. The instructor did give excellent coaching cues and physically adjusted people to assist, but there was no initial welcome or introduction on what to expect within the hour.

If we’re comparing barre-fitness branded classes: Pop Physique is more challenging than Pure Barre, but probably not as challenging as Cardio Barre.

However, I’ve been told that every instructor teaches their Pop Sculpt class a bit differently, even down to the music, so I’d be interested to experience someone else’s class. I wasn’t really a fan of the techno music, as it sort of seemed like it belonged in the background of a fancy sushi restaurant and not as the basis for a workout.

The instructor was straight-to-the-point, gave clear directions, demoed the move once or twice, then walked around and corrected people. However, she wasn’t super bubbly, nor did she show a lot of personality throughout class. But she did have purple hair and an awesome outfit, so I guess that makes up for it, because she fit in with the design aesthetic. After-the-fact I thought about it, and I bet her lack of personality was actually just the fierce and direct coaching that she was taught to do for the class according to the brand. So I really do need to experience again to be sure.

The high points of Pop Physique

Outside of the setting and clear instructor cues, there were a few additional positive things to note: The instructor was huge on breathing, which I really appreciate. She continued to remind us to take big exhales during the moves, a point I always have to drive home to my clients. She also touched people to adjust them, another thing I look for. And just like in Pure Barre, she carried the music remote around with her and turned it up and down as needed. She was sure to pump up the volume to power us through the last of each set, and she counted everything out for us succintly, which was helpful.

Pop Physique’s Pop Sculpt class is definitely not as user-friendly as Pure Barre or as welcoming as Cardio Barre. It seemed a little more stuffy, cold and prissy, while at the same time much more chic and cool. All of the women (yes, this was another barre class with only women in attendance) looked to be around the same age, and they all seemed to know what they were doing. Nobody really spoke, they just got down to business and then left.

All of that aside, it’s a great low-impact workout that anyone can do and includes valuable resistance training with light weights. Once again, like the other barre classes I’ve taken, this class would be an awesome addition to a fitness routine, but should be complemented by additional cardio and heavier weight training. It’s safe to do a few times a week, and would definitely deliver long and lean aesthetics if you went regularly.

Lauren and I walked out of Pop Physique glad we had experienced what it was all about. Even as first-timers, we held our own … 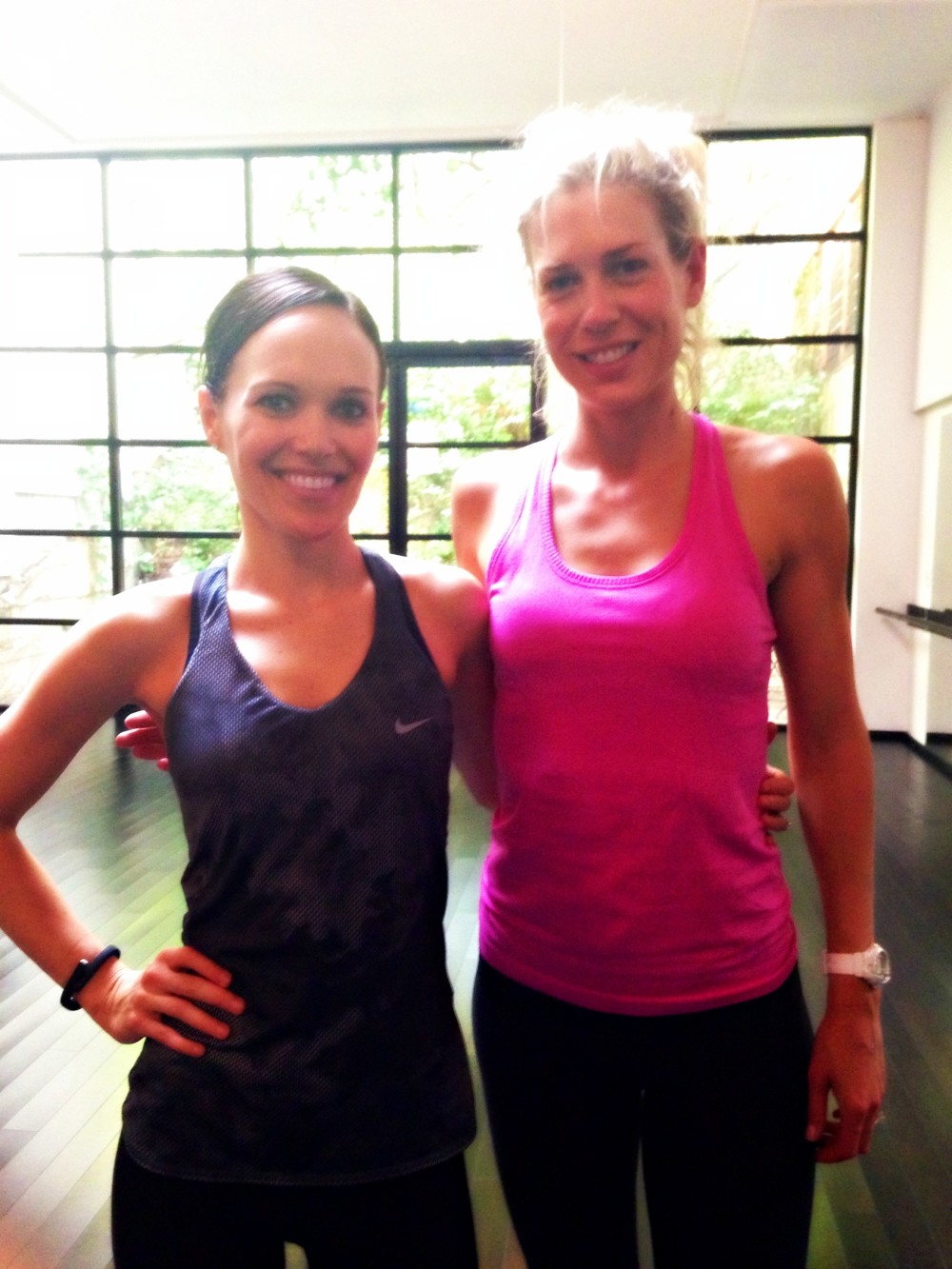 What’s one thing I would suggest after experiencing Pop Physique? Grippy socks, my friends. I had on regular socks and my feet were sliding around the dark-wood floors, which was not very cool of me in such a trendy setting. Oh well.

* Disclaimer: I attended the class at Pop Physique for free, as part of my complimentary one-month membership to ClassPass. Learn more about the ClassPass program in San Francisco in my post about the service.

What type of music do you like to work out to? What’s your favorite band these days? Have you ever tried a Pop Physique class?