As an instructor, it takes a lot of time to prepare and debut a brand new Les Mills BODYATTACK group fitness release, but it’s always worth it — that’s for sure. In October, I launched the latest Les Mills BODYATTACK release 90 in my classes around the San Francisco Bay Area, and it’s finally time to talk about the moves and the music. These reviews are for instructors, participants and anyone interested in good workout songs and exercises, so please enjoy …

Background on the BODYATTACK program

First, here are a few things you may want to know about BODYATTACK:

For the nitty-gritty on BODYATTACK, head on over to my post on BODYATTACK tips for first-timers, or check this out straight from the folks at Les Mills:

BODYATTACK™ is a high-energy fitness class with moves that cater for total beginners to total addicts. We combine athletic movements like running, lunging and jumping with strength exercises such as push-ups and squats. A LES MILLS™ instructor will pump out energizing tunes and lead you through the workout – challenging your limits in a good way, burning up to 730 calories and leaving you with a sense of achievement. 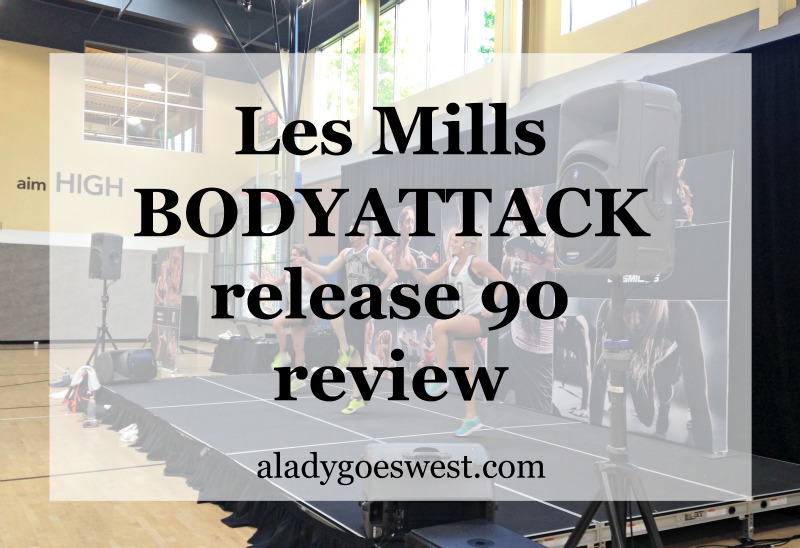 Overall, my thoughts on BODYATTACK 90:

And now for a track-by-track breakdown, with links to some of the music. (However, not all are exact versions of the songs used in the release.)

There are a lot of tough combinations in this release, so you’ll need to be very clear with coaching. Also, make sure you give plenty of options in the first set of all of the moves, so everyone can be successful. I’d also recommend reading the “Track Focus” for each track and ensuring that you’re hitting what is suggested and not saying too much. For more tips, check out: Top 10 ways to grow your group fitness classes.

BODYATTACK 90 moves quickly and there are a lot of combinations, so you’ll have to count and focus during the entire workout. Have fun with it and be sure to keep breathing, lift up your chest and land every single jump with soft knees. Enjoy it! For more tips, check out: How to get better results from group fitness classes.

If you want to hear some more talk about Les Mills, check out the all of my previous posts under the Les Mills tab.

Have you ever tried BODYATTACK?